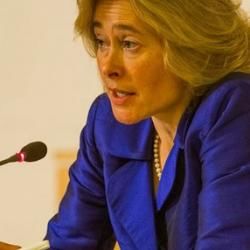 Dr Julie Smith (Baroness Smith of Newnham) is a Fellow in Politics and Graduate Tutor at Robinson College, Cambridge, and was Director of the European Centre in the Department of Politics and International Studies, Cambridge University from 2013 to 2019. Since 2016 she has been Co-Director of the MSt in International Relations, the two-year part-time Masters programme co-organised by POLIS and the University’s Institute for Continuing Education.

Julie read PPE at Brasenose College, Oxford, and took both her MPhil and DPhil in Politics at St. Antony’s College, Oxford. She was a Hanseatic Scholar in Hamburg and prior to coming to the Centre of International Studies in Cambridge in 1997, Julie taught in the International Relations and European Studies Department of the Central European University in Budapest.

Changes and Challenges for the EU in the Post-Brexit Scenario