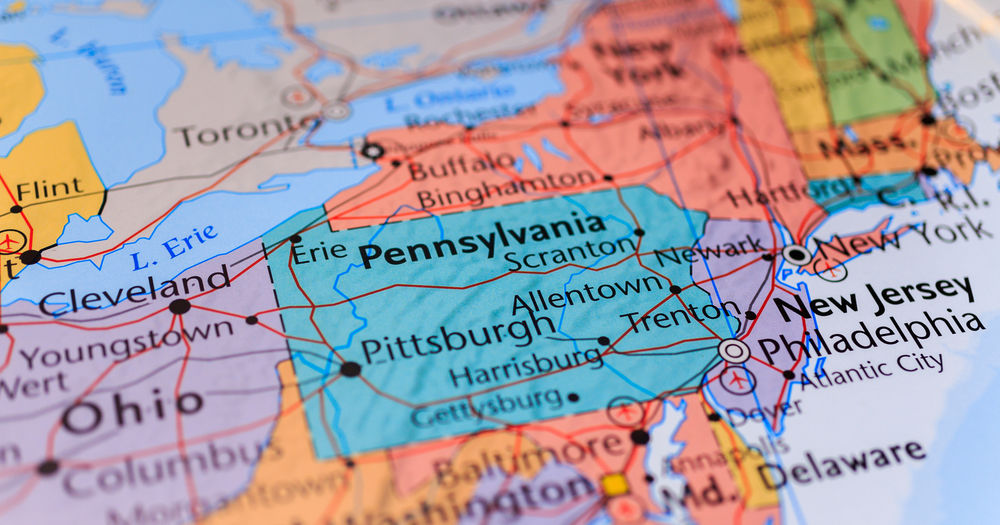 A Closer Look at Pennsylvania

In 2016, Pennsylvania has elected a Republican presidential candidate for the first time since 1988. The result was decided by a razor-thin margin of 44 thousand ballots, out of a total of over 6 million cast, and the state’s 20 electoral votes—the fifth most in the Union, tied with Illinois—went a long way toward swinging the Electoral College to Donald Trump. Pennsylvania, a former brick in the “Blue Wall” of states that had up to that point voted Democrat in every election since 1992, is widely seen a swing state in the 2020, and part of a special subset also comprising Wisconsin and Michigan that also delivered an upset victory to Trump. As such, it will likely attract special attention during this election cycle, and below are a few factors to take into account when watching the race.

Several relevant metrics show that, at least at this point in the race, President Trump appears to have lost ground in the state since 2016. He has consistently trailed Joe Biden in statewide polling matchups, has had his approval in the state drop 11 points since he took office, and voters who voted for Obama in 2012 but turned out for Trump four years later—a key demographic across the three former Blue Wall states—are souring on the President: a study last year showed that their support had dropped 19 points in two years. Overall, however, at 66%, the President is still popular among Democratic defectors in the region, and there is reason to believe that his economic message will resonate again.

This is despite the fact that Pennsylvania was hit hard by the Coronavirus pandemic. At one point, the state was trailing only California in the number of jobs lost, and has had the eighth highest number of virus-related deaths. Manufacturing, which is looking like a top local issue in the 2020 campaign and accounts for 12% of the state’s annual economic output, was also badly affected, as seen in the chart below. 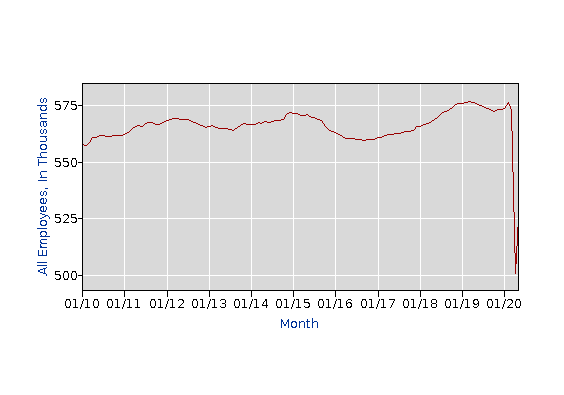 Employment in Manufacturing in Pennsylvania. Note the drop in April 2020.

It should come as no surprise, then, that in a poll last month, only 43% of Keystone State voters had a favorable view of Trump’s performance on the issue, while Governor Wolf, a Democrat, stood at 64%. Yet there is a strong argument to be made that this is as much an opportunity for the President as it is a potential handicap. This is because, as FiveThirtyEight has shown, the direction of economic activity—especially the manufacturing index—might be a better predictor of electoral success than the current state of the economy. And the above chart also reveals a sharp bounce-back after the April 2020 slump (also reflected in the overall unemployment rate), which, if it persists into November, might make voters less inclined to vote for change, especially when this potential development is combined with the pre-coronavirus  gains (as modest as they have been) in the total number of manufacturing jobs, including in electorally key counties, under the Trump presidency.

Meanwhile, Joe Biden can find cause for optimism in the simple fact that he is not Hillary Clinton. This may seem trivial at first glance, but its importance should not be understated, as there are multiple signs suggesting that the 2016 Pennsylvania results were in no small part an imprint of the former Secretary of State’s unpopularity—which has proved to be so persistent that even recently she was measured to be less popular among the general populace than either 2020 candidate. Perhaps most striking is the increase in third-party voting between 2012 and 2016, from roughly 70 thousand to 200 thousand. While it would be a mistake to see this as a means of protesting against Clinton alone, further data also reveals her relative weakness as a candidate in the state: in two key counties, for example, she performed considerably worse than Barack Obama, with a swing of 23 thousand votes to Trump in Lackawanna, and 32 thousand in Luzerne­—which alone account for more than the 44 thousand votes with which she ultimately lost the state. Moreover, recent polling shows that Biden leads among 2016 third-party voters in battleground states by 35 points, as well as by 17 points among those who did not vote in that election.

Finally, it will be instructive to see how the geographic realignment of voters comes into play in November. Notably, as the Philadelphia suburbs and the southeastern part of the state experience population growth, the suburbs are continuing their shift from Republican belt to a Democratic one—leaving most other places with declining populations, especially in the west, trending more Republican. One of the main reasons is that new suburban residents tend to be more racially diverse, better-educated, and younger—a recipe for Democratic-leaning politics. Accordingly, the number registered Democrats in Philadelphia suburbs has risen by 75% over the past two decades, while the number of registered Republicans has dropped by 14%. The question, of course, is whether these voters will actually turn out to cast ballots in the election, as most inactive Democrats in the state outnumber inactive Republicans almost two-to-one, and young voters’ lack of enthusiasm for Biden appears to persist.

In short, there are notable developments underpinning Biden’s polling lead in the state, but it could still go either way. The President can point to the moderate uptick in manufacturing jobs as a major campaign promise kept, and hope for dynamic economic recovery after a (politically) bungled pandemic response to shift the general mood in his favor. On the other hand, with no considerable third-party challenge on the horizon, the waters are less muddied at this point than in 2016, and if this continues to be the case, Biden can especially be to reap the benefits of not having Hillary Clinton’s considerable 2016 handicaps. Its 20 electoral votes and incredibly close 2016 results make Pennsylvania one of the most crucial races to watch in 2020, and all of the abovementioned factors have the potential to feature prominently in campaign post-mortems.