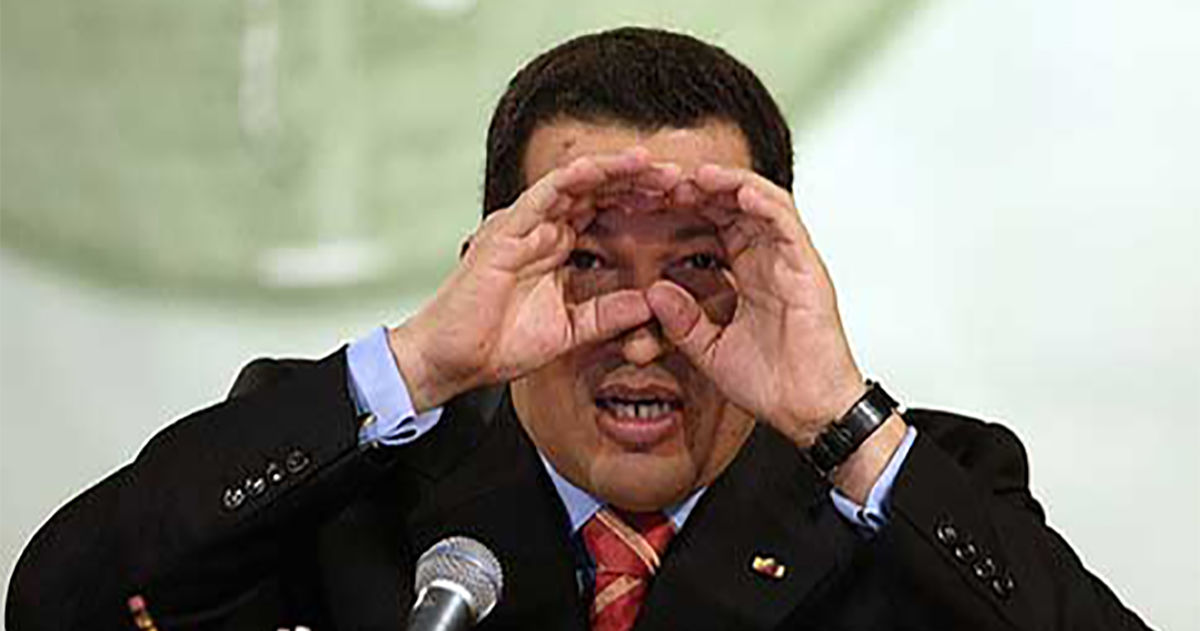 A friend in need is a friend indeed

Since its ascendance to power in 1998, Chávez, and following his death, his successor, Maduro, have put a lot of energy into the establishment of a regional framework for their regime. As a part of these efforts, they wanted to create a strong regional system of alliances. Now, this year’s anti-government protests and the international reaction to them made it possible to stress test the Chavist model.

Since this spring, as the conflict between anti-Maduro forces and the ruling PSUV (Partido Socialista Unido de Venezuela—United Socialist Party of Venezuela) has become more intense, much has been said about the contradictions in the Venezuelan system, about its economic troubles, and about the international protests against the government which takes increasingly desperate steps to retain its power. There are also a few other countries, though, that have been lending a helping hand to Maduro in a direct or less direct way and contributed to its survival. The way they act is also a good showcase of how successful Chávez was in forging alliances since 1998, the year he was elected president. 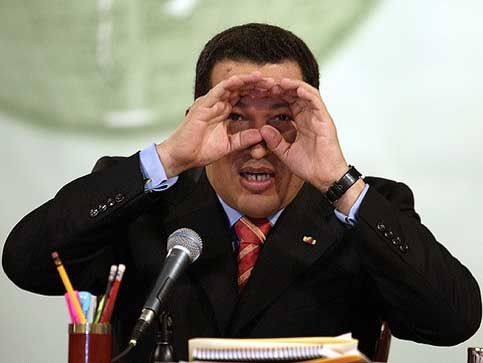 Chávez, who died in 2013, built his alliances on several different levels. He tried to unite Latin American and Caribbean states economically in an alliance called ALBA (Alternativa/Alianza Bolivariana para los Pueblos de Nuestra América—Bolivarian Alternative/Alliance for the Peoples of Our America) to counterbalance similar attempts by the U.S. This organization has eleven members now, among them Bolivia, Cuba, Ecuador, Nicaragua and many Caribbean states. Using Venezuela’s significant oil reserves as a leverage, Chávez proceeded to widen its sphere of influence and created Petrocaribe, an alliance whose 17 members could buy oil on a preferential basis. After the leftist takeover in Latin America during the first decade of the new millennium, Chávez also sought to have closer ties with the southernmost parts of the continent. In order to do so, he resorted to the vast amount of hydrocarbon reserves of Venezuela, while also playing on the ideological similarities. In the long run, his goal was to export his regime and create a Latin American counterpole to the United States. 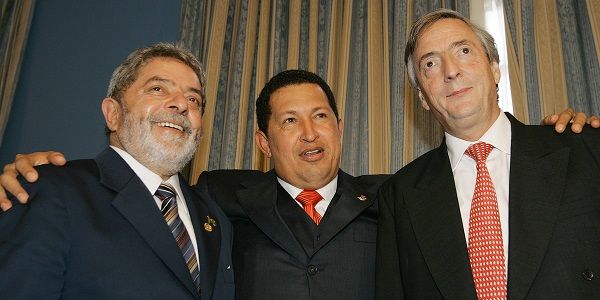 The three big allies: the Brazilian Lula, Chávez, and the Argentinian Kirchner
Source: Wikipedia, made by Ricardo Stuckert/PR, licence: CC BY 3.0 BR

It is also worth to mention Cuba, as this is the country with the closest ideological links to Venezuela. As Chávez himself affirmed during his visit to Havana in 1999:

“Venezuela is going towards the same sea which the Cuban people are going to; towards the sea of happiness, real social justice and peace.”

—and, as a matter of fact, he could never be generous enough when it came to giving oil to the revolutionary country of his role model.

When troubles started looming this year, the help coming from this network of regional alliances showed a mixed picture. When the Organization of American States (OAS) wanted to summon a meeting on the Venezuelan situation this March, 19 out of its 35 members declined the resolution. Bolivia, Ecuador, Nicaragua, Suriname, and Caribbean states such as Antigua and Barbuda, Haiti, Saint Kitts and Nevis, Saint Vincent and the Grenadines, Saint Lucia voted against it, while El Salvador and the Dominican Republic stayed away from the voting. The situation remained the same during the subsequent meetings of the organization, which were hibernated by the following statement from the president-in-office:

“I do not want our hemisphere to continue breaking apart anymore. We need to look for solutions, to continue the dialogue and the only way to continue this dialogue is to keep this session open without a determinate date.”

The Caribbean allies had a crucial role in closing this session between the 19th and 21st of July without any resolutions. Bolivia, Ecuador, the Dominican Republic, and Nicaragua, i.e. Venezuela’s ideological brothers in arms took an equally important part in the deadlock.

Among the above, Bolivia is definitely Venezuela’s most vocal supporter. Its president, Evo Morales, stood up for Maduro and its regime on every possible forum with statements like:

“As we defend Venezuela, we defend whole Latin America from the intentions of the North American government, which wants to take possession of the natural resources the regional countries have.”

His Twitter stream is a gold mine for those who wish to understand what politicians that support Venezuela actually think about this year’s events. 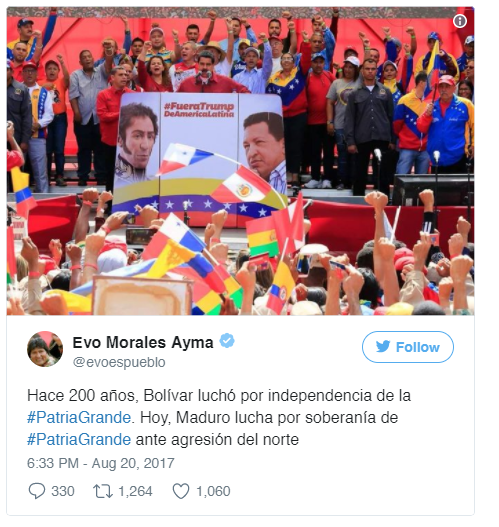 The champion of the South—Evo says: “200 years ago it was Bolívar who fought for the independence of the #PatriaGrande [this is how the South American union, the dream of the freedom fighter Simón Bolívar, is called]. And today, it is Maduro who fights for the sovereignty of the #PatriaGrande against the Northern aggression.”
Source: Twitter

The outgoing president of Ecuador, Rafael Correa was equally eloquent when it came to standing up for Maduro:

“We send all our support to the Venezuelan people, who are mostly non-violent, honest, and industrious; and we also send our entire support to the person we absolutely trust, to our friend, Nicolás Maduro.”

The new president following Correa in May, Lenín Moreno, has not changed the ideological orientation of the country, so it is no wonder that after his investiture he also issued a statement claiming respect for Venezuela’s independence.

The Nicaraguan president, Daniel Ortega, whose equally authoritarian regime was cemented not at least by the low-priced oil and the investments flowing from Venezuela, has certainly had his share of problems this year, since the OAS has a case against it, too. Accordingly, the leader of the small Central American state probably had to restrain himself, although the president of the Venezuelan National Assembly feels that

“Daniel Ortega has been the worse adviser Nicolas Maduro has ever had during his attempts to destroy democracy. […] One of the things we most fear here, in Venezuela, is what we call the Nicaraguan scenario, namely, what Daniel Ortega has done in his effort to change electoral laws and set aside political parties in order to have elections the way and with the parties he fancy. And this is what Nicolás Maduro wants to emulate.”

Despite his cautious attitude, he ended up showing solidarity with the Venezuelan government, although experts have claimed he should continue to keep silent about that country.

Little wonder that the above-mentioned regional organization, ALBA, has also issued several statements to defend Venezuela, while stating in March that:

“Defending Venezuela and its revolution is not an exclusively Venezuelan problem. It is a cause that brings together everybody who fights for the true Latin American and Caribbean independence. Today, it is Venezuela where the 21st century Battle of Ayacucho is fought [this battle was the last major continental military encounter between Latin American independence movements and the Spaniards].”

Cuba, which, along with Venezuela, was the main initiator of the ALBA and was in the past the greatest beneficiary of Venezuelan oil (a situation that Havana most probably wants to maintain), is also fully supporting Maduro, although it has less relevance on the international stage. Nonetheless, the way Raúl Castro envisages the shiny future of its brother country in his letter to Maduro may give some food for thought:

“Surely, there will come days of intense struggle, of international harassment, of blockades, of limitations; but they will also be days of creation and work for revolutionaries and all the Venezuelan people who, as before, will not be alone and will have us Cubans, in the front line of militant solidarity and more committed to their cause.”

The support provided by the regional allies to Venezuela goes beyond the one described above, as they can also effectively support the Venezuelan government’s position in several other regional organizations. UNASUR (Unión de Naciones Suramericanas—Union of South American Nations), for example, approved a resolution condemning Venezuela in March, which Ecuador and Bolivia declined to sign. While MERCOSUR (Mercado Común del Sur—South American Common Market), on the other hand, managed to suspend Venezuela’s membership, Evo Morales was not willing to sign this resolution either.

The statements and resolutions by the two organizations mentioned above also reveal that the decline of the Latin American left has slowly been eating away at Venezuela’s former network of alliances. Actually, the country has lost two of his major allies on the Southern Cone recently: Argentina and Brazil. And this time, the Brazilians were exactly the ones who pushed for Venezuela’s suspension at MERCOSUR most unyieldingly—on the day of the suspension, the Brazilian Minister of Foreign Affairs even commented on his Twitter:

“A democratic government cannot remain idle having a dictatorship by its side. This is my posture, but also the posture of Brazil.” 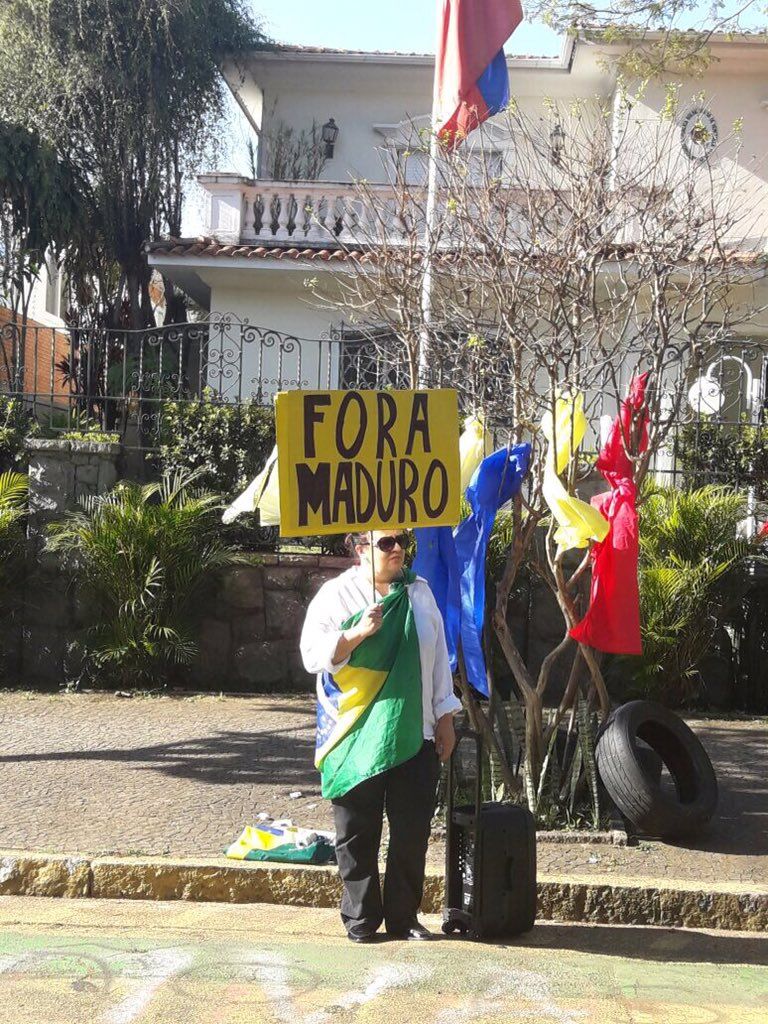 A few day later, representatives of Argentina, Brazil, Canada, Chile, Columbia, Costa Rica, Guatemala, Honduras, Mexico, Panama, Paraguay and Peru came together again only to condemn the Maduro government in yet another statement.

However, it also should be added that anti-U.S. sentiments—which are, as some of the quotations above might have already made it plain, deeply rooted in Latin America and thus widely exploited by pro-Maduro statements and the Venezuelan governmental rhetoric—are still capable to hammer out a consensus in the region; a consensus that might even favour the broadly condemned Maduro government. Namely, when Trump made some bellicose declarations hinting at an eventual military intervention, the whole region opposed it as one man suggesting that the U.S. had better keep away from the Southern affairs.

It is common sense that Maduro’s regime is highly dependent on not only the domestic opposition and the hostile international community, but on the future behaviour of its allies. This behaviour might be influenced by several factors. Presumably, those who side with it out of pure ideological considerations will not change their attitude anytime soon. Maduro is likely to expect help from Lenín Moreno or Evo Morales in the future—although Daniel Ortega’s case proves that certain situations might override ideological unity. On the other hand, providing that the decline of the Latin American left will continue, the country can end up deprived of a growing number of its ideological allies. Cuba seems to be the sturdiest link, since its ideological foundations greatly overlap with Chavism, and, lacking any other viable options, it will fight with any possible means to maintain the source of cheap oil that it finally found after the Soviet shipments had come to a sudden halt with the end of the Cold War.

The attitude of Caribbean states might turn out to be even more thought-provoking, since it is uncertain how long they are willing to beat the dead horse and stay loyal to the present Venezuelan government after the oil stops flowing from Petrocaribe.

One thing is sure; Maduro and its government cannot just sit back and wait, as, while time is ticking away, their options are shrinking, and, notwithstanding its keen regional allies at present, its isolation may turn unbearably burdensome in the not-too-distant future.

Author’s note: For reasons of brevity, this article does not intend to present Venezuela’s system of alliances outside the region, though they are even more important for its survival in the long run.