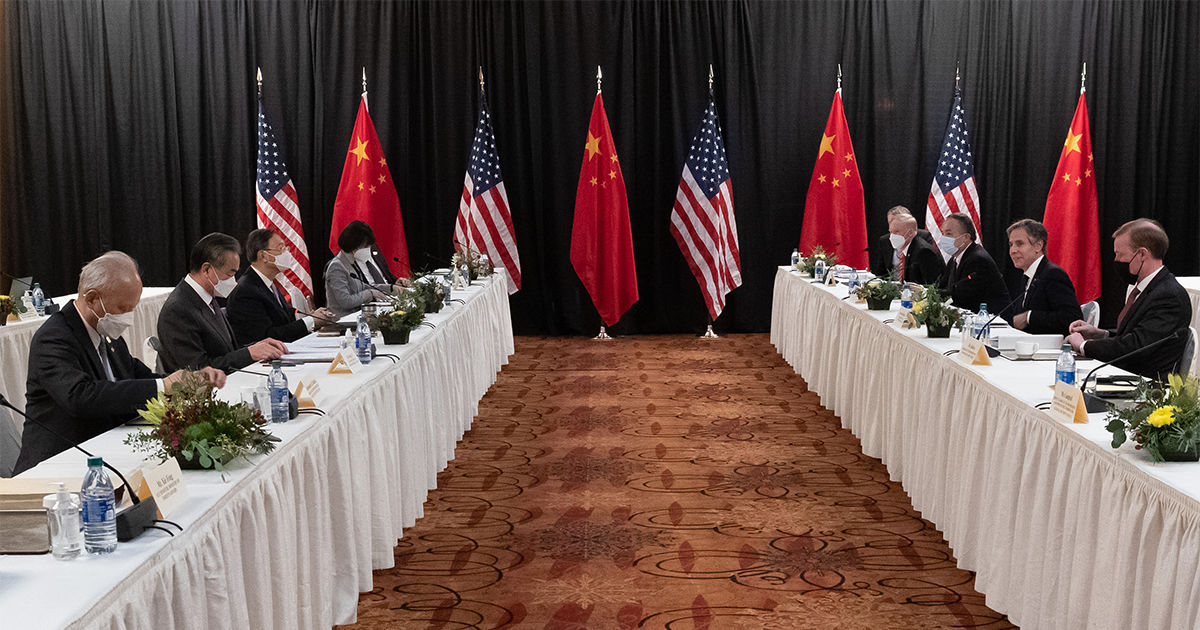 For the first time since President Joe Biden’s inauguration, top officials of the US and China had a discussion about their standpoints and interests. Although the expectations were low before the talks had even started, the harsh tone of both sides towards each other caught some experts off guard. What happened exactly during the meeting, and what can be expected moving forward? This article hopes to answer those questions in more detail.

There could not have been a more fitting place to be found than Alaska for breaking the ice between the two superpowers, the US and China. Meeting (almost) halfway, still on US territory, seemed convenient for both parties to begin their discussion about their standpoints and interests for the first time since President Joe Biden had taken office. Representing the US government, Secretary of State Antony Blinken and National Security Adviser Jake Sullivan were present, while the high-level Chinese officials tasked with participating in the meeting were top foreign policy official Yang Jiechi and Foreign Minister Wang Yi. When the talks were announced, experts had very little hope that any actual solution would come out of the discussion. This belief was even reinforced when an official, who briefed reporters before the meeting, said that the two sides would not deliver a joint statement after the meeting and no major announcements were to be expected as a result of the talks. However, it is still worth keeping a close eye on what happened there, as the talks could set the basis for the next four years of international politics.

While the expectations were already low, there was a sequence of events that had set somewhat of a negative tone for the meeting before it even started. For one thing, the joint condemnation of Chinese maritime actions by the US and Japan on 16 March was not a good omen for the discussion between the US and China. Still, Zhao Lijian, the deputy director of the Chinese Ministry of Foreign Affairs Information Department, told the press that he hoped the Alaska meeting could help “manage differences,” and urged other countries to “stop forming the anti-China clique.” Besides, the Biden administration sanctioned twenty-four Chinese officials for undermining Hong Kong’s autonomy, which seemed like a calculated step taken by the US in an attempt that could be intended to show US interests in upholding existing democratic systems around the world a few days before a discussion with China.

At the same time, Chinese officials called the upcoming Alaska meeting a “high-level strategic dialogue,” expressly claiming that they were looking for dialogue, not confrontation. Meanwhile, the US stated that it was looking for “deeds, not words” to improve relations, and the EU had applied sanctions against a number of Chinese individuals over human rights abuses in Xinjiang just before the meeting in Alaska started. The EU’s decision ultimately showed that it was ready to cooperate with President Biden on China, which could give the Transatlantic alliance a push for more successful collaboration after President Trump’s term.

The previous turbulences notwithstanding, the bilateral meeting took place in Anchorage, Alaska, on 18 March. According to the official minutes published by the US Department of State, Blinken started the talks with his opening remarks, after which Sullivan greeted the Chinese delegation, and, then, Yang and Wang spoke. During the discussion, many accusations were thrown back and forth, and ripostes were sometimes even harsher than that the original attacks. 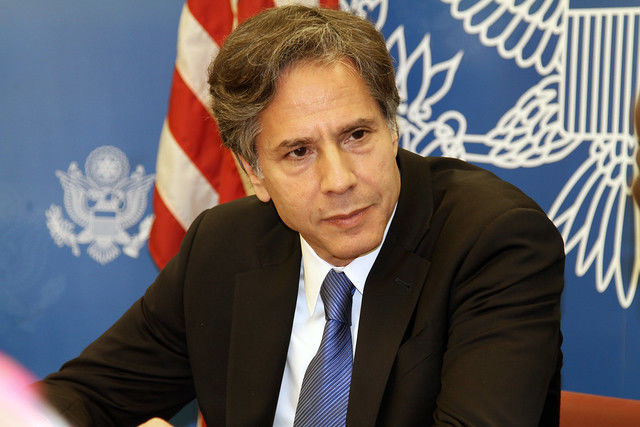 Blinken’s opening remarks explained the deep concerns about the state of human rights in Xinjiang, the democracy in Hong Kong, and the safety of Taiwan from the US’s perspective. Furthermore, he suggested issues like cyberattacks on the United States and Chinese economic coercion on traditional US allies as the main topics for discussion. He also highlighted the importance of upholding the rules-based international order, clearly implying that it was being threatened by China, since its actions had made the world a much more violent and unstable place. Blinken ended his remarks by saying that “the United States relationship with China [would] be competitive where it should be, collaborative where it [could] be, adversarial where it must be”, but he also voiced his hope that the two sides would be able to have a clearer vision of each other’s goals moving forward. Jake Sullivan re-emphasised the US standpoint on the main issues mentioned by Blinken, but he mostly gave reassurance to everyone else listening that the US was doing its best to help preserve the “free and open Indo-Pacific,” most likely purposefully not mentioning China as part of possible cooperation. 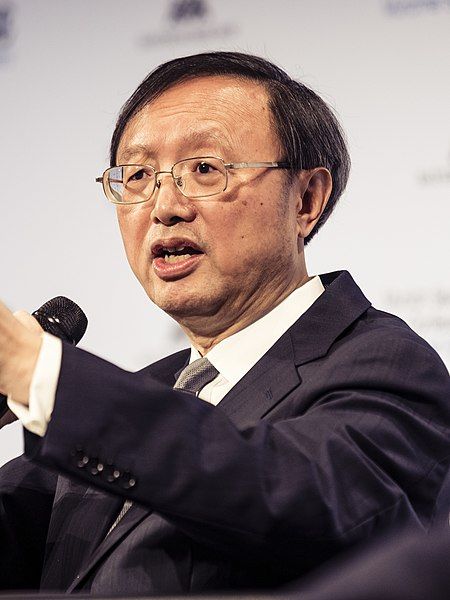 The Chinese response by Yang alone took more than twice as much time as the remarks by both US diplomats combined, and was considerably harsher on the main topics for discussion than the comments by his counterparts. According to him, China is one of the most important upholders of the UN-based international system, while the US and some other nations want to create their own “so-called ‘rules-based’ international order.” He argued that the universal values and rules advocated by the US were simply Washington’s conviction and should not be forced upon other nations. Further on, Yang criticised the state of the US democracy and called on Washington to “change its own image” and “stop advancing its own democracy in the rest of the world,” highlighting that many people had lost their confidence in the American democracy even in the United States. Then, he called the US out on its human rights campaign around the world while the country itself was still struggling with properly handling the Black Lives Matter movement domestically.

He also answered his colleague’s statement about US worries over Chinese cyberattacks by saying that the US should not blame someone else for that problem, as the country itself was “the champion in this regard.” Nevertheless, Yang called for cooperation on contribution to the peace, stability, and development of the world, mainly emphasising the necessity of cooperation on COVID-19, restoring economic activities, and responding to climate change. Following his speech, Wang made his remarks, and he almost immediately accused the US of interference in Chinese internal affairs, citing the sanctions on Hong Kong officials just a couple of days prior to the meeting, and claimed that it was “outright suppression.”

The talks continued, and Blinken told the Chinese delegation that he had spoken to nearly a hundred of his counterparts around the world and they had expressed “deep satisfaction” about the US engagement and “deep concern” about the Chinese actions, after which he also claimed that China was “grandstanding” for its domestic audience. After him, Sullivan emphasised his hopes that both sides would steer the following conversation with trust in each other to make future cooperation reality. In his response, Yang emphasised his dissatisfaction with the US officials’ condescending tone, saying that the US had not followed the necessary diplomatic protocols and that “there [was] no way to strangle China.” Finally, Wang added that if the US would speak for its allies or partners, then “it [would] be very difficult for international relations to develop properly.”

After these strongly worded arguments interspersed with some serious accusations, the talks continued without the presence of the press, and the two sides “‘immediately got down to business’ and held substantive, serious, and direct talks,” as a senior US official later told. All the hostility is not too surprising considering the past couple of years in bilateral relations between the two superpowers and that the they are now further apart than ever. As China is becoming more confident with every passing year, tensions between the country and the US will inevitably rise on many fronts, whether it is about economic, military, or technological competition for supremacy. What Beijing wants from the new US administration is to discontinue its so-called “anti-China” sentiment and practices, meaning the easing of the tariffs imposed during the trade war and the removing of limitations on Huawei and other Chinese firms and officials.

In the US, public opinion about China hit rock bottom, which was clear even during the election campaign when “tough-on-China” policies were among the most important topics. At the end of the Anchorage meeting, Blinken told the press that the US and Chinese representatives had “had intersecting interests on Iran, North Korea, Afghanistan, and climate change”, and came to the conclusion that some sort of cooperation might indeed be possible between the two states, at least in some areas. Beijing’s above-mentioned wishes might eventually fail to come true, since President Biden emphasised many times during his campaign that he would be even tougher on China than Trump, and such a policy could gain almost consensual support in Congress.

Consequently, it is not entirely clear today how fruitful the Alaska talks will be in the long term. Beginning a discussion was certainly a positive step towards engagement; it gave a platform for mitigating the tensions between the two nations at least. This could ultimately give cause for a certain amount of optimism: even if bilateral relations between the US and China do not become friendly, they will, at least, not be destructive by nature.

The opening pic is from Flickr, authored by the U.S. Department of State, and licenced under public domain.

About That Biden Ad on China

What China Policy It Suggests to the Biden Administration
Read more