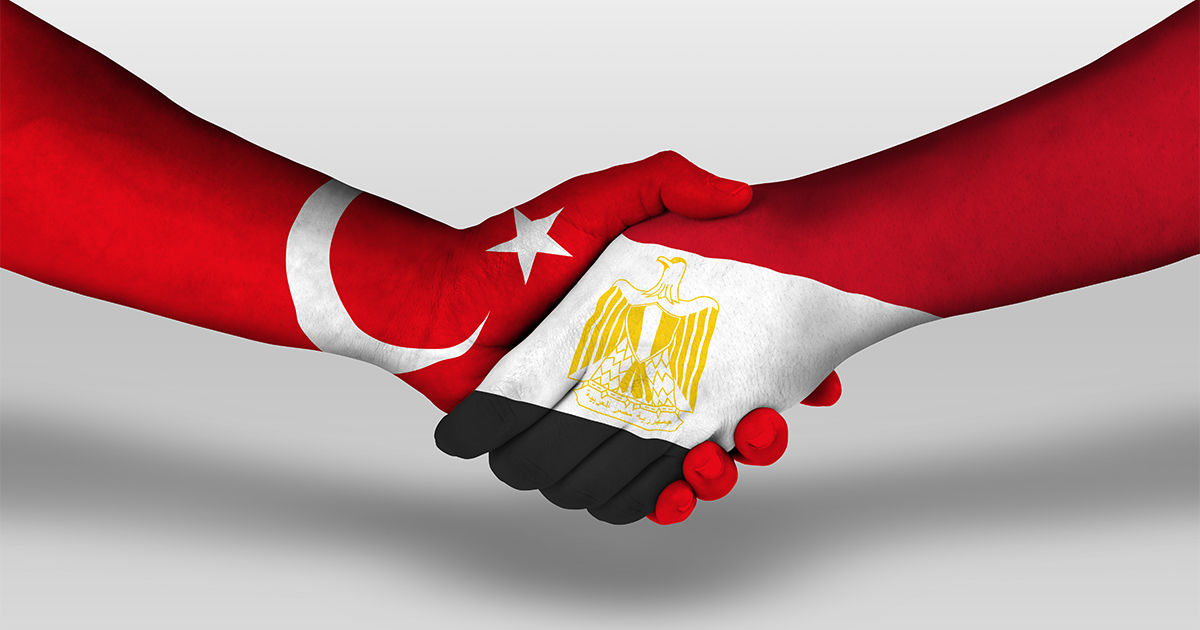 Burying the Hatchet but with the Handle Sticking Out

Questions around the Egyptian–Turkish Rapprochement

“As friends, we strive to restore our historical unity with the Egyptian people” – the words by Turkish president Recep Tayyip Erdoğan came as a big surprise in the country and the region alike, as there has been a hostile atmosphere between Egypt and Turkey since 2013. That might have not belonged to the most spectacular conflicts of the Middle East but have undoubtedly had a negative impact on the whole region. In 2021, there are more and more signs of a possible rapprochement. Are relations between Ankara and Cairo really “normalising,” or is this process doomed to fail from the beginning? Our latest piece will try to throw some light on these questions.

The so-called “Arab Spring” started a new chapter in the turbulent Egyptian–Turkish relations, which, in the past, was not free from devastating wars and great-power rivalries, either. The first democratic elections in the history of Egypt were won by the local candidate of the Muslim Brotherhood and one of the biggest admirers of the Turkish Justice and Development Party (Adalet ve Kalkınma Partis, AKP), Mohamed Morsi, who considered Erdoğan his “mentor,” called Ankara Cairo’s main ally in the region, and saw the Islamic democracy in Turkey as a model that the Egyptians should copy. In many cases, the two countries shared various goals and had joint interest in the MENA (the Middle East and North Africa). For example, Egypt—along with Turkey—began to support various Islamist organisations and militant groups across the region (especially in Libya and Syria), while the Egyptian leadership sought to oust the army from politics, just as the Turks had done in the first years of the 21st century. At the same time, the two country’s bilateral relations reached a historical peak: high-level meetings between them became regular, Turkey lent USD 2 billion to Egypt, there had been more than two hundred Turkish companies operating in Egypt by 2013, with more than USD 2 billion total investment, and bilateral trade between them jumped to USD 5 billion in two years.

Erdoğan’s popularity in Egypt during the first years of Morsi is well demonstrated by the fact that he was welcomed as a “hero” in the country after the “Arab Spring.”
Source: Al Jazeera English/YouTube

Therefore, it was not surprising that Turkey—along with Qatar—turned into a safe haven for the Muslim Brotherhood after Morsi had been overthrown by the Egyptian army under the leadership of Abdel Fattah al-Sisi and with the support of some political and religious groups. The Turkish media and leadership started to call the Egyptian president one of the bloodiest dictators in the world, and his regime the most horrific manifestation of “state terrorism.” Moreover, they gave Egyptian dissidents an opportunity to openly criticise the Sisi leadership in TV shows and the social media, too. Turkish diplomacy tried to achieve the introduction of UN sanctions against the new Egyptian government, but this attempt finally failed. In return, Egypt lobbied against Turkey a year later and prevented the country from becoming a non-permanent member of the UN Security Council. All previous military cooperation and joint drills were suspended, and the Turks vetoed any participation by Egypt in the alliance’s partnerships.

Thus, there was a ding-dong battle unfolding between the two countries. The Egyptian press regularly attacked Erdoğan, the AKP’s rule, Turkey’s intervention in Syria, and the country’s measures against minorities (for example, against Kurds). After both countries had decided to recall their ambassadors, diplomatic relations were downgraded to the level of charge d’affaires. They also cancelled the truck roll-on/roll-off (ro-ro) transportation between them. When the members of the Turkish army tried to seize power on 15 July 2016, the Egyptian military and political leadership did not condemn the coup at all, unlike most countries, and many among them —confidently or openly—supported the conspiring military officers.

Moreover, none of the two country’s leaders has since missed an opportunity to put the other one in an awkward diplomatic situation: at the Munich Security Conference in 2019, al-Sisi, for instance, suddenly recognised the Armenian Genocide, enraging the Turkish delegation. In the same year, Erdoğan has rejected an offer to join a dinner with President Donald Trump upon seeing the Egyptian president sitting at the table—he rather stormed out of the room theatrically.

When Morsi died in one of Egypt’s prisons in 2019, mosques across Turkey hold funeral prayers for him.
Source: TRT World/YouTube

However, the Egypt–Turkey strife did not end here: in recent years, the two have played a “game of thrones” in and outside MENA. In the last years of Sudanese dictator Omar al-Bashir, the Turkish influence became stronger in the North African country. Ankara also supported the Ethiopian Great Renaissance Dam project, and Turkey is now one of the three largest investors in Ethiopia—by 2021, it invested USD 2.5 billion in the country. Besides, if any other regional country (e.g., Algeria or Morocco) got involved in a debate with Egypt, Turkish diplomacy often lined up behind it.

On the other hand, Cairo has consistently sided with those countries whose territories or citizens have been attacked by the Turkish military. It happened so, for example, in Iraq or in the case of Syrian Kurds, as Egypt, breaking with his former disengaged attitude, became one of their regional supporters. In the meantime, Egypt developed close energy and military relations with those countries that also have dozens of serious conflicts with Turkey. One of the biggest achievements of Egyptian diplomacy was the establishment of the international body of the Eastern Mediterranean Gas Forum (EMFG) in January 2020. However, the most dangerous situation—involving the possibility of direct armed conflict between Egypt and Turkey—evolved in Libya: although Ankara and Cairo helped their allies in the Second Libyan Civil War, the Turkish drones and Syrian mercenaries became a “game changer” in the North African country at the beginning of 2020, and Egypt wanted to restore balance with an open military action. 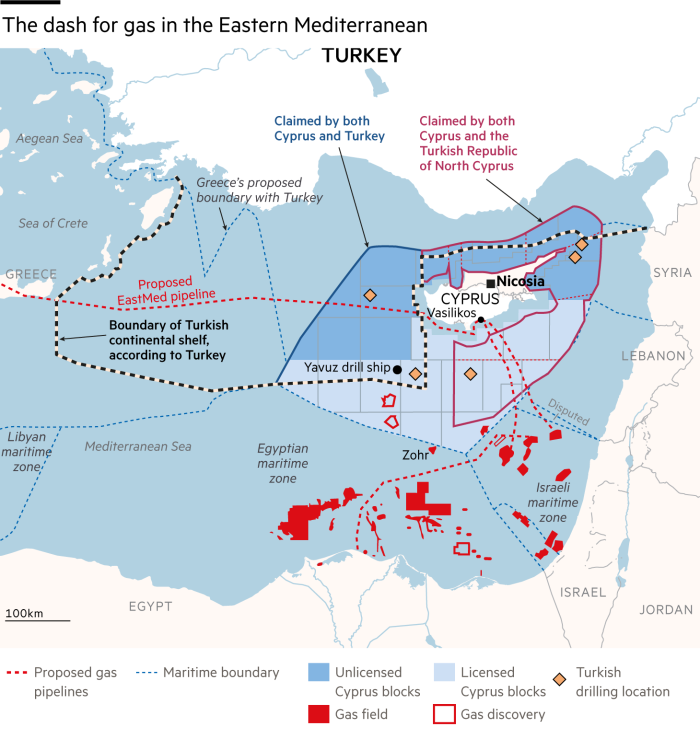 It is likely that the fear of an Egyptian–Turkish war forced the parties to reconsider their “proxy war” in the Mediterranean. Their decision was affirmed by events and processes such as the COVID-19 epidemic, figures of economic recession, the two countries’ recurrent conflicts with other countries/regions (in Egypt’s case, with Ethiopia and, in Turkey’s, with the Caucasus), or the outcome of the US presidential election in 2020.

The wind of change began to blow at the end of 2020, when Egyptian and Turkish intelligence officers and chieftains started to exchange messages—through intermediaries and in person alike. In March, Erdoğan said the two countries had had “intelligence, diplomatic and economic” contacts in the past and that he desired “strong ties” in the near future. The Turkish authorities asked Egyptian opposition television channels operating in their country and Muslim Brotherhood intellectuals to moderate their criticism of Egypt’s government and stop attacking al-Sisi. Also, Turkish diplomacy has lifted its veto against Egypt’s partnership activities with NATO. By 2021, more and more members of the Turkish government have taken a stand for beginning rapprochement and sending a diplomatic mission to Egypt.

Thus, expectations were high when Sedat Önals, Turkey’s deputy foreign minister, had an official trip to Egypt. During the two-day visit, which started on 5 May, no spectacular breakthrough was achieved. Still, analysts and experts are very optimistic because the parties have not only agreed to continue with normalisation but have also spoken about “sensitive” subjects such as the Mediterranean natural gas fields or the Muslim Brotherhood. Furthermore, Ankara invited the Egyptian foreign minister to Turkey and Erdoğan reiterated his belief in the forthcoming settlement during an interview on 2 June.

However, not everyone shares this optimism, as a possible Egyptian–Turkish rapprochement has its pitfalls—especially because of Egypt, as the Turkish leadership is the main initiator and engine of the whole reconciliation. Undoubtedly, it would provide a great benefit for Cairo to end the old strife when Egypt faces so many internal and external challenges. However, from the Arab country’s perspective, there is no need for a rush, so it can impose harsh conditions on Ankara. Al-Sisi knows that circumstances are forcing Erdoğan to adopt a new policy aimed at “making friends again” and to launch dozens of diplomatic campaigns across the Middle East, targeting not only Egypt but also the United Arab Emirates and Saudi Arabia. Thus, for the time being, the Egyptian government adopted a wait-and-see policy: Cairo closely follows what conditions Abu Dhabi and Riyadh set out and monitors Ankara’s reactions toward the Arab partners’ terms.

The other key question is whether regional events and the two countries’ different interests in the MENA can eventually rekindle hostility between them even if they could achieve breakthrough success in their bilateral relations. Although the Libyan ceasefire, conciliation, and the country’s upcoming elections are given the blessing of Ankara and Cairo alike, the competition for natural gas in the East Mediterranean remains a source of serious tensions. The EMGF is simply too important for the Egyptian leadership: the organisation respects its member states’ rights to resource extraction, declares a joint fight against “illegal drillings and mining” by other countries (especially Turkey), and strengthens energy cooperation (for instance, by building gas pipelines) among its members.

For those of our readers more interested in the topic, it might be worthwhile to watch our conference “The Eastern Mediterranean: Between Rivalry and Alliance Building”
Source: Antall József Tudásközpont/YouTube

Therefore, the Egyptian leadership will not accept any type of Turkish term which could weaken the Cypriot–Egyptian–Greek–Israeli “alliance” and/or indirectly support Ankara’s regional ambitions. Last but not least, al-Sisi will immediately take any Turkish demands that could lead to a change in Egypt’s maritime borders and natural gas production off the table, as these resources could provide a cure for the Arab country’s economy, which suffered heavily from the COVID-19 pandemic in 2020.

Even before this blog post was finalised, there was still plenty of question hanging over a possible Egyptian–Turkish rapprochement. There is no doubt that normalisation has started between Ankara and Cairo in recent weeks, but its outcome remains uncertain. Still, there are grounds for optimism that one of the main sources of tension in the Mediterranean may soon disappear.

The opening pic is by Prehistorik/Shutterstock

The Eastern Mediterranean: Between Rivalry and Alliance Building