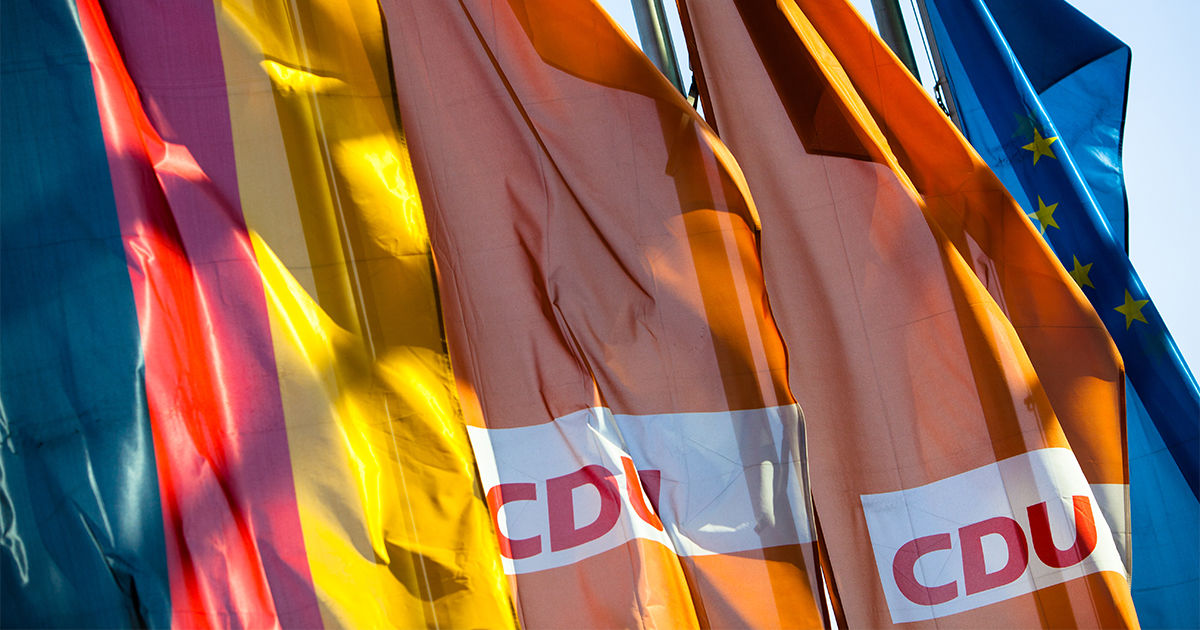 After Merkel’s eighteen-year leadership and Kramp Karrenbauer’s brief experience, Armin Laschet, the prime minister of North-Rhine-Westphalia, was elected as the ninth leader of the CDU on 16 January 2021, thus also having the chance to stand as the CDU/CSU’s candidate in the autumn federal elections.

After German Defence Minister Annegret Kramp-Karrenbauer resigned as Chairman of the Christian Democratic Union (Christlich Demokratische Union Deutschlands, CDU) on 10 February 2020, just less than two years after she had assumed the position, the race for the party leadership became fiercer. This January, nearly one year later than planned, as the elections suffered delays due to the outbreak of the coronavirus pandemic, the final decision about the next CDU leader was reached. The newly elected party leader will inherit Angela Merkel’s burdensome legacy, but, even apart from this fact, this year will be very challenging to him because he has many chances to be the CDU/CSU Union’s candidate for the chancellorship in the next federal election that will take place on 26 September.

After Merkel’s eighteen years and Kramp Karrenbauer’s brief experience, CDU members selected their new leader from three candidates. Usually, the contest for the CDU leadership is not as crowded as this year, since it is not common that three people run for the party chair at the same time. The three candidates, all of them male, were Friedrich Merz, the former leader of CDU/CSU’s parliamentary faction, Armin Laschet, prime minister of North-Rhine-Westphalia, and Norbert Röttgen, chairman of the Bundestag’s foreign affairs panel. They showed some similarities, as they all come from North-Rhine-Westphalia, are Catholic, married, and have a law degree. These facts notwithstanding, their differences become evident in their approach to politics. Merz represents the more conservative wing of the CDU, Röttgen, as former federal minister of the environment, is sympathising with the Greens, and Laschet, who eventually came first in the race, is a supporter of Merkel’s centrist politics. 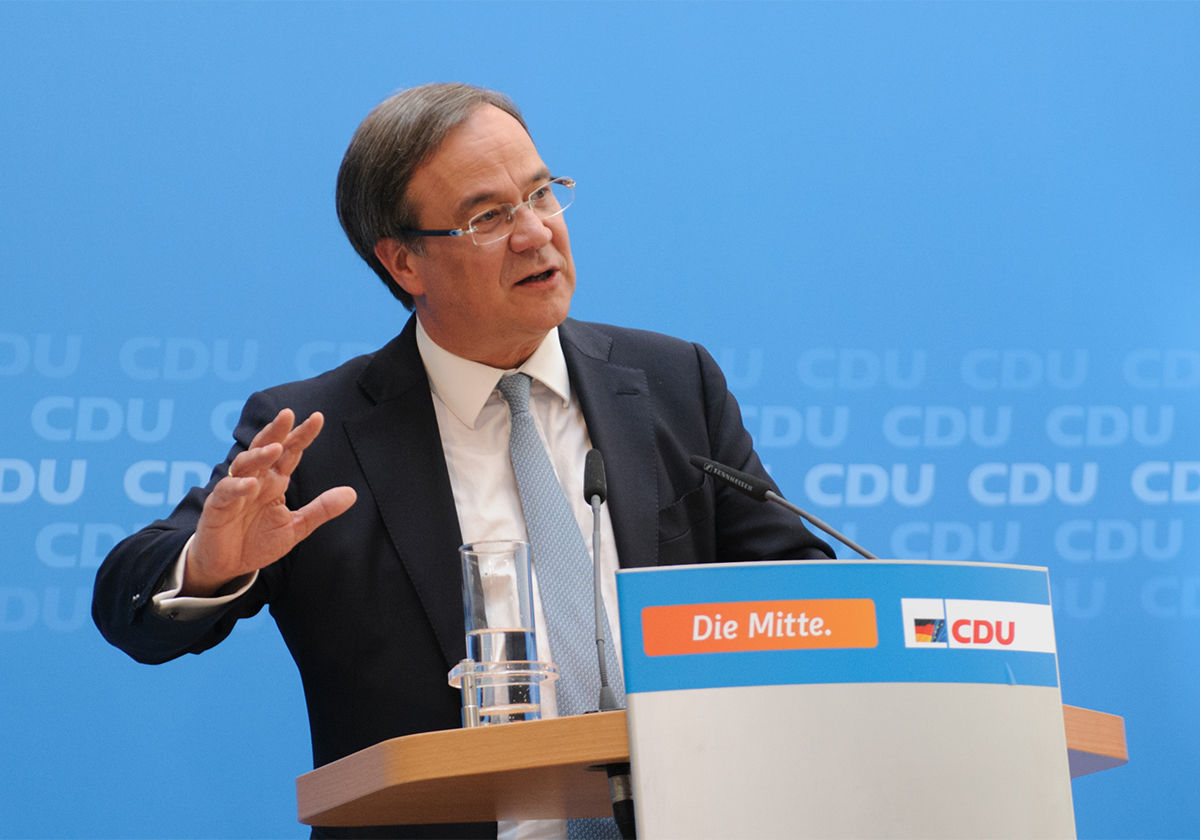 Armin Laschet on 15 May 2017 in the Konrad Adenauer House in Berlin
Source: photocosmos1/Shutterstock

As already mentioned, because of the restriction measures put in place to control the pandemic, the CDU leadership election, scheduled for April 2020, had to be postponed twice. Eventually, it was held on 16 January 2021, but, unconventionally, the voting session was held online, following the emergency regulation. In the first round of voting, Friedrich Merz had 385, Armin Laschet 380, and Norbert Röttgen 224 out of the 989 valid votes. Thus, Röttgen was eliminated from the race, and, in the second turn, delegates had to choose between Merz and Laschet. In the second round, most of those who supported Röttgen cast their vote for Laschet, who finally won 521 of the 991 digital votes and, therefore, was elected as the ninth leader of the CDU. Following the digital vote, the delegates confirmed their choice by postal voting on 22 January. By the mail-in ballots, Laschet was officially elected as Chairman of the CDU—he could even increase his lead, gaining 796 votes out of 980, which represents 83.35% of the total.

However, Laschet’s victory does not automatically mean that he will be the next candidate for chancellor, as this will be eventually decided together with the Bavarian Christian Social Union (Christlich-Soziale Union in Bayern, CSU) in April, and Markus Söder, leader of the CSU and prime minister of the state of Bayern, has also high chances to become the two party’s next candidate. Söder has not yet commented on his candidacy but congratulated Laschet after his election on Twitter and expressed his hopes that they would continue to write the CDU/CSU Union’s success story together in the future.

German Vice-Chancellor Olaf Scholz from the Social Democratic Party of Germany (Sozialdemokratische Partei Deutschlands, SPD) also congratulated on Laschet’s victory on his Twitter, underlining that his task would be very hard, considering his renowned predecessors. Scholz was referring to prominent figures such as Konrad Adenauer, Helmut Kohl, and, obviously, Angela Merkel, who led the Christian Democratic party before Laschet. Scholz also wished Laschet much success in leading the party during this extremely challenging year.

According to the Greens’ party leaders, Annalena Baerbock and Robert Habeck, Laschet will face major challenges: as Merkel’s successor, he needs to redefine the CDU and clarify what policies the party will decide to follow. However, they also added that Germany had an even more important task to do because it needed to cope with the economic and social consequences of the coronavirus pandemic and to carry out the ecological modernisation of the economy, which bears climate protection in mind.

The Free Democratic Party (Freie Demokratische Partei, FDP), pleased by Laschet election, expressed its hope for a black–yellow government and assured the new CDU chairman of its support. In fact, Laschet has never hidden his sympathies for the free democrats, and he will probably work to drag them into a governing coalition. According to Michael Theurer, FDP’s deputy faction leader, a CDU/CSU and FDP government under Laschet’s leadership would lead to an economy-friendly environment which would be suited for the hard-working German middle class and the country as a whole. Theurer, therefore, hopes that Laschet will emerge victorious from the contest with Söder, thus preventing that a more divisive figure become the next chancellor candidate. According to the FDP’s representative, the prime minister of Bayern could even open up a rift inside the CDU/CSU Union.

However, contrary to Theurer’s hopes, recent polls show that a conservative–green government would be the most likely outcome following the 2021 federal election. However, electing Laschet as party chairman does not necessarily suggest this cooperation: he believes it is an exaggeration that many take as given that a conservative–green alliance will govern Germany in the next four years, as he thinks the CDU/CSU’s cooperation with the FDP would represent a more workable alliance. Nevertheless, even the possibility of a so-called Jamaika-Koalition between the CDU/CSU, the Greens, and the FDP should not be ruled out. If there will not be a clear majority after the election, the CDU/CSU would probably be open to reconsidering this option. However, this will only be the case if the CDU/CSU would choose the CDU chairman Armin Laschet over Bavarian minister president Markus Söder as its candidate, given the former’s more open approach toward issues like environment and immigration, which represent sensible topics for the Greens. Before becoming North-Rhine-Westphalian prime minister, Laschet held the post of integration minister in his state, proposing a more liberal approach towards the problem of migration and considering as a fact that Germany is today an immigration country. 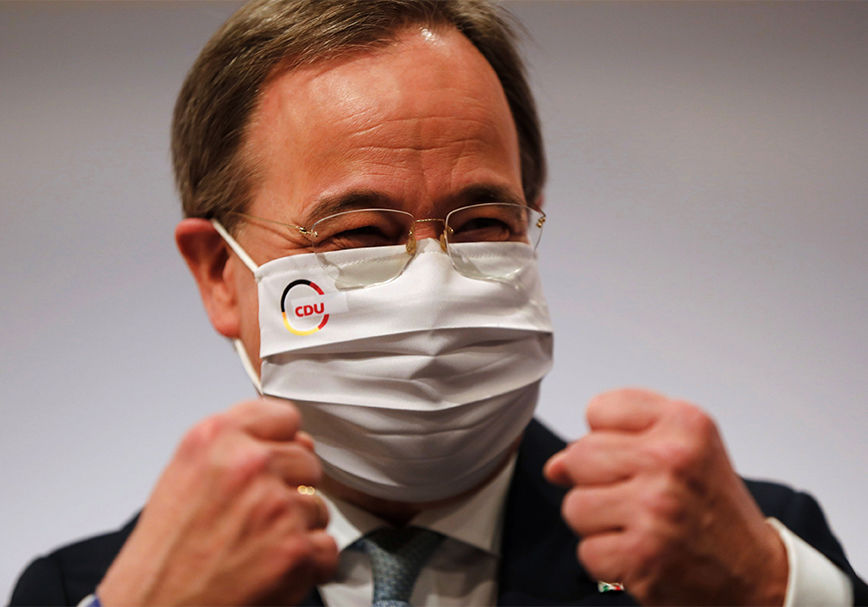 Yet, not all of Germany’s main parties welcomed the CDU members’ choice. On the Right, Jörg Meuthen, co-leader of the extremist Alternative for Germany (Alternative für Deutschland, AfD) said on Twitter that the election of Laschet was bad news for Germany because it meant that federal politics was further “merkelling,” whereas, on the Left, Bernd Riexinger, co-leader of Die Linke, affirmed that the new CDU’s chairman would once again try to save a conservative model that could not give answers to many issues. According to Riexinger, the CDU lacks future visions and it is stuck on “yesterday’s policies.”

From a foreign policy perspective, no significant changes are expected after the election of the new CDU chairman. Of the three candidates, Laschet is the most likely to follow Merkel’s foreign strategy, and, presumably, he will also continue this tradition in the future as party chairman, bearing in mind Germany’s international and, especially, European interests and relations. Consequently, relations between the Federal Republic of Germany and Hungary are not likely to change much, either, since, as party chairman, Laschet will undoubtedly take a leaf out of Merkel’s book.

The next eight months will, therefore, be eventful in Europe’s leading economy because, after sixteen years of Merkel’s leadership and following the pandemic, German citizens will be called not only to cast a vote for a party but also to decide on maintaining the country’s leadership or starting a new course. Germany’s vaccination strategy will also have a crucial influence on the final result of the election. A successfully planned vaccination will surely have a positive impact on the economy and garner more support for the party of the chancellor. It is also worthwhile remembering that Germany will be the first of the big European countries to hold a general election since the pandemic started, so the result might as well influence the course of politics in other countries and Europe as a whole.

The opening pic is by christianthiel.net/Shutterstock.