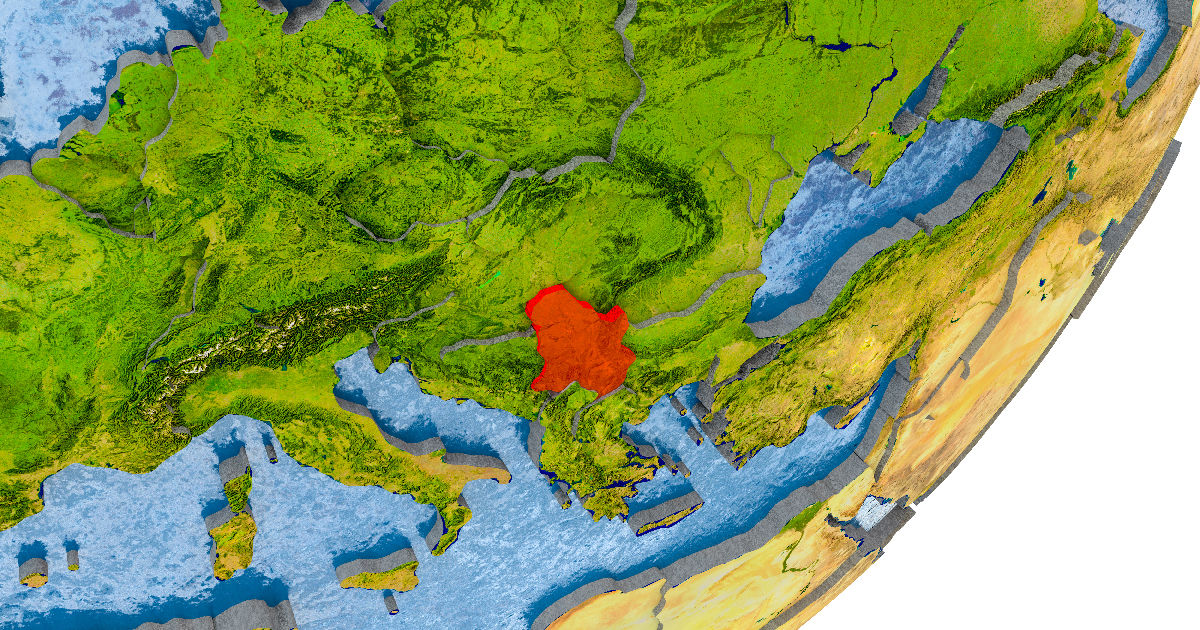 Although Serbian President Aleksandar Vučić portrays himself as a pro-Western politician, he has been able to maintain a delicate balance between Russia and the EU in recent years and keep his distance from Brussels and Moscow if necessary. What do the opposing sides have to offer for the country, and what can be the outcome of this scramble for one of the key countries of the Balkans?

After the shocking decision of French President Macron on the future enlargement in the Western Balkans, Serbian Prime Minister Ana Brnabić signed a trade pact with Russia, the power that actually dominates the Eurasian Economic Union, in hope of creating room for economic relations with other external actors in the Western Balkans, especially with Russia. In turn, the EU warned that Brussels would closely monitor those relations, since Serbia is one of the likely candidates to join the European Union. 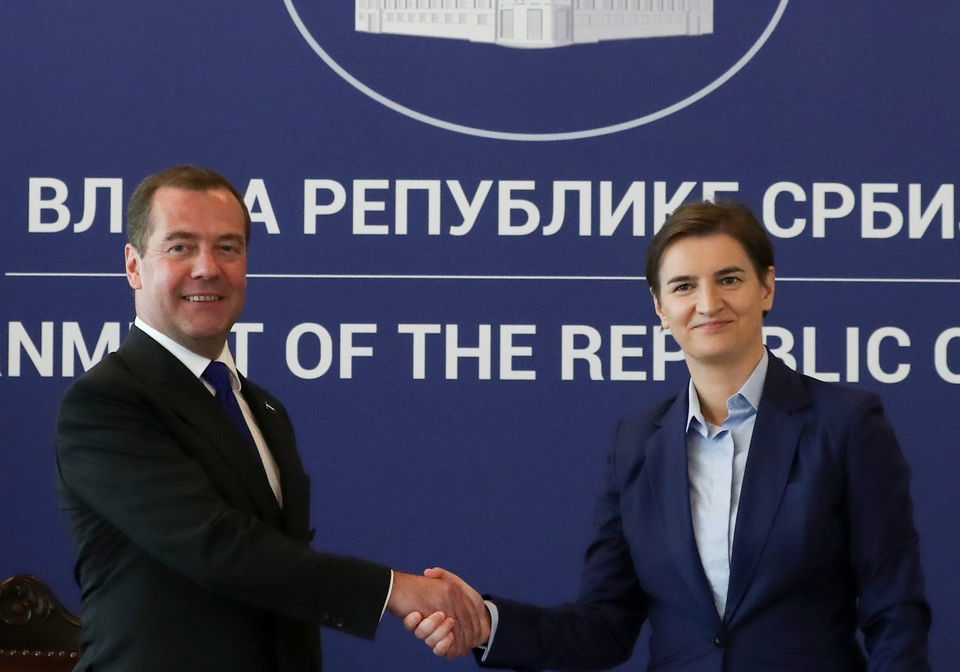 As a Western Balkan country, Serbia carries geostrategic significance for the security of South-eastern Europe, which creates an incentive to admit it into the EU. Other international organisations, such as NATO, also include Serbia on their security agenda to contain Russia. In the meantime, Russia, as a regional power, pursues an adversarial foreign policy in its neighbourhood, aiming specifically at countries that are actively engaged in a dialogue with the EU.

The current Serbian foreign policy of balancing is structured vis-à-vis the European Union on the one hand, while it maintains strong ties to its historical ally, Russia, on the other. Especially after the Russian intervention in Ukraine, and then in Syria, both of which have served as a proof that the world is not anymore unipolar and entered a multipolar phase centred around Atlanticism and Eurasianism, Russia wants to play an active role in the Western Balkans and particularly in Serbia, its natural ally, and compensate for its inactive past in which the NATO intervention in Serbia and the Kosovar secession could not be prevented. In the interim, Serbia tries to follow an assertive balancing foreign policy between the West and Russia and purse EU membership without harming its relations with Russia.

Russian interest in the Western Balkans and in Serbia can be characterised by the following three dimensions:

First, when the government of Kosovo declared the transformation of Kosovo Security Forces into a fully fledged army on 14 December 2018, Serbian President Aleksandar Vučić called for a UN Security Council meeting to discuss the issue and asked the UN to take on a major role in Serbia–Kosovo relations. Serbia felt encouraged to make use of Russia’s support in the UN Security Council and tap into its discursive power. Russia’s political influence on the UN Security Council created a chance to veto the decisions which aimed at the Western Balkans and reinforced the perception that Russia is back in the region. 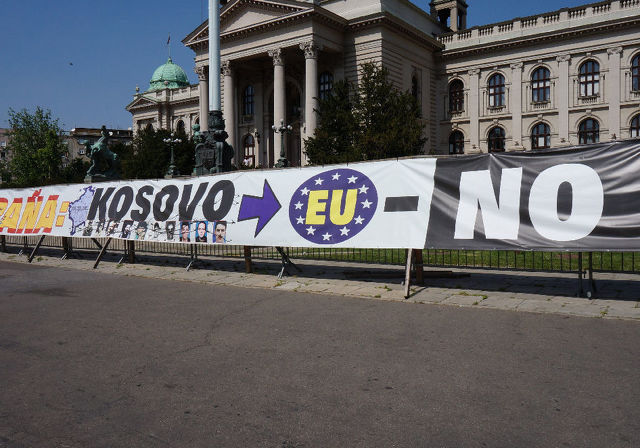 Posters in support of the Spanish attitude towards Kosovo and against the extermination of Serbs in Kosovo in front of National Assembly of the Republic of Serbia in 2018
Source: Iryna_Gabinet/Shutterstock.com

Second, the TurkStream Gas project, which was officially launched in the joint presence of the President of Turkey, Russia, Serbia, and Bulgaria on 8 January 2020, connects Serbia to the TurkStream pipeline through an extension. The Serbian expectation of a strategic partnership with Russia is extremely important because Serbia used to buy gas only from Ukraine and Hungary, but, by joining the new initiative, Belgrade can also buy it from Bulgaria through the Turkish pipeline. The geostrategic position of Serbia helps to strengthen its energy security significantly in not only the Balkans but also Europe. From another point of view, the creation of the new gas route across Serbia enhances Serbian industrial growth economically. Thus, its involvement in this gas project can make it possible for Serbia to fulfil the economical conditions needed for its accession to the EU. 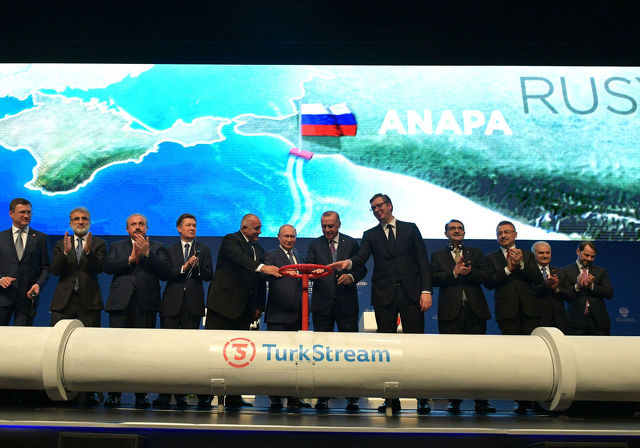 Third, the ideational dimension of Russian foreign policy manifests itself through the Slavic and Orthodox roots in Serbia. When North Macedonia took up its current name, it got closer to join NATO. Montenegro had already become a member of the organisation in 2017. These two countries, Serbia and Bosnia, the latter of which also includes the Republika Srpska, are crucial partners for Russia in the Balkan peninsula. The ideational power of Russia is conspicuous in Serbian foreign policy.

On the other hand, ongoing negotiations between Belgrade and Pristina, mediated by the EU, are crucial for future Serbian foreign policy. There have been promising developments in recent years to solve the Kosovo issue. Therefore, Brussels announced that 2025 could be the earliest year of Serbia’s prospective admission to the EU if the county and its neighbours find a solution to the Kosovo issue by then.

Today, a significant part of the Serbian community puts relations between Belgrade and Moscow in a more spiritual category. For example, answers to the question “[How do you a]ssess the influence of [different] actors on Serbian Foreign policy?” suggest that Russia is at the top, as it is indicated in a report by the Belgrade Centre for Security Policy. Aware of this, some in the EU suggest that even a border change might be acceptable in Europe in order to attract Serbia to its side. Regarding the reception of the EU, most Serbians believe joining the EU would be good from a personal and economic point of view, and also for providing freedom of travel across Europe, as it was also revealed by the above report. More citizens are in favour of than against the EU membership; still, if the recognition of Kosovo were a requirement, the majority would give up on EU accession. 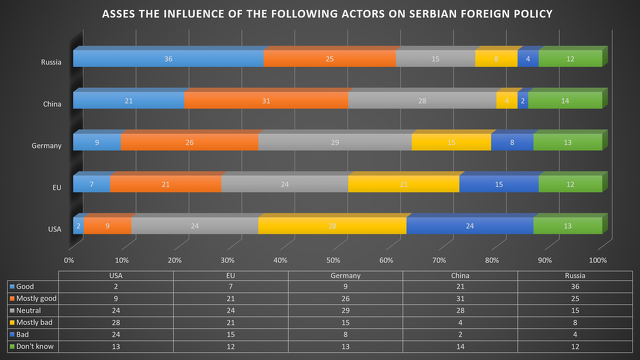 How do Serbians see the influence of foreign actors in their country?
Source of data: Belgrade Centre for Security Policy

However, Serbian pro-EU President Alexander Vučić seems to be undecided between the two sides. If he recognises Kosovo without the approval of Russia in order to join the EU, the Kremlin could easily put an end to his political life. It is enough for Russia to argue that it is the only ally of “real Serbian people,” and not the corrupt politicians; moreover, it will also continue to defend its territorial integrity.

In addition, there are some arguments that show relations between Russia and Serbia are not as good as they seem from the outside. For example, Serbia’s trade relations with the EU and Russia are hard to compare. The EU’s share in Serbia’s total trade is 64%, while that of Russia is only 6.9%. Serbia conducts nearly three military exercises with Russia each year but ten times more with NATO.

Although Vučić portrays himself as a pro-Western politician, he has been able to maintain a delicate balance between Russia and the EU in recent years and keep his distance from Brussels and Moscow if necessary. While the EU and Russia both want to pull Serbia to their side, Serbia is currently in a position where it can take advantage of this competition and gain a lot from both parties. Its relations with Russia as an alternative to the EU membership has been cautiously managed, and the EU has always been its expressed priority.