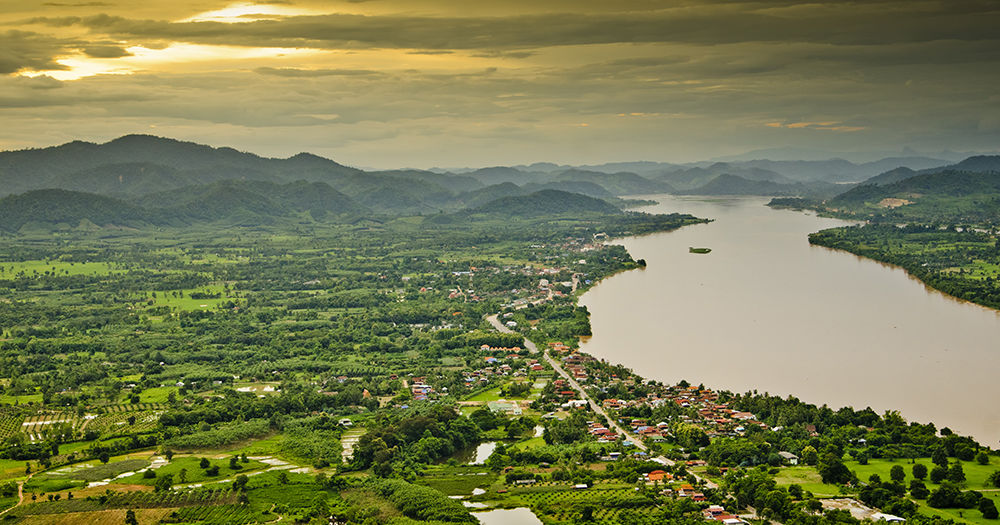 Does it link or divide?

The Tibetan Plateau is the source of the whimsical and unpredictable Mekong River, which crosses the Indochinese Peninsula and flows into the South China Sea in Southern Vietnam. Although it is one of the world’s longest and largest rivers, it is rather difficult to navigate because of its steep waterfalls, rapids and huge reefs. Even so, it plays a vital role in the lives of people in the Greater Mekong Subregion. In recent years, however, concerns about the deterioration of the ecological condition of the “turbulent green river” is getting more and more into the focus of attention and raising awareness to a number of short- and long-term problems that are already affecting the daily lives of the local people. China, home of the Upper Mekong Basin, bears a great responsibility for the degradation of the river, and so it is no coincidence that the issue is increasingly becoming a bone of contention in its relations with the affected countries of South East Asia. This article focuses on why the ecosystem of the Mekong River is vital to the countries of the region; how the river has become a diplomatic tool; and what efforts the parties are making to resolve the deteriorating environmental problems and normalise the worsening diplomatic relations.

With an estimated length of about 4,900 kilometres, the Mekong River is the longest river in South East Asia and stretches the South China Sea from South East China through Myanmar, Thailand, Laos, Cambodia, and Vietnam. The river rises as the Za Qu in Tibet and is known as the Lancang to the Chinese. This fast-flowing part of the Mekong River, which runs through China, is bordered by steep banks and crosses Qinghai Province, the Tibet Autonomous Region, and Yunnan Province, accounting for about half of the river’s total length. Leaving China, the Mekong flows first along the Myanmar—Lao and then the Thai—Lao border. Between these two sections, the Mekong meets its right tributary, the Ruak River, which separates the upper and lower river basins. The Upper Mekong Basin and the Lower Mekong Basin connect a total of seven geographical units: the Tibetan Plateau, the Three Rivers Area, and the Lancang Basin belong to the upper reaches of the Mekong Basin, while the Northern Highlands, the Khorat Plateau, the Tonle Sap Basin, and the Mekong Delta are units of the lower reaches. 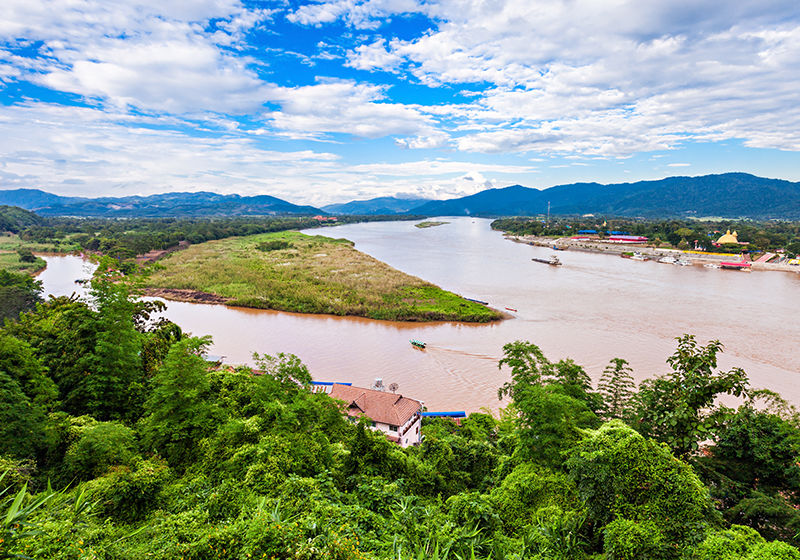 The area at the confluence of Myanmar, Laos, and Thailand is called the Golden Triangle. In addition to its geographical importance, the area of about 950,000 square kilometres has become notorious for drug trafficking. Since the 1950s, opium and its various derivatives, as well as methamphetamine, have been produced in and smuggled from the region in one of the largest quantities in the world.
Source: saiko3p/Shutterstock

In the Lower Mekong Basin, the riverbed gradually widens, water flow velocity slows, and the landscape is dominated by an extensive network of tributaries. Typically, the right-bank tributaries of the Mekong come from areas with lower rainfall and are, therefore, responsible for lower water discharge. In comparison, the left-bank tributaries provide a higher rainfall distribution by coming from much wetter areas and thereby playing an important role in feeding the river during the monsoon season that lasts from June to November at the Lower Mekong Basin. The main natural and geographical factors shaping the hydrological characteristics of the river include the climate and relief of the Greater Mekong and the land and soil management of its different regions. Each characteristic varies greatly among the involved areas: the climate of the entire Mekong Basin ranges from continental to tropical monsoon, the topographic conditions are also highly variable, and soil erosion is inhibited in some places by cultivated land and enhanced in others by deforestation.

That the Mekong is regarded as a river of extremes is chiefly due to its extremely heterogeneous characteristics. Nothing makes this more evident than its highly volatile flow regime. Although the river, which is crisscrossed by gorges and waterfalls, has long been the focus of interest as a possible energy source, the construction of the first hydropower plant had to wait until the early 1990s, when a dam was built on the Chinese section of the river. From then on, fears persisted among residents of the Lower Mekong Basin that China could “turn off the tap” to the lower reaches of the river at any time. All of this has become especially threatening in the context of the increasing energy needs of the quickly growing populations and economies along the Mekong. Cheap hydropower has, therefore, become one of the basic prerequisites for the stability of the region. As a solution, more dams were built by both China and the countries of the Greater Mekong Subregion in the coming decades, but this has further exacerbated both the environmental problems and the diplomatic conflicts between the countries involved. 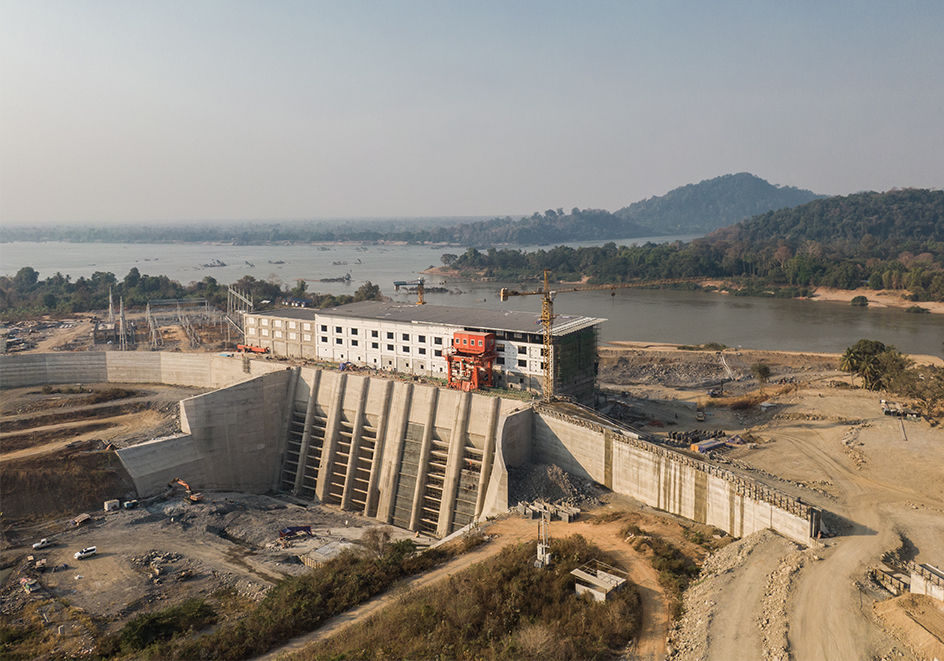 The Don Sahong Dam in Laos, which has been commissioned in 2020, is just one of many hydropower plants built along the entire length of the Mekong. Eleven dams are in operation on the Chinese section of the river alone.
Source: Manos Fikaris/Shutterstock

According to the Food and Agriculture Organization of the United Nations (FAO) report titled “The State of World Fisheries and Aquaculture 2020,” the Mekong River, rich in freshwater biodiversity and in fish in particular, is accounting for more than fifteen per cent of the world’s inland fisheries catch. The river is home to around 1,300 species of fish and is the main source of food for the surrounding countries. It is no coincidence then that several countries in the region are leaders in freshwater fisheries. From this perspective, it is interesting to note that the FAO report also highlights contrasting trends in fishery production, when stating that between 2007 and 2016 global inland fisheries have gradually declined in some countries, including Thailand and Vietnam in the Greater Mekong Subregion, while other countries like China and Cambodia, for example, have increased their total catches over the same period. To be sure, fish stocks are not only used to meet the immediate needs of local people, but are also an important source of income as the economies of the Mekong Basin are heavily dependent on earnings from the export of fisheries products. For them, China, with its ever-expanding market demand, is one of the most important destinations for these commodities. In particular, Vietnam and Thailand, which are struggling with declining catches, are the two leading fisheries exporters in the region. Parallel to the growing demand, the risk of overfishing is becoming a constant concern and a pressing problem for the region’s ecosystem.

For the countries of the Greater Mekong Subregion, sufficient quantity and quality of water is not only vital as a direct source of food but it also contributes indirectly to the food supply of the countries of the region through agricultural irrigation. Moreover, the river is also an essential component of the Greater Mekong Subregion’s ecosystem, as it sustains the region’s flora and provides habitat and food for its wildlife. All of this requires adequate water quality, but waste and plastics in particular heavily pollute the Mekong River. Additional economic and supply problems arise from the sometimes extremely low water levels, which affect the length of shipping and transport routes as well as hinder port traffic. 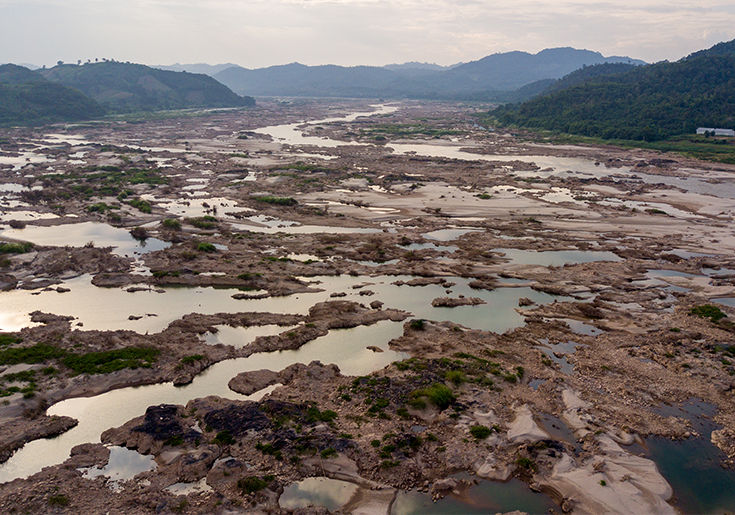 This picture, taken in Thailand, represents well one of the most obvious problems with irresponsible water management, which poses a threat to the survival of many species of animals and plants.
Source: Sutipond Somnam/Shutterstock

Currently, a total of twelve cooperation mechanisms can be associated with the Greater Mekong Subregion, mainly addressing the prevention of ecological disasters. The regional and global importance of the area is reflected in the fact that cooperation is not only concerns the directly affected countries but external actors such as Switzerland or the United States are also involved in the dialogue. The latter entered into a multilateral cooperation with the countries of the Lower Mekong Basin only last year in order to curb the further expansion of great power rivalry on the river. In addition, both India and Japan have a clear interest in preventing Chinese hydro-hegemony, which is also an important factor for the countries of the Greater Mekong Subregion.

One of the most important and longest-standing regional intergovernmental organisations on this issue is the Mekong River Commission (MRC), which works with the governments of Cambodia, Laos, Thailand, and Vietnam to properly manage and preserving the river and its associated resources. Although the MRC views China as a dialogue partner, stating that the collaboration could lead to forward-looking outcomes, the 2021 report by ISEAS-Yusof Ishak Institute shows that opinion leaders in South East Asian countries tend to view the cooperation on the Mekong River rather negatively. The survey also shows that the assessment of the issue is controversial even within South East Asia, as riparian countries hardly perceive its weight. Thus, despite its vital role, the Mekong poses a number of difficulties for mainland countries of South East Asia. While on the one hand, it represents an additional platform to the existing ones in the Sino—South East Asian confrontation, on the other hand, it shakes the unity of the region.

A Window to the World
Read more
Zsófia Gulyás