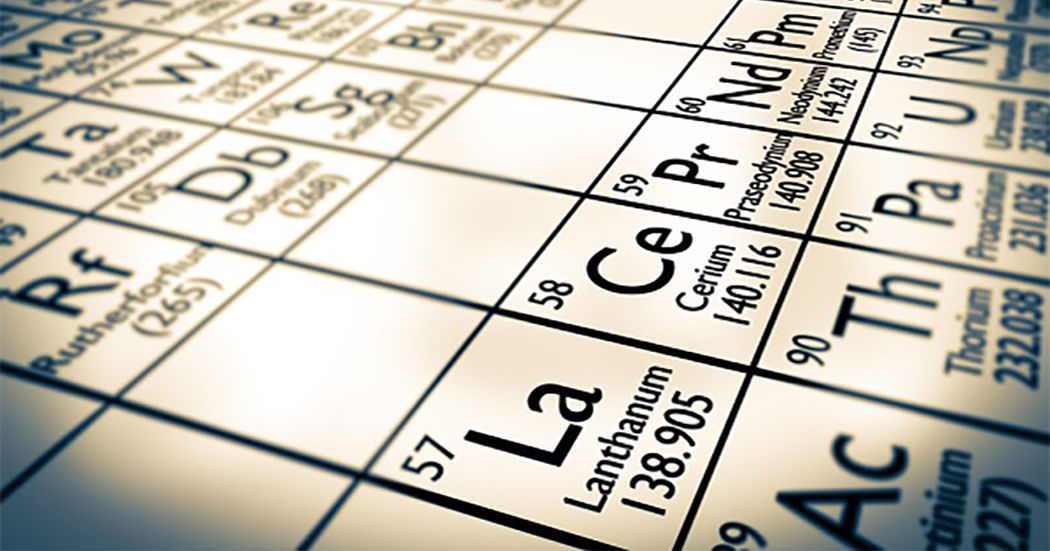 Elements of the whole puzzle

In general, fossil fuels are in the focus of attention as the most demanded raw materials, even though non-energy raw materials, such as rare earth materials, also have a key implication on the raw material supply chessboard. In our new miniseries, we will introduce the most important problems related to these lesser-known but all the more important chemical elements to you. The topic will be further discussed at our yearly international sustainable development conference “SUSCO BUDAPEST 2019 – Resource Competition: ON” focusing on the sustainable use of the natural resources which are becoming the driving force behind global development. 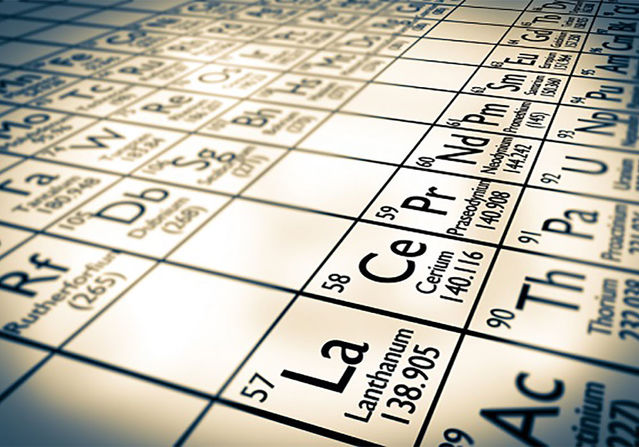 It is hard to go a day without using rare earth elements (REEs). Let’s just think about smartphones, televisions, or computers. Compared to how difficult it is to produce rare earths, it is surprisingly easy to find them: contrary to what their name indicates, their occurrence is not that uncommon—although economically mineable deposits can be quite rare. Some of them are essential for today’s manufacturing technology: with the advancement of science, the improvement of information technology, transport, household tools, and robotics, the use of different materials and elements became indispensable. The first thing which usually might come to one’s mind is that we need a bunch of plastic, some aluminium and silicon for the chips, copper for the wires, and we are ready. Of course, reality is much more complicated. There is hardly any element in the periodic system that would not be used to produce our everyday high-tech equipment and our pocket-sized gadgets. The strongest demand for rare earths is in the permanent magnet sector, as they are essential components of cell phones, flat-screen televisions, computer chips, automobiles, wind turbines, nuclear power, aircraft, to name a few. Their widespread use in high-technology products and also in low-carbon technologies is also due to their exceptional luminescent, catalytic, and electrochemical properties. 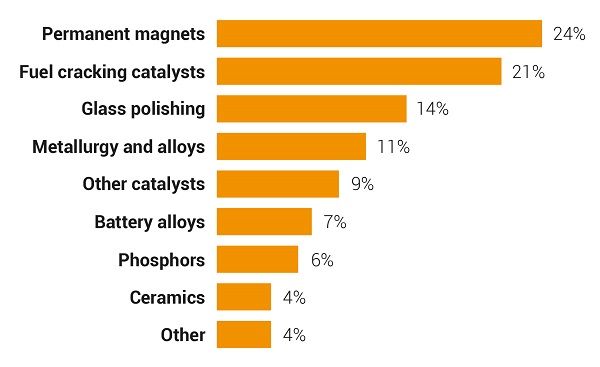 It is very interesting to realise that there are so many components in the devices around us; however, this astonishment turns serious when it becomes clear that rare earths are practically mined only in China. More than 80% of world production comes from there, and the country is less and less willing to serve the global industry’s needs but would rather keep the majority of the supplies to itself. Disruptions to supply and increase in costs of imports is constantly fuelling uncertainty around the topic. Rare earth elements are generally subdivided into light (LREE) and heavy elements (HREE). Among the 17 rare earth elements, light REEs include lanthanum, cerium, praseodymium, neodymium, promethium, samarium, europium, gadolinium and scandium: they are considered to be produced in global abundance and are in surplus supply. Heavy REEs, such as terbium, dysprosium, holmium, erbium, thulium, ytterbium, lutetium and yttrium, are produced mainly in China and are in limited supply. 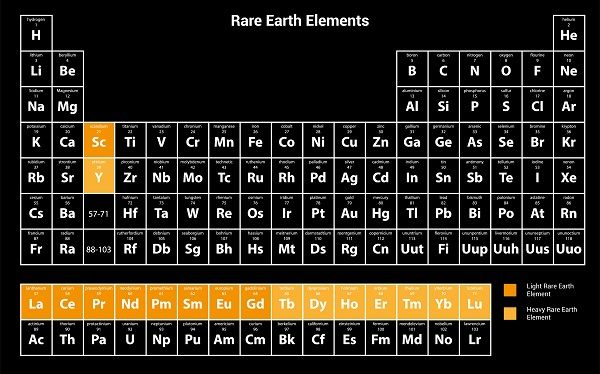 Unlike most of the well-known elements (copper, silver, gold), rare earths do not clump together in single-element lumps. They have a similar chemical composition (15 of the 17 rare earth elements occupy consecutive places on the periodic table), and due to this, they bond easily with one another in minerals. Turning these minerals into useful material is costly and complicated: to get rare earths from the ore that contains them, the material has to be dissolved in solutions of acids over and over again, then it has to be filtered and dissolved again. “The goal is not so much to remove rare earths from the mix as to remove everything else,” writes David S. Abraham, author of the book The Elements of Power.

In general, western countries have not viewed REEs as strategic commodities. The term “strategic” used for a primary commodity usually reflects a nation’s perception of exposure and vulnerability to supply disruptions. If the needed raw material does not have many or economically feasible substitutes, and it primarily comes from foreign countries, a disrupted supply chain needs to be rethought and revised rapidly to protect the exposed nation’s industries from the consequences of a loss of supplies. For example, the production of semiconductors (of which RREs are integral components as well) is one of the most important drivers of economic growth in the electronics value chain. Since the beginning of the 2000s, nearly 10% of global GDP has been generated by producing and trading electrical systems related to semiconductors in some form. So now, electronics manufacturers, electric automakers, clean energy technology industry leaders might have growing concerns, not even mentioning leaders of the military–industrial complexes: as said, China mines about 80% of the 17 elements that appear on the periodic table and are essential for the most modern weapon systems. Plus, the country is the leading global producer of around 40 mineral raw materials, at either the mining or the processing stage.

Countries of the European Union also need to relaunch the assessment, exploration, and evaluation of strategic mineral resource stocks within the continent. It had been claimed in expert reports for years, but the concept of a circular economy model only became widely known when the European Union’s Circular Economy Package was adopted in December 2015. The issue of critical raw materials is one of the five priority areas of the Circular Economy Package. (The main idea of the circular economy model is an economy which is regenerative by design, and where products and services are traded in closed loops with the aim to retain as much value as possible).

However, mining is one of the most highly polluting of all human activities, and stocks often coexist with radioactive elements, e.g., uranium and thorium, which require separate treatments and procedures. As mentioned, a rare earth ore goes through separation procedures a dozen times. The whole process is expensive, complex, and dangerous, and in the end, it produces a number of awful chemical byproducts, making rare earth mining and refining, indisputably, one of the most dangerous and most damaging environmental activities in the world. The Chinese mines alone are estimated to produce ca. ten million tonnes of acidic radioactive waste yearly. The area of the “rare earth’s capital,” Baotou, a larger resource hinterland of China, converted into a lunar landscape in a few years: the vegetation disappeared and the population of the neighbouring villages was displaced after inhabitants began to lose their hair massively due to the toxic substances leaking into the drinking water of the area. 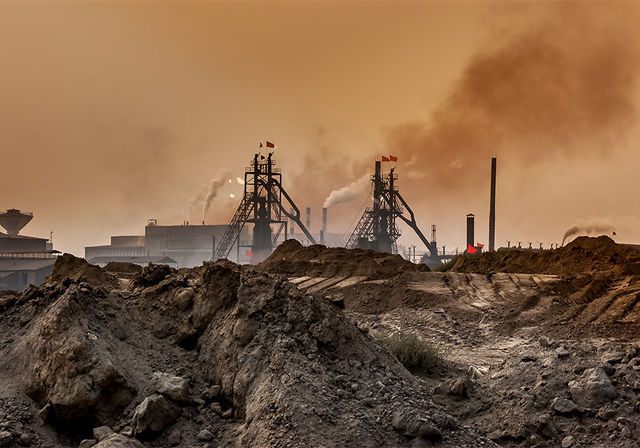 Until the 1980s, the US had an actual dominance in the rare earth supply, providing the world with these elements, all extracted in Mountain Pass, California. With China’s appearing on the market, Mountain Pass was not able to keep up with the depressed prices and closed its doors at the beginning of the 2000s. However, there are many other reasons for keeping production overseas—unfortunately, they are all the “usual ones”: cheap labour costs and the Chinese willingness to overlook environmental damage. Yet it is also a fact that rare earth production in China is often combined with other mining operations, and rare earths appear as byproducts of more lucrative extraction processes. So in most cases, Chinese producers have the advantage of escaping the swings of the market as they are not reliant on a single product. However, Mountain Pass restarted in January 2018, and, under the current plans and according to the official version, the aim is to process rare earths for domestic use in the clean energy sector.

But for all that, the increasing Chinese monopoly in the worldwide supply chain might have important implications for the manipulation of the global trade chessboard.