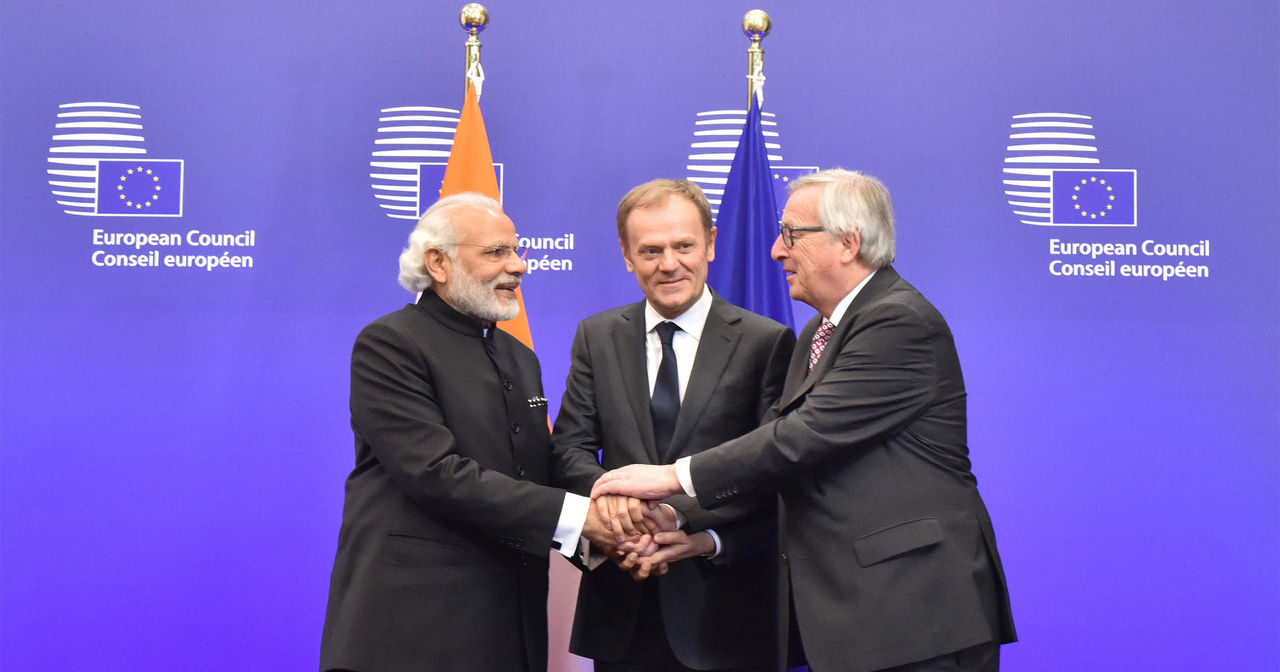 India's bilateral trade relations in light of the Brexit

The EU–Indian trade relations have several decades of history, but negotiations on a Free Trade Agreement seem to drag on forever. But what are the perspectives nowadays, with India becoming one of the leading economies of the world and the EU trying to deal with its inner disputes and the Brexit?

The Hindu rate of growth is a thing of the past and since the Indian economy’s 1991 liberalisation, the country’s integration into the world trade and economic growth seems unstoppable. The Indian economy is the world’s fastest growing economy that appears to be overtaking China with its annual growth rate of 7.4%. Yet this rapid growth is in a great part due to the demographic characteristics of the country. India’s population of over 1.3 billion is two and a half times bigger than that of the European Union. While the ageing of the population is an increasingly important issue in Europe, the average Indian age is 28 years. Resulting from the demographic explosion, the country is abundantly equipped with a young workforce. According to data from the International Monetary Fund, India is the world’s sixth largest economy. However, taking into account the population, India’s GDP per capita is still only a quarter of China’s—a country with roughly similar demographic indicators.

The beginning of India’s cooperation with Europe as a united economic entity dates back to the times of the European Economic Community in the 1960s. The cooperation agreement signed in 1994 went beyond the purely economic co-operation and also created the necessary conditions for political dialogue. Nowadays, although only 3% of the EU’s external trade consists of exchanges with India, the European Union is India’s largest trading partner: one-fifth of the country’s foreign trade takes place with EU countries. The most important elements of the exchange are semi-precious stones and products of the chemical, automotive, aerospace, and steel industry.

Negotiations of a free trade agreement between the European Union and India started in 2007, but the initiative was pushed aside in 2009 because of the slowdown in the world economy, and no substantial progress has been made since 2013. Hopes were high before the 14th India–EU Summit held in New Delhi in October 2017, where leaders expected to revive free trade negotiations. Three pillars of India–EU cooperation were determined during the summit: energy policy and fight against climate change, security policy, and the fight against the challenges of urbanization. However, while cooperation in the field of security and counter-terrorism appears to be failing, knowledge and technology transfer regarding the development of smart cities is of greater importance than ever for swelling Indian megacities. Despite continuous efforts, there is a mutual disappointment as annual summits seem to serve as a lip service without bringing about tangible results. 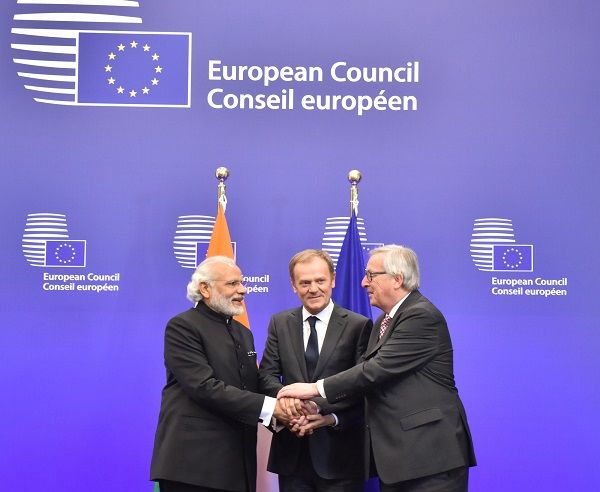 Negotiations of the Bilateral Trade and Investment Agreement (BTIA) have been dragging on for years and are problematic on many different levels. One of the European Union’s main conditions before concluding the agreement is easier access to the Indian market. Market access is restricted by a protectionist economic policy as India imposes disproportionately high tariffs on cars, alcohol, and dairy products coming from Europe. Furthermore, differences in the Member States’ export products greatly influence their preferences during customs negotiations, aggravating the problem. Alcohol is the most important export product for France and the United Kingdom, while the German priority is clearly a reduction of tariffs on vehicles.

Besides the quantitative barriers of the Indian trade policy, the lack of transparency in the Indian legal system has a major impact on concluding a deal, as it discourages European economic partners from realising foreign direct investments. In July 2017, the Indian government introduced the Goods and Services Tax (GST) in order to harmonise taxation and promote FDI, even though taxation of some (mostly imported) products still belongs to state competences. Besides the GST, a banknote demonetisation by Prime Minister Modi in 2016, in an effort to increase transparency, contributed to India’s long-awaited upgrade by Moody’s; a measure that took place after thirteen years. Despite all the improvements, the last EU–India summit did not lead to significant results, as neither party showed much motivation for change during the negotiations. To mention further legal obstacles, adoption of Rules of Origin for European products is a key element of the legal conditions required by the European Union. Yet another important hindering factor in the FTA negotiations is that India has not yet been awarded data secure status by the European Union. Security in handling European citizens’ data is crucial for India, as its foreign trade is heavily dependent on the export of ICT services and goods.

Brexit and the BTIA

While India’s relationship with the European Union is primarily economic, the country is connected to the United Kingdom on many levels, which is due to their shared colonial past. The transitional phase that the Brexit negotiations bring about raises numerous questions. The fact that there is not a joint interest—and consequently, a common stance—on a number of political and economic issues within the Union calls into question the necessity of a bilateral agreement with the EU as a unity rather than having separate trade agreements with each Member States. 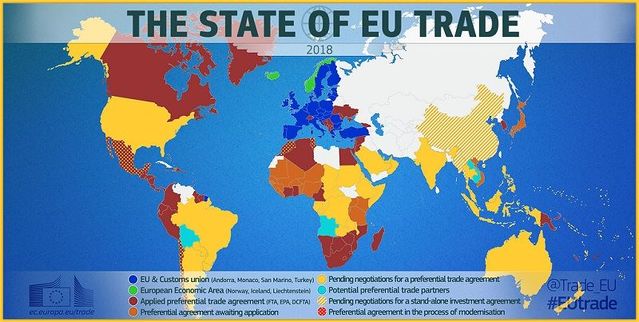 The EU trade agreements across the world
Source: European Council

The United Kingdom has functioned as an entry point to the European market for many Indian companies. The Indian ICT and automotive giant Tata Group has subsidiaries all across Europe. The United Kingdom’s withdrawal from the European Union raises a number of important questions for Indian investors regarding the regulation of the European value chain and the availability of markets. In 2017, the United Kingdom was the largest importer of Indian goods amongst the EU Member States, slightly ahead of Germany (importing respectively GBP 8 billion and GBP 6.8 billion’s worth of goods). Regarding EU exports, Germany and Belgium are the major contributors to trade to India (GBP 10.7 billion and GBP 8 billion respectively), while UK exports are less significant (GBP 4.6 billion). Germany has a trade surplus, while the United Kingdom has a significant trade deficit. As a consequence, an improvement of the European balance of trade is expected, following the Brexit, and perhaps a positive balance will follow despite India’s protectionist approach.

Despite the difficulties, both the European and the Indian side stayed positive following the meeting of the chief negotiators of the BTIA in Brussels in April 2018. Raised by the British, two key points that have halted the BTIA negotiations were the high tariffs imposed by India on alcohol and the conditions of European visa for Indian workers. (The UK had reservations on the latter fearing that the country would become the primary target for those young workers proficient in English that the struggling Indian labour market cannot absorb.) Following the exclusion of the United Kingdom from the bargaining of the free trade agreement, this obstacle may be overcome in the future.

The development of Brexit negotiations, therefore, has a major impact on India’s strategy during the negotiations of the BTIA with the European Union. Even though Brexit, seen from a sceptical Indian perspective, may call into question the stability and future functioning of bilateral economic cooperation, in fact, it might greatly facilitate future negotiations technically.

However, the sluggishness of coming to a compromise might also be a sign that this time, a young India wants to participate in the negotiations as an equal partner and mark its place in a changing world order. It would be a cliché to say that there is a great potential in India, but serious legal and structural reforms are still needed to exploit this potential when trading with the European Union.