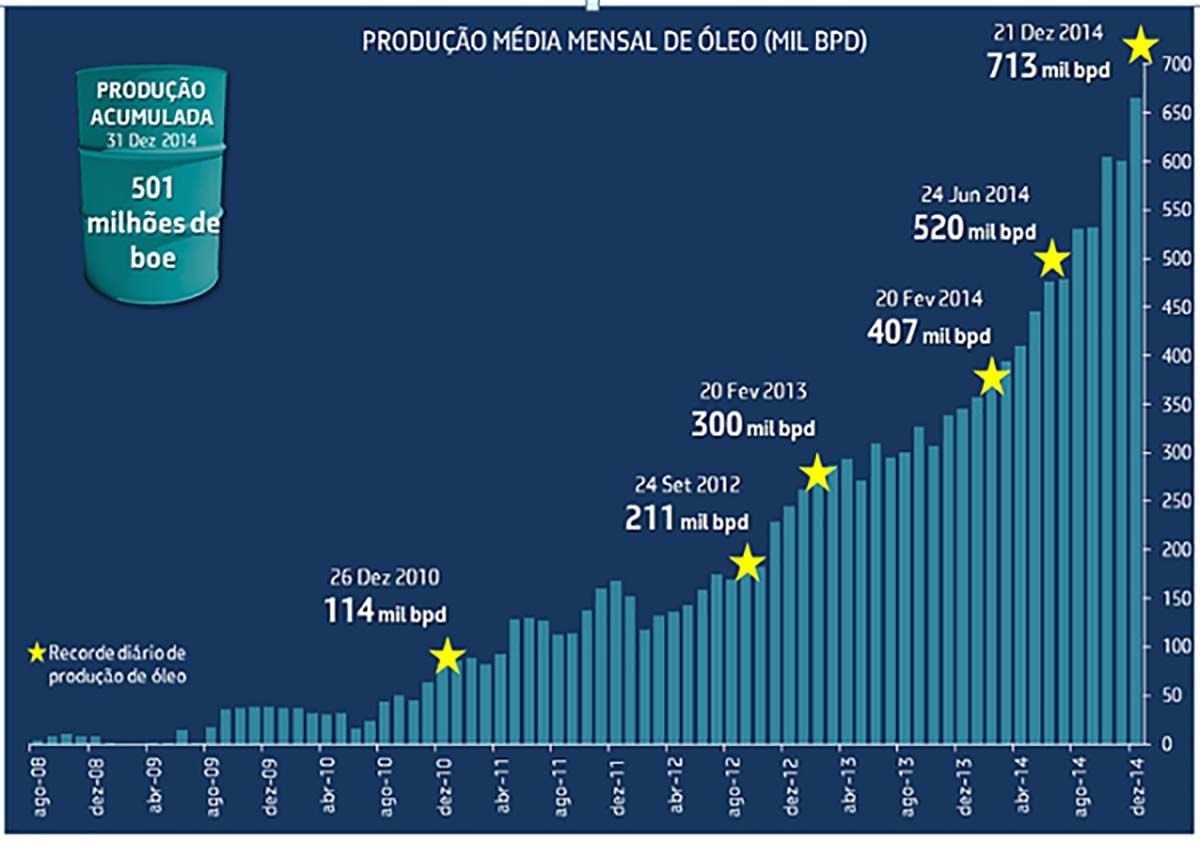 Highs And Lows, Ebbs And Flows

Lately, two of the main oil producing countries in Latin America have taken far-reaching steps to further open up their energy market. As the Mexican situation has already been analyzed on this blog, this post makes an attempt to examine the changes unfurling in Brazil, the country presiding over almost 40% of the new oil reserves discovered over the recent years.

Earlier this year a blogpost has already been dedicated to the background of oil industry changes inciting serious social upheavals in Mexico . The market liberalization afoot in the Central American state is not fully unparalleled on a global scale: there has been news from other countries, too, about governments letting private capital flow in erstwhile state energy monopolies. At the end of last year, for example, Russia sold off an unprecedented, 19.5% share package of its state oil company, Rosneft. Due to the imbalances in the country’s budget, other Russian companies are also expected to face a similar fate.

Zooming in on the Latin American region, over the last few years, Brazil has also put oil market liberalization high on its political agenda. And, thanks to the political and economic scandals unfolding since 2014, this process has gained a new momentum recently. Perhaps owing to their simultaneity, some journalists have not hesitated to draw a subtle parallel between what is going on in Russia and Brazil. Still, it is worthwhile scrutinizing that, beside the apparent similarities, which are the true motifs behind the changes occurring in South America’s biggest economy.

The onetime state owned energy industry leviathan, Petrobras (Petróleo Brasileiro S.A. – Brazilian Petroleum Corporation) was created in 1953, under the tenure of Getúlio Vargas, the renowned president of his time. The creation of the company also put an end to the epochal debate about the future of oil reserves in the country, during which the president, with a clear-cut preference for the economic development and sovereignty of Brazil, affirmed: “O petroleo é nosso!” (i.e. “The oil is ours!”). Compared to Mexican Pemex, the monopoly of Petrobras was dismantled almost two decades ago, in 1997, when, under the presidency of pro-market Fernando Henrique Cardoso, the allocation of hydrocarbon licenses was passed over to the Agência Nacional do Petróleo, Gás Natural e Biocombustíveis (ANP – National Agency of Petroleum, Natural Gas and Biofuels). Soon afterwards, foreign companies begun to enter Brazilian energy industry.

The new situation was altered when significant amount of deep water pre-salt oil reserves were discovered off the Brazilian coast. As a result of these discoveries, the country now retains the 14-15th biggest known oil reserves in the world. 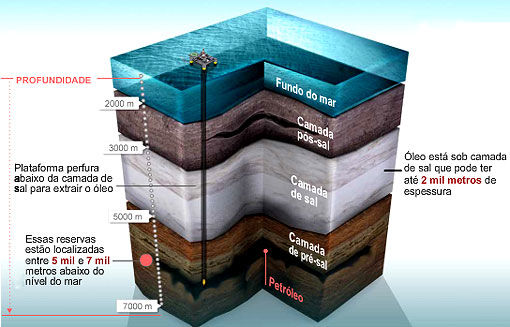 A diagram of the pre-salt extraction
Source: Wikigeo

A few years after their discovery, in 2010, the exploitation of these deepwater fields was set in motion. In order to reap maximum benefit of these natural resources of strategic importance, the Brazilian state reregulated the market employing PSAs (the abbreviation for production sharing agreements) instead of the previously used concessions. Thereby, companies participating in pre-salt exploitation are expected to split their “profit oil” between the company and the government. Petrobras, in turn, had a 30% ownership and exclusive operational rights of the allocated fields. 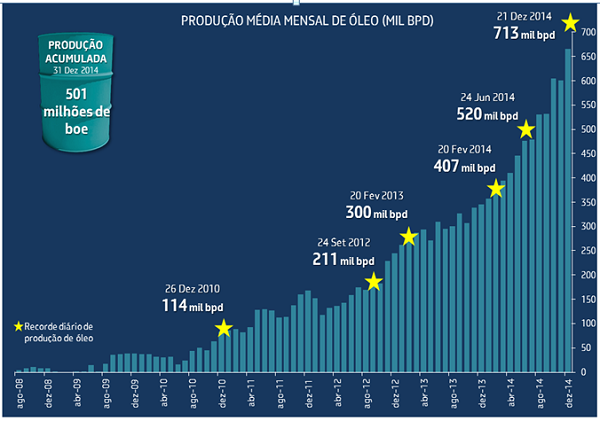 After the explorations on the new oil fields had started, the oil production of Petrobras begun to soar. In 2016, ten years after the first discoveries and six years after putting the first drilling rigs into service, pre-salt production set a new record and now accounts for the 35% of the company’s whole output. The production is expected to keep rising in the coming years, too.

Therefore, unlike Pemex, Petrobas is not suffering either from shrinking oil output or from inefficient oil fields. Still, over the last few years, the company needed to face serious financial problems, due to partly the swelling kickback scandal starting in 2014, which encompasses several politicians and large companies like Petrobras, partly to the government’s price regulations between 2011 and 2014, and, finally, to the sharp drop in oil prices starting in 2014. Moreover, as the company’s stocks have been in a descending channel without any upside breakout so far, many people do not see it as a lucrative investment target. Hence, with its debt amounting to $125 billion, Petrobras has become one of the most indebted companies in the Americas. In order to reduce its obligations, the company has resolved to take several austerity measures ranging from voluntary dismissal programs to selling some of its assets.

Although these measures have born some fruit, the inventive new company management that replaced the old one over the last years has been lobbying since 2015 so that the government make the regulations governing the activity of foreign companies working on pre-salt fields more flexible. For that would free Petrobras from the financial burden stemming from the company’s obligatory 30% participation in every newly allocated pre-salt fields.

A draft bill with the intention of flexibilization was passed in the Senate after a heated debate in February 2016, and, preceded by a bitter argument, it was also accepted by the Chamber of Deputies in October. The initiators of the law claim that they wanted to ease the financial burden weighing on the company and increase the production, whereas the opponents say the government is about to waste away the crown jewels of the oil reserves “for the price of a banana”. They also say that the government is preparing to further privatize Petrobras, and deduct money from healthcare and education heretofore subsidized with oil revenues.

On the cartoon issued by the federation of oil workers, the resentful blue collar comments:
“A negative Robin Hood”. In the meantime, the president, dressed as Robin Hood, says:
“I’m taking it from the poor… and giving it to the rich!” His sack of gold reads:
“health care – education – rights”.
Source: Federação Única dos Petroleiros

Their rhetoric, stressing national sovereignty and rife with anti-multinational and anti-American overtones, is also fueled by the fact that the law was initiated by Senator José Serra, a presidential candidate in 2010, who, according to diplomatic cables published on wikileaks, had earlier promised to North American oil companies grumbling against the act about PSAs that he would lobby for changing oil regulations to their advantage.

Despite the political disputes, the company itself assesses the changes favorably, as, according to the new law, Petrobras can keep engaging in pre-salt production without any hurdles, if it wants to. Moreover, from now on, the corporation can pick out the fields it gauges worthwhile. Therefore it can use its capital much more efficiently, and it may easier ward off any further indebtedness. It is also important to mention that the new law does not change the former regulation that 15% of the oil revenues shall be used to subsidize education and healthcare. Still, the sum going to these two strategic areas might as well be smaller, since there is no other company in the market that could produce oil more efficiently from the pre-salt field than Petrobras. Consequently, as the law determines that companies should share solely their “profit oil” with the state, the more expansive the production is, the less share the state will get.

However, nobody expects that these shifts are turning the Brazilian energy market inside out overnight. Predictions are rather about gradual transformations, all the more because deepwater oil fields usually take at least one decade to become operational after their acquisition. Howbeit, it is likely that, other than rendering new auctions independent of Petrobras’s financial possibilities, the government needs to take further steps, if it seeks to attract more foreign investors to the country. It needs to reduce the requirement which prescribes that production companies must rely on local suppliers in at least 60-70% of their procurements and, in order to enhance predictability, it must also extend the regulation named Repetro, which provides tax exemption for oil and gas investments, well beyond 2020. As both of the aforementioned measures would sorely affect local suppliers, it is safe to assume that opening up deepwater oil reserves will make further waves in Brazil.