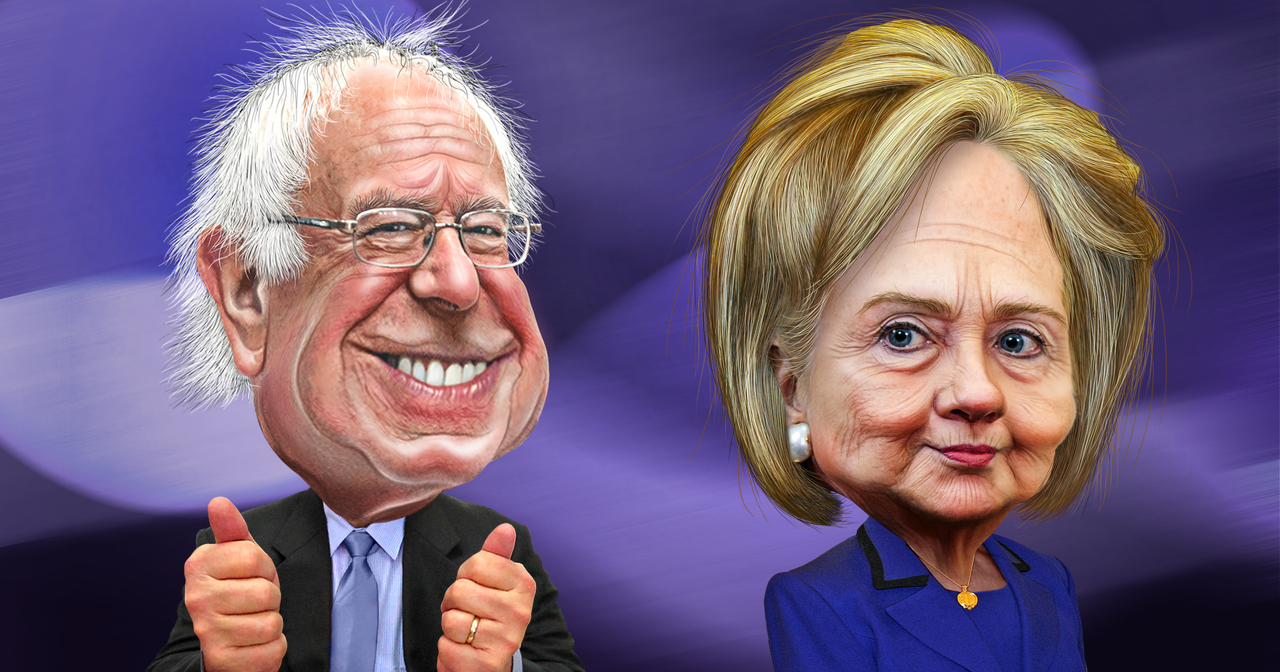 Going the 2020 presidential campaign, Hillary Clinton directed strident criticism against her long-standing rival, Bernie Sanders, who had hurt her image a lot during the 2016 elections. Is there a rational calculation behind the harsh words uttered by a politician principally known for her always prevailing aloofness? May her tactic work, or may it boomerang on her?

“I thought everyone wanted my authentic, unvarnished views!”, tweeted Hillary Clinton after conjuring up a firestorm with her recently revealed comments for The Hollywood Reporter on Bernie Sanders from an upcoming documentary, titled Hillary: “He was in Congress for years. He had one senator support him. Nobody likes him, nobody wants to work with him, he got nothing done. He was a career politician. It’s all just baloney and I feel so bad that people got sucked into it.”

Them’s definitely fightin’ words, and they predictably inspired a flood of questions, doubts, concerns, and criticism. As Clinton herself sort of admitted in the above-mentioned tweet, her statements were wildly out of character for a politician known for her dispassionate, calculating aloofness. Here are a few observations on the possible motives behind them, their substance, timing, and potential effect.

As always, I will be working with the assumption that the person at hand has a clear goal and acts in pursuit of that goal. Thus, in this case, is Clinton is assumed to be working to ensure that Donald Trump gets defeated in November, preferably by a politically and personally palatable candidate—so pretty much anybody but Sanders (or Gabbard, but that is another story).

Clinton’s vanity aside (Sanders and his followers certainly did a lot of work to cause lasting damage to her image), and following the above assumption, Clinton might hope that her harsh critique will drive the conversation in a direction that will put Sanders’s record as a politician under scrutiny in a way that will paint him in an unfavourable light, turning away potential and perhaps even existing supporters. There are words seemingly aimed at his already-converted, famously disdainful of the establishment (“he was a career politician”), and at people looking for a candidate who, instead of wanting to lead a revolution and tear down the entire system, aims to be a more moderate, pragmatic bridge-builder (“nobody wants to work with him, he got nothing done”). 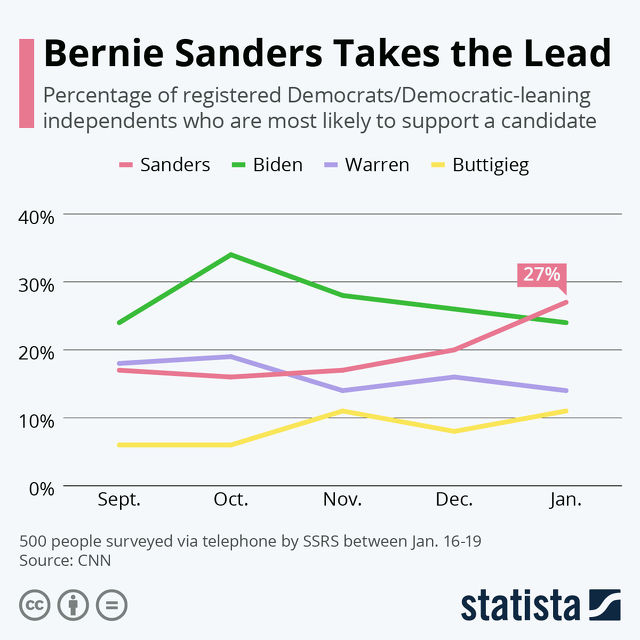 You will find more infographics at Statista
Sanders recently took the lead in the Democratic field according to a CNN poll.
Source: Statista, author: Willem Roper, licence: CC BY-ND 3.0

While the words in question are from an upcoming documentary, and were recorded a while ago, surely it is no accident that they were brought up in the interview. Well, Sanders has been breathing down Joe Biden’s neck in the polls, even capturing the lead in a recent survey (although that one came out after the interview). With the Iowa Caucuses fast approaching, these are the last days to throw punches before the first votes are cast and narratives start getting shaped by actual primary performance. (Sure, it is also a great way to kick off the promotional drive for the documentary with a bang.)

Is there merit to Clinton’s critique?

Speaking of putting Sanders’s record as a politician under scrutiny in a way that will paint him in an unfavourable light: Clinton’s attacks are not entirely baseless, although they are very much hyperbolic. In the post-2016 environment, it might be difficult to see Sanders as anything but one of the most influential figures of the US progressive movement, from his “Medicare for all” proposal to calling attention to corporate involvement in politics and paving the way for a new generation of anti-establishment politicians like Alexandria Ocasio-Cortez. However, for someone who has been a member of the legislative branch since 1991, there are remarkably few pieces of legislation bearing his name. Only three bills that he introduced eventually became law—and two of them concerned the name of a post office—while his record of enacting and co-sponsoring bills is indeed surpassed by many of his rivals, especially with their time in Congress factored in. That said, there are also ways to frame Sanders’s legislative work favourably: his House record on passing amendments requiring a voice vote is indeed—as one of his 2016 ads claimed—noteworthy, second to none under a Republican Congress, in fact, while even his performance on getting bills passed is not at all uncommonly bad for a member of the House minority caucus.

Perhaps, and likely only in the short run. Clinton remains largely popular with Democrats, so she is not wrong to assume that her opinion still holds sway among them. Considering how bitter their rivalry ended up becoming in 2016 (in no small part due to the Bernie campaign being built on his political and personal disdain for an establishment embodied by Clinton), Sanders’s diehard followers are only galvanised by such attacks—see, for example, their response to Elizabeth Warren’s recent allegations that her rival told her that a woman could not defeat Donald Trump—but one lesson of 2016 was that, no matter the degree of devotion, a person is good for one vote only. Sanders thus needs a considerably larger coalition to win the Democratic nomination, and Clinton might be hoping that by drawing thicker lines between Bernie and, for example, Biden (who are both intensively targeting the key demographic of white blue-collar workers), consolidating core support for Sanders might be a worthwhile trade-off for successfully containing it, thereby helping one of the party insiders secure the nomination. However, any potential advantage of this strategy is limited to the primary race.

Easily, especially in the long run. Just ask Hillary Clinton, who recently told Howard Stern that Sanders had “hurt” her against Trump in 2016 (there is an argument to be made that defecting Sanders voters in three key states cost her the general election). Or ask notable Democratic operatives who have gone on record questioning the wisdom of airing the party’s laundry. If Sanders turns out to be the Democratic nominee, it is hard to see how vilifying him will help consolidate broad support, necessary for securing an Electoral College win, within and beyond the party, and if another candidate ends up being the one to challenge Trump, feeding the resentment of Sanders’s staunchest supporters (who Clinton refers to by the somewhat derogatory term “Bernie Bros”) against the party will only add to the damaging vitriol that the former Secretary of State also laments in the interview referenced at the beginning of this piece.

So what happens now? The Sanders camp refused to fire back publicly, with the candidate brushing off the attack with elegant self-deprecating humour (“on a good day, my wife likes me, so let’s clear the air on that one”). Meanwhile, likely in an effort to avoid vindicating Clinton, some Sanders activists responded by not going on the offensive but instead creating and spreading the positive #ILikeBernie hashtag, with explanations of their support for the candidate on Twitter. In a follow-up tweet, Clinton assured her followers that she would “do whatever [she] can to support [the eventual Democratic] nominee,” which she seemed reluctant to do in the interview that kicked off the whole episode. The polls suggest that Clinton has little reason to believe that Sanders would stand no chance against Trump, and, thus, for the reasons mentioned above, letting the story fizzle out quickly seems to be in the best interest of all who are working to retake the White House.

Thanks to Arnold Velansits for contributing to this article.