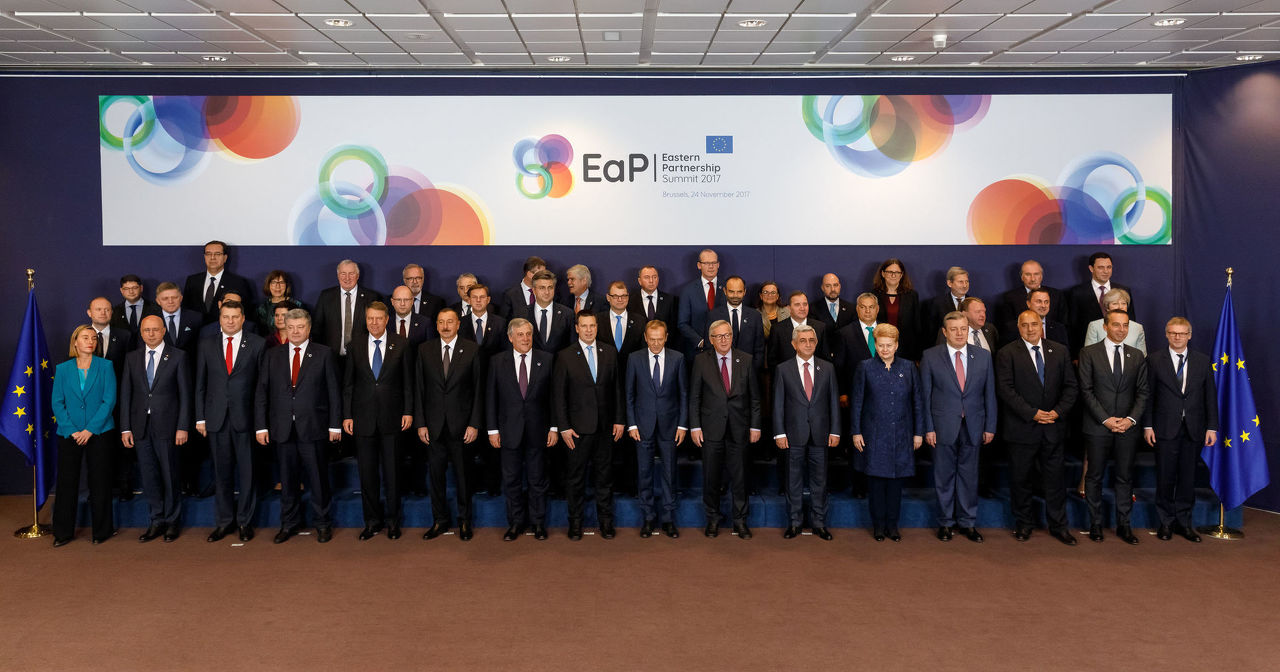 In the Eastern neighbourhood of Hungary, many post-Soviet states are struggling to reach the average standard of living in Central Europe. Due to their political, economic, and societal reforms, they can rightly wait in the lobby of the European Union. However, it is still possible that they stuck there forever without the slightest chance of grasping the opportunity for becoming a full member of the EU despite the support they have got from the EU’s neighbourhood policy and Eastern Partnership initiative since 2004. Did these efforts prove successful? What is the Hungarian diplomacy’s stand on the future of the EaP? How much hope the six countries—Ukraine, Moldova, Georgia, Belarus, Azerbaijan, and Armenia—should pin on future accession talks?

The story of the Eastern Partnership (EaP) started with an ambitious Polish foreign policy incentive to support Eastern countries’ stability-focussed development processes while also offering a slight chance of future, long-term EU integration. This would not have been possible without the support of one of the old EU members, Sweden, whose professional bureaucracy guided Polish diplomacy in the labyrinth of EU comitology. The goal was to create a more tailored approach than that of the European Neighbourhood Policy towards Ukraine, Moldova, Georgia, and Armenia, Azerbaijan, and Belarus. 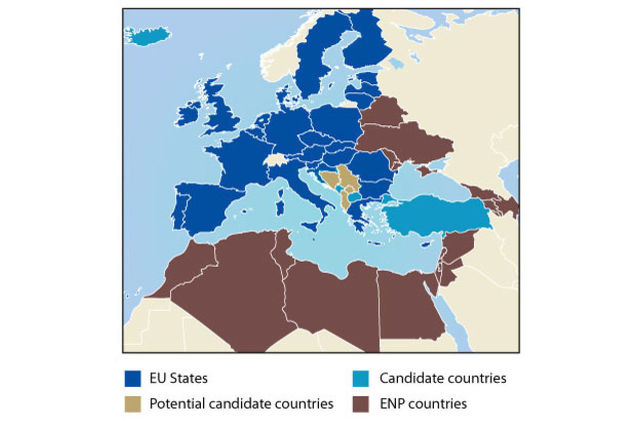 The countries of the European Neighbourhood Policy
Source: European Commission, licence: CC BY 4.0

Although Poland has done a lot, eventually the Prague process resulted in the establishment of the EaP. French President Nicolas Sarkozy and Mirek Topolánek, the Prime Minister of the Czech Republic, created an in-depth dialogue on the potential future of the idea originally coming from Poland during the Czech EU Presidency in 2009. Sarkozy offered his help in convincing other Western European states to support EaP with the condition of having Czech and other Central European states on board to support the Mediterranean Dialogue. Although the Sarkozy–Topolanec “secret” pact has been uncovered, none of the other EU members objected to the continuation of the process. However, the perspectives on the functions and goals of EaP differed fundamentally from the very first day of this instrument. The Western EU member states want to see increasing welfare and stability, while the new Eastern members prefer the promotion of future EU accession of partnership countries. The Belarus statement, which clearly rejected the accession plans, was the very first sign indicating that Russia will actively aim to hinder the deepening of ties between the EU and countries in its imminent neighbourhood. The Belorussian leadership’s declaration was followed by the 2008 Russo-Georgian War and the 2014 Ukraine crisis, which were the results of the misunderstanding of regional dynamics by the EU (and NATO) in terms of neighbourhood and enlargement policy. 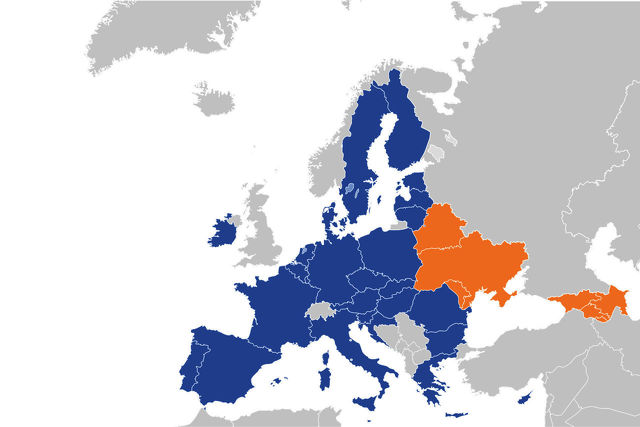 It is also important to evaluate the relative weight of the project within the financial framework of the EU. In the period between 2010 and 2011, the EU supported Eastern Partnership with EUR 600 million per year. It is worthwhile to compare this number to cohesion funds and common agricultural policy sources given to Poland that reached the amount of EUR 12 billion annually. Furthermore, we can see that the two-thirds of the neighbourhood funds have been channelled to North African countries through the initiative Mediterranean Dialogue between 2007–2013, which clearly showcases EU member states’ unbalanced attitude in terms of financial support towards the East and the South. Therefore, it is more credible and realistic to make recommendations if we can put them into the context of the whole project. Consequently, we should remember that EaP was originally a format which has been created on the basis of a tit-for-tat agreement between old and new EU members. In the past, it was plagued by constant signs of reluctance—indicated by the low numbers of development fund—and caused serious political tensions with Russia.

Fidesz–KDNP (governing Hungary since 2010) represented the standpoint that Eastern European states are fundamentally different than African countries, and, therefore, the EU should facilitate a differentiated approach towards them. These countries are historically part of Europe, and their stability is our vital interest. However, it is also essential for Hungary to have a strong V4 voice in Europe to highlight the importance of the southern neighbourhood regarding border protection, security, and stability. This approach echoed in the other three V4 states, respectively, and it has also influenced the recent approach towards neighbourhood policy in general.

However, it has to be highlighted that the EU and Hungarian interpretations of the “neighbourhood” differ significantly. For Budapest, the term “neighbourhood” presently means the Western Balkans in the South and Ukraine in the East. Consequently, Hungarian policy is rather reactive than proactive in the case of the Eastern neighbourhood of the EU, maintaining a significantly different position in the case of the Western Balkans. Hungary had to react to the internal dynamics of intra-V4 politics. Particularly, the Polish aim to attain a dominant regional position needed adjustments in Hungarian foreign policy. Poland declaredly wanted to be in the forefront of EaP–EU dialogue and successfully acquired the ownership of the first high-level EU summit on EaP in September of 2011. The original summit was to be held in Budapest on 27 May 2011. It also showed the commitment of Poland that Donald Tusk visited Armenia in 2010 to highlight the importance EU–Armenian ties, and he signed a loan agreement with Moldova in an amount of USD 15 million in the same year. He also facilitated free trade with Eastern countries. All of these steps of 2011 meant to be a sign for Hungary that EaP is primarily the domain of Polish diplomacy.

Hungarian diplomacy had the following options to react to the Polish diplomatic offensive:

A lot of events and changes have happened in the political and security environment since 2011, but this fundamental dilemma remained the same. Extensive support for EaP would alienate some Western countries and also Russia. While abandoning the project would risk the stability in Ukraine, Moldova, and Azerbaijan, which are key partners of Hungary. The most logical decision would have been to maintain the support for the political goals and wait for other players (especially Poland) to act first. As a contrast to this relatively passive diplomacy, Hungary puts key focus on the European integration of Western Balkan states in the foreseeable future.

2014 was a fundamental year for East European states. The Ukraine crisis arose unexpectedly even for the V4 countries, who supported the Euro-Atlantic integration process of the country. Many believed that the signing of the Association Agreement would go smoothly, which proved not to be the case. The Russian aggression against the Crimean Peninsula caused serious struggles for Hungary and its partners to adjust to the new situation. While the Hungarian government, together with EU member states, strongly condemned the Russian aggression, the geographical realities did not change, nor did the energy dependency from Russian companies and the ongoing ambitious project of building a new bloc for the Paks nuclear power plant by Rosatom. It is also important to mention that, right after the 2006 gas crisis, Hungary took steps to build its own gas storage capacities, while promoting the construction of North–South connector, which would decrease the energy sector’s vulnerability to Russia.

It was difficult for Hungarian foreign policy to manoeuvre between the more hawkish approach of Baltic states and Poland towards Russia and the doves like the Czech Republic and Slovakia, who would like to see the normalisation of economic and trade relations with Moscow. At first, V4 reacted rather quickly and decisively, rejecting the Russian aggression and expressing solidarity with Ukraine; however, the group’s unity was over time challenged by the Visegrad states’ differentiated approach regarding the implementation of sanctions against Russia.

This tendency also appeared during the 2016/2017 Hungarian V4 Presidency. The presidency program maintained the awareness level of Eastern Partnership within the V4 cooperation, but the topic of Western Balkan accession was a bit higher on the agenda.

On the level of political realities, the EaP constitutes an area of limited foreign political priority to Hungary. This approach stems primarily from the different focus of the Hungarian foreign policy strategy, which was reinforced by the events leading up and following the failed EaP–EU Summit in Budapest in 2011 and by the realisation that general Central European input (may it come from Warsaw or Budapest) did not have a significant impact on the enhancement of EU policies in the Eastern Neighbourhood. While Budapest supports the enhancement of stability and economic development in EaP states—especially Ukraine—its focus is clearly set on Western Balkan enlargement and not on the eventual fostering of institutionalised ties between the EU and EaP. This said, Hungary backs the deepening of bilateral and multilateral ties with Azerbaijan by the creation of an open energy market and increase interconnectivity for diversification. Budapest also would support a potentially pro-EU government in Moldova on its road towards the creation of a free trade agreement with EU-states.

Based on the mentioned above, the following points could realistically contribute from a Hungarian perspective to the strengthening of the EaP format while also resulting in substantial benefits: