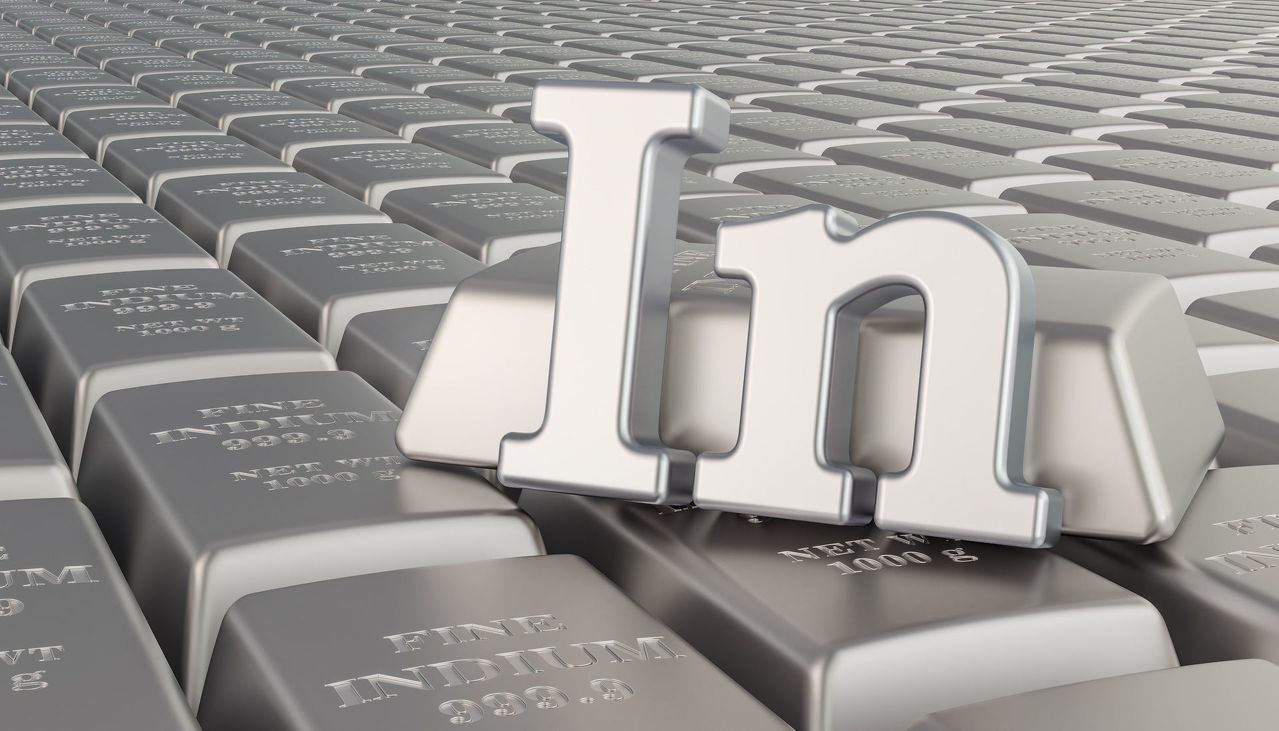 What Is That, and Why Does It Matter?

Talking about the management of electronic waste, we often hear about “exotic” materials to be found in the technical equipment we use every day. Last year, nearly one and a half billion mobile phones were sold around the world, not to mention the sales of iPads, cameras, and flat-screen TVs. But what might stand in the way of the constantly increasing consumer experience, and what could cap this seemingly unstoppable growth?

In the sixth row of the periodic table, we find a hidden group called the lanthanides—honestly, a part of the table that might rather look like an extended footnote most of us ignored during our high school chemistry studies. However, from screens to permanent magnets and from optical to control systems, almost every high-tech device requires elements or a combination of elements from this group. This article will highlight one of its members which we probably hold in our hands almost every day, while it is granted that only a few people have ever heard of it: the indium.

It is a relatively rare element in our environment and occurs in only a few minerals. It can be found in some zinc ores, usually extracted from mining and metallurgical residues, and lead, tin, and copper ores. Extraction and the indium’s separation from the base ores are particularly significant on the Asian and American continents, and, in 2011, USGS surveys estimated that there are 15,000 tonnes of economically viable indium deposits.

Major indium producers in the world in 2017
Source: ReportLinker Research

Although discovered more than 150 years ago, the remarkable properties of indium have only been exploited recently by the high-tech industry. More than half of its use (55%, to be exact) is due to the production of liquid-crystal display (LCD) screens, in which the so-called indium-tin-oxide is essential. So this metal blend has actually created a whole new industry in the last decade. We all use flat screens on a daily basis, but many other uses of indium are also known: laser diodes, dental applications, nuclear reactor control rods, corrosion inhibitors, low melting-point alloys, and solder components. In addition to many other applications, our low-energy LEDs and solar cells are also made of a metal blend called indium-tin-oxide. 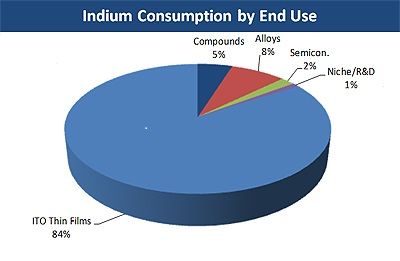 This fragile material is able to form an electrically charged layer, and its metal blend is well suited for sensing the accumulated electric charge of the human skin, while it is also transparent. So surfaces covered with it become manageable with a touch; actually, this is the science behind touchscreens. This surface becomes a complex system, just like a computer on which your finger plays the role of a keyboard and a mouse at the same time. What is natural today, however, was a revolutionary novelty a decade ago: in 2007, Apple, taking advantage of the amazing features of indium, launched the first touchscreen phone, and so a new industry was created with its demand for rare raw materials. 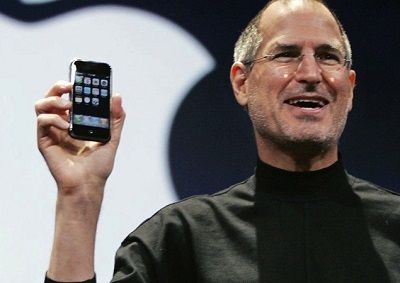 Not surprisingly, due to the new technology, the demand for indium has since grown tremendously. This element is widespread in the Earth’s crust, but its concentration is very low. More than two-third of the proven 15,000-ton reserves is located in China, but, according to an estimate by the Indium Corporation of America, there are about 50,000 tons of possible resources globally, whose roughly 47% is in China and the CIS.

Indium production is mainly linked to the mining of lead-zinc-ores (most commonly found in nature in combination with zinc), which is why a significant part of the indium is extracted from a mineral called sphalerite (a lead-zinc-sulphide containing mineral). Extraction from this ore requires, among other things, acidic dissolution, and only a very small amount of indium can be detected at the end of the process, usually below 0.01%. (Just to give a hint, a smartphone contains three hundred times more gold per kilogram than indium.)

It is not an easy task to calculate the size of the current reserves or their decrease, as it depends largely on how the technology built on them changes and evolves. Exact extraction rates of precious metals are usually undisclosed by mining companies, and the scientific community has just begun to recognise this problem.

In line with the growing demand for LCDs and flat-screen televisions, the rise of indium prices has also accelerated. The price rose from USD 60 in 2003 to USD 1000 within three years. Such uncertainties raise far-reaching questions, while our demand is increasing. The number of smartphones sold in 2018 reached 1.44 billion—one of them is perhaps the one you have in your pocket. Meanwhile, supply fell when many Chinese mines stopped extracting indium from zinc. In 2002, it was possible to get indium for USD 94/kg, while, in recent years, prices have sidewayed around the USD 360 range.

Obviously, the cost of indium is much lower as a by-product than it would be if produced by itself. So once the demand for indium exceeds the quantities available as a by-product, the thin-film technology market will have to get used to more expensive resources. 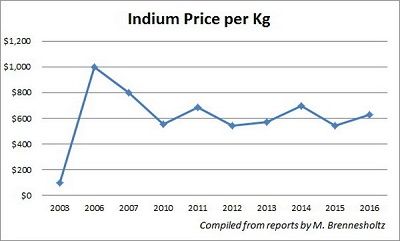 “I call indium the spice of metals, you just scatter it into products, and then it is almost impossible to recover it,” says Armin Reller, a material chemist of the Augsburg University. It is a good question what kind of options might arise for replacing indium, as it is quite a challenge to find a transparent, lightweight, and conductive material. Researchers from Germany and Japan are working on a flexible polymer-based material called PEDOT, to which various chemicals have to be added to enhance its transparency and conductivity. (However, being a polymer, we would need to rely on an oil- or carbon-based solution.)

In 2013, the EU published the list of rare raw materials that have key importance for the European economic activity and are essential for maintaining and improving our quality of life—small wonder indium, among other elements, was also part of this register.

The recovery rate of indium is quite low, usually around 20%. However, prices around USD 700/kg could make the recovery from our everyday items economically viable. However, facing major concerns about demand growth and availability, speculations also appeared on the market, and it is possible that raw materials like indium might shortly become increasingly popular investment products.

So the question is at what point one should invest in these kinds of materials, and whether it will be one of the big businesses of the coming decades. But we can also expect some new elements to be discovered in the near future whose chemical properties can only be suspected for the moment. From time to time, it is proved that Mendeleev’s periodic system is not a timeless creation, and, according to optimistic estimates, science will be able to prove the existence of 173 elements in the near future, compared with today’s 118.