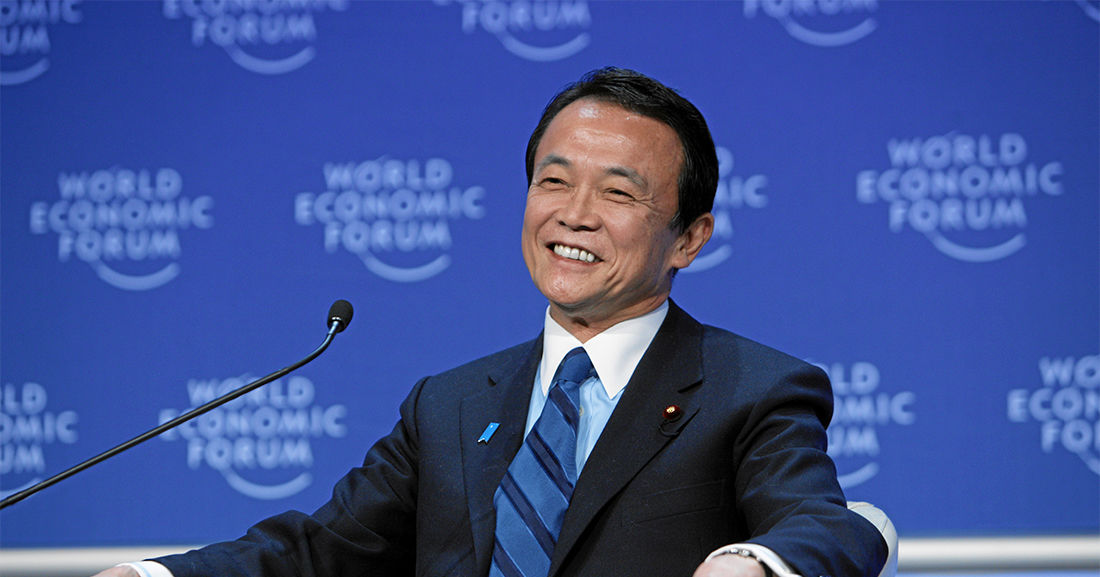 Large and in charge

Who is Tarō Asō?

Much talk and more controversy has surrounded Japanese Finance Minister and Deputy Prime Minister Tarō Asō ever since he entered politics. Although 2018 got him involved in the Prime Minister Shinzō Abe’s money scandal, he did not stand down, ignoring opposition voices and public opinion. Even PM Abe himself does not think it would be necessary for him to do so. But what is the reason behind Aso’s immunity?

The Moritomo Gakuen scandal, that has been dominating Japanese media for a while, has finally reached Tarō Asō too. The murky land deal, which included a considerable discount to a school operator (Yasunori Kagoike), can be traced back to PM Abe’s wife, Akie. The evidence of this connection was wiped entirely, as it turned out from to the Finance Ministry’s report. And by whom? Interestingly enough, it is the Ministry of Finance that was responsible for the alteration of the relevant documents. Naturally, the opposition parties demanded that the head of Minister Asō take responsibility and resign as a minister. But he did not. Even PM Abe in his interviews expressed that he does not wish Asō to resign, for he needs him to stay to reestablish order in the ministry. In a final attempt to take the blame instead of the prime minister, or his wife, Asō announced that he would give back one year of salary, along with punishing 20 other finance officials by cutting their salary and giving them verbal reprimands. 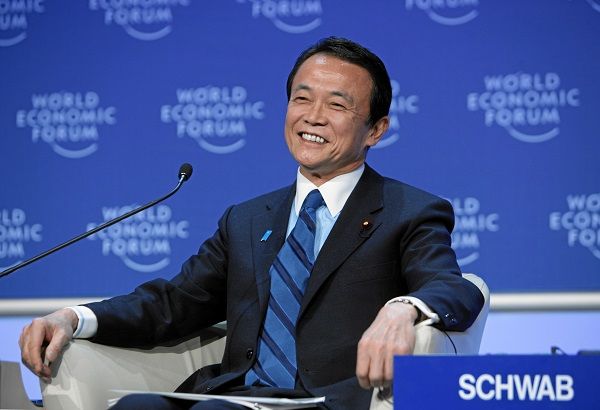 Knowing Asō’s background, this act might seem only symbolical, since Asō is actually the wealthiest cabinet member. Not only does he have an extraordinary family background—his grandfather being the legendary post-war prime minister, Shigeru Yoshida, and his mother a daughter of a prime minister—but his father was the chairman of the Aso Cement Co. and the Aso Mining Company, providing for him a stable and remarkable fortune. His social status elevated even further when his younger sister married into the Imperial Family, becoming Princess Tomohito of Mikasa, the cousin-in-law of Emperor Akihito. In this sense, one year’s worth of salary must not be such a huge loss for the Finance Minister. But how did we come to this? 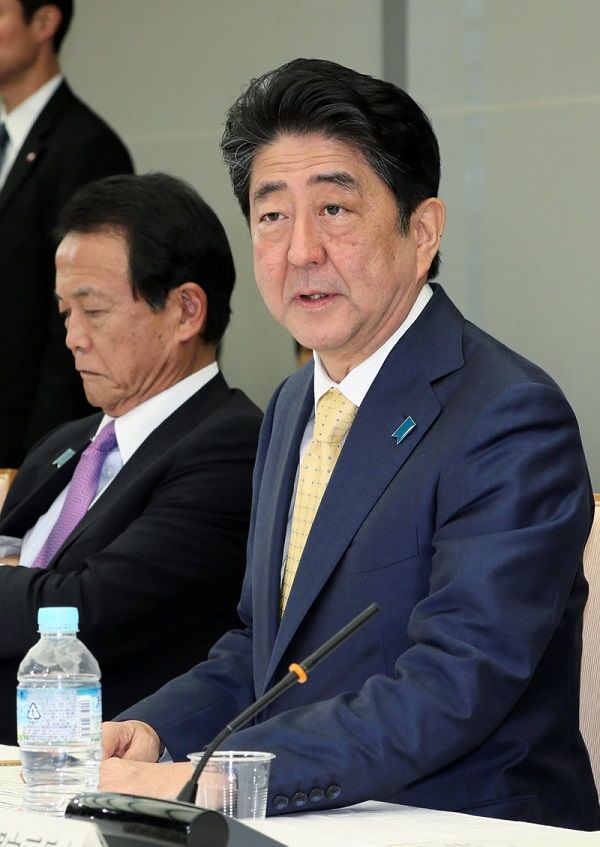 Asō’s political career started after working a couple of years in Sierra Leone, joining Aso Mining Company of the giant conglomerate Aso Group, and becoming part of the Japanese shooting team in the 1976 Summer Olympics. Being part of a politicial dynasty, it is almost impossible by Japanese standards not to enter politics at one point. There are several interesting aspects to who and what Tarō Asō is. His ancestors played a huge part in the modernization of Japan in the Meiji Restoration, but his family is essentially part of a religious minority, being a Roman Catholic. And that is definitely not an advantage if we consider voter demographics, because Catholics are representing only 0.5% of the total population of Japan. This can be a reason why he does not pronounce his faith so often, and rarely appears praying to the Shinto kamis. Regarding his political identity, it is not as conformist as one might think. His career took off in 2003, when he became a cabinet minister under Prime Minister Junichiro Koizumi as Minister of Internal Affairs and Communications. Even at this time, Asō was already renowned for his controversial gaffes, and he has many. In 2001, he said he wished to create a Japan where “rich Jews” would love to live. On another occasion, he made praising comments about the Japanese colonial rule in Taiwan regarding educational initiatives. Since the basis of the Japanese colonial rule was the so-called “Japanizing” effort, this comment fueled anger in the countries falling victim to this initiative. Asō, however, did not stop there. His right wing colored heart shone in 2006 when he suggested that the Emperor should visit the Yasukuni shrine, the infamous headquarters of those glorifying war-time Imperial Japan and denying all the horrors that happened in Nanjing or Korea. Due to this connotation, the emperor has been boycotting his visit to the shrine.

This instance was no laughing matter—but it was made possible by PM Koizumi, who was the biggest advocate of visiting the shrine and paying respects (also) to the war criminals buried there. Due to the ultraconservative views of Koizumi, several hawkish LDP members were drawn to him during his tenure. One of these politicians was current Prime Minister Shinzō Abe, who served as Deputy Chief Cabinet Secretary then. The three of them represent similar ideas—ideas that are promoted by the infamous Nippon Kaigi lobby group, which has strong opinions about Japan’s role in World War II. These include denying the Nanjing Massacre, the existence of comfort women, and several other known atrocities committed by the Imperial Japanese Army. These beliefs explain the many distasteful gaffes that Asō said in the past, one of which was praising the Nazi method of changing the constitution: stealthily, without anyone noticing. Another time he praised Adolf Hitler directly, claiming that he was bad, but he had the right motives.

His remarks are bound to spark anger not only in the national media, but sometimes in the international community too. However, despite the low tolerance of the Japanese public regarding political mishaps, Asō was never removed directly from either of his posts. His high social status and his embeddedness in LDP circles were not the only factors saving him from resigning. His brief time in the post of prime minister in 2008 gave him just enough experience in the forming global financial crisis and its management, so he could become the minister of finance under Abe’s second tenure. In the pre-Abe era, revolving door prime ministers were the standard for more than 20 years, and thus, Asō was not able to stay in office for more than one year either. However, he managed to become such a rooted member of the Liberal Democratic Party that today he leads an entire faction. It must be due to similarities in their views regarding history, national identity, and economic policies that Abe and Asō had joined forces after the major LDP electoral failure that followed Asō’s term. Just like Asō, Abe is focusing the most on boosting the sluggish economy of Japan, and in that, making Asō the Minister of Finance is of key importance. The alliance of these two is what mostly kept Abe in power so far, making him the longest-serving prime minister in a long time. Asō’s faction is otherwise the core powerhouse of the Abe administration, for it is the second biggest one, and since Abe himself does not lead any faction, Asō’s provides the basic majority inside the LDP ranks. Such factors might be involved in the answer to the question of why Asō is not forced to resign despite the sentiments of the opposition and the public, which are quite flustered by his unconventional and oftentimes scandalous public communication (including derogatory and segregative comments targeting a social minority group), not to mention the Finance Ministry’s part in the Moritomo Gakuen scandal that has been poisoning national media for more than a year now. It is undeniable, however, that his exceptional skills in public speaking, relying on his sense of humor, his love for pop-cultural elements such as anime and manga, and his efficiency in the English language help him in staying relevant and in-touch. 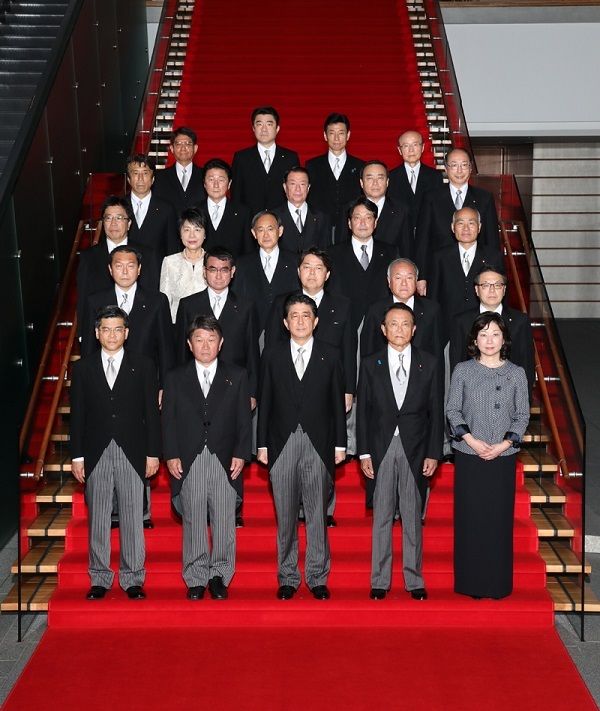 The current Abe government with Asō being second to the right in the first row between Seiko Noda and Shinzō Abe
Source: kantei.go.jp, author: 首相官邸, licence: Government of Japan Standard Terms of Use (Version 2.0)

Some speculations have been going around lately that the reason why Finance Ministry officials decided to come forth with the story of the cover-up of the official documents stating that Akie Abe was involved in the Moritomo Gakuen land deal is because Asō is going after Abe in the LDP presidential race, aiming to become a prime minister once more. But the way in which Asō handled the question of responsibility regarding this issue—i.e. cutting salaries and handing back his own—is an effort to calm the tensions, instead of blaming Abe for this shenanigan. Asō’s trickery had helped him to raise between LDP ranks so far, but the biggest hurdle is ahead. In September, during the LDP presidential elections, we will see whether the true colors (which he is not afraid to show to anyone) of Tarō Asō will help him in positioning himself or not.