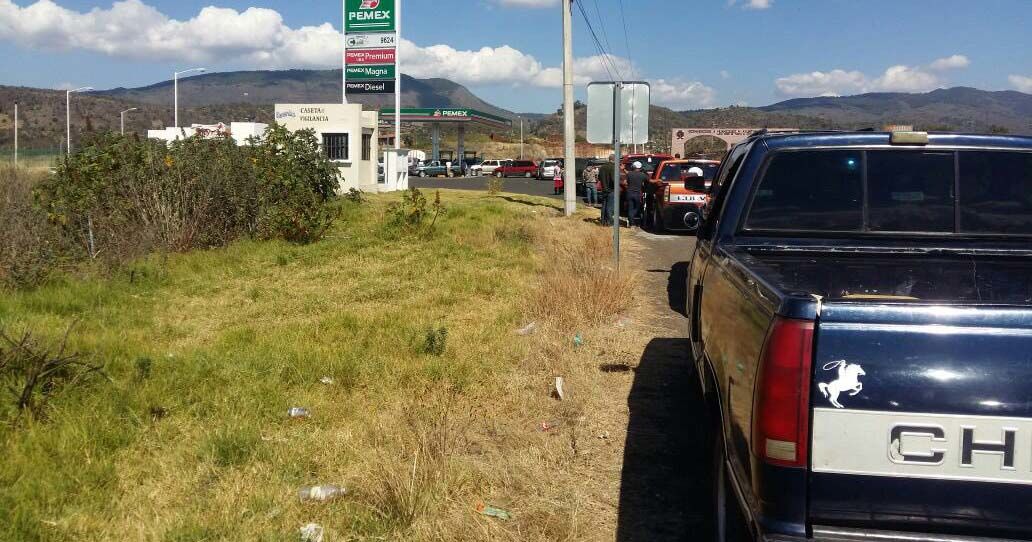 It’s been a busy season for Mexico’s energy industry. While December’s end saw vehicles queuing up at gas stations, the beginning of January was marked by protests, rife with violent scenes, detentions, and even fatalities.

The lengthy queues were due to gas shortages in ten of the thirty-two federal states in the country. The factors leading to this situation were many: first, the state-owned petrol company, PEMEX (Petróleos Mexicanos), responsible for both upstream and downstream operations in the country, has a shrinking production owing to maintenance repairs and other complex problems. Second, tappings causing headaches to PEMEX, while generating high incomes for criminal gangs, are becoming more rampant, and, finally, buyers and vendors speculating for hiking oil prices dried up the oil supply. 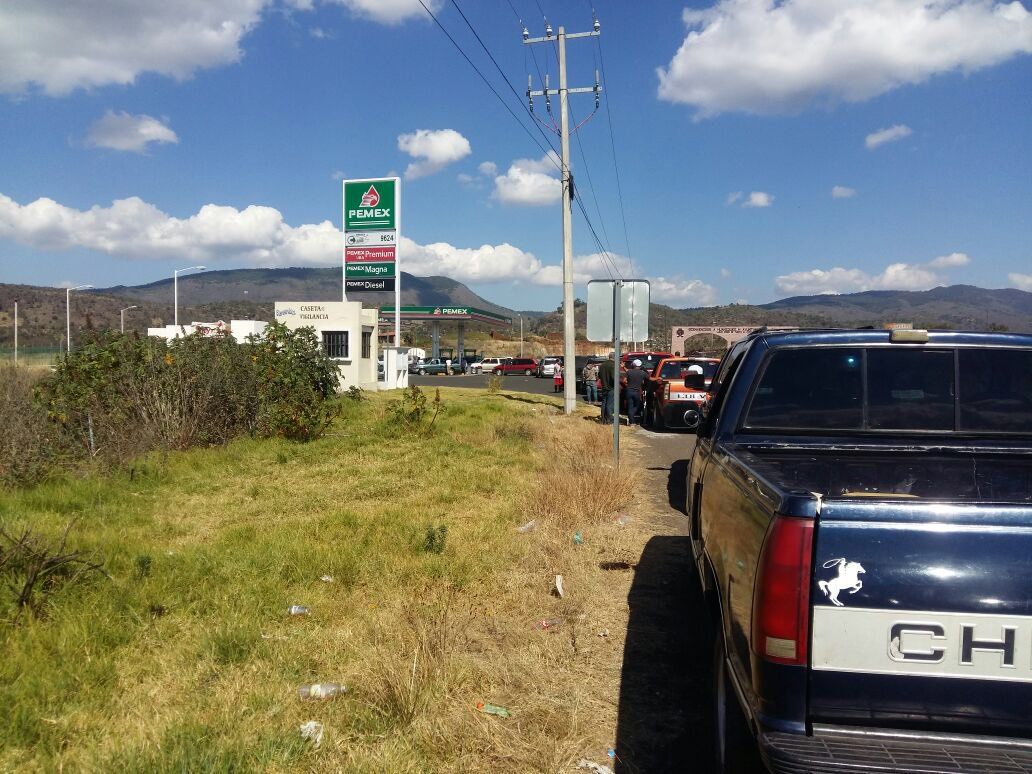 Lengthy row at a gas station in the state of Michoacán on December 30, 2016
Source: Twitter

On the other hand, the protests, along with the aforementioned speculations, are the clear consequence of petrol prices gone wild from January 1, 2017 on. The prelude to this situation was that at the end of December the government announced its intentions to gradually liberalize the country’s heavily subsidized and thus artificially low fuel prices from the beginning of this year. As a first step, it would regionally maximize prices 14-20% higher than their previous level, then, as a next step, it would move to weekly and, finally, to daily price setting. Price liberalization would take place in five major stages, starting from the Northern states near to the US border, and then inching more to the South. The whole process should conclude by the end of 2017, and thenceforth, pricing would be defined according to world market prices, logistics costs, and taxes levied by the government.

Notwithstanding the intense protests, the government is firm on pushing on with its reforms. The President, Enrique Peña Nieto, also affirmed in his message to the country at the beginning of the year that disparity between local and international prices had long caused significant losses to the government budget, while the money spent on subsidies deprives the country of development resources. In his view, maintaining artificial prices would result in reducing social programs and such a step would only benefit the richest 12 million responsible for the 40% of petrol consumption in a country inhabited by more than 130 million people.

By contrast, protesters claim that gasolinazo, i.e. petrol price increase, will mostly weigh on the ciphers, the farmers and the producers, who have already been spending a record-high, 3.38% percent portion of their income at the pumps. And, as their reasoning continues, higher petrol prices affecting the whole economy will render manufacturing and transportation more expansive, which must be either absorbed by the producers or passed on to the consumers. This was also affirmed by several leading economists who voiced their opinion that direct and indirect effects of the liberalized prices would add to inflation in 2017. Provided the central bank of Mexico needs to take steps to control inflation, rising interest rates can reduce the country’s competitiveness. 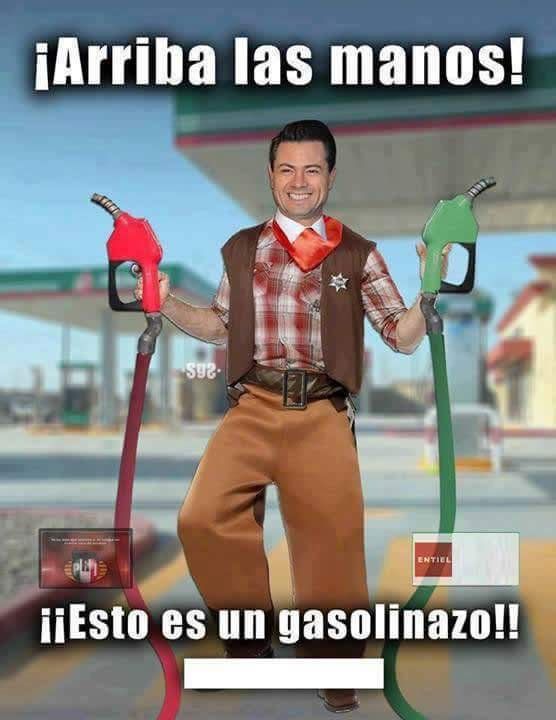 Stick ‘em up! This is gasolinazo!! – says Enrique Peña Nieto dressed as a cowboy on this meme
Source: Twitter

However, the government believes that price liberalization, and new foreign and private sector contenders entering the Mexican fuel market will foster competition, which, on the long run, can lower prices and create new jobs. According to this positive scenario, after the present price shock, inflation can get back to the targeted level in 2018.

Obviously, the opposition to Peña Nieto, whose approval ratings have never been so low since he was elected in 2012, strives to reap benefit of the situation, stating that not only gasolinazo, but also the government’s energy reform started back in 2013 were an error.
Their criticism and allusion to Reforma Energética put the whole situation in a broader context. On the one hand, there is a country with its 2.04 BPD oil consumption which is expected to grow by 2-3% in the coming years due to the country’s expanding economy and the increasing car sales. On the other hand, there is an unwieldy company which cannot keep up with the augmenting energy consumption because of its unprofitable operation, accumulated debt and depleting oil fields. PEMEX, a state-owned enterprise since 1938, reached its peak production in the first decade of the 2000s, and its oil-output has been shrinking by 25% thereafter. Apart from these, the company’s efficiency is at rock bottom: according to its 2015 balance, its losses increased by 96% while its debts rose by 30%. As an obvious result, PEMEX has no resources to open up new oil fields, introduce new exploration technologies, or update its capital asset running at 60% of its real capacity. 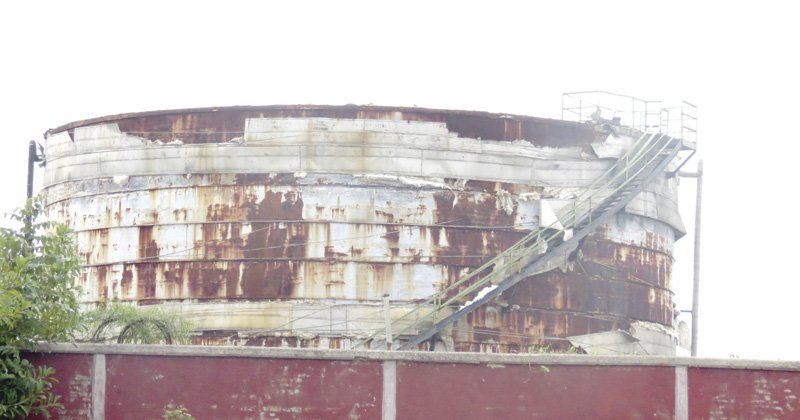 The latest attempts to modernize the 102-years-old oil refinery at Ciudad Madero were not concluded owing to budget cuts; recently, the terrible conditions have even left one dead
Source: Twitter

This foregoing situation made the government opt for liberalizing the energy market. Thus, after the closing of the reforms, new state and private actors can partake in the refining, transportation, storing, sale and exploration of hydrocarbons. The government expects that all these will lead to a gain in its oil revenues, which, in accordance with its promises, will serve to finance social programs and human resource development.

The liberalization of this gargantuan market opens up huge opportunities for a great array of new investors. Small wonder, the auction to sell drilling rights on the deep-water oil fields in the Mexican Gulf, presumably containing 76% of Mexico’s all oil reserves, was successfully closed in December. One of the major competitors were US-based multinationals, some of which has already made capital out of satisfying Mexico’s growing appetite for more oil.
What is not clear, however, is how the future of the North American Free Trade Agreement, which has oftentimes been harshly criticized by the new American President, Donald Trump, will affect future perspectives. Walking away from NAFTA would mean a hard blow to Mexican–American relations in the energy sector, too, which must be obvious to the new Secretary of State and former CEO of ExxonMobil, Rex Tillerson as well. An eventual US isolation is likely to make the Mexican government rely more on Chinese and European companies as investors and its energy suppliers.

All these imply that energy liberalization in Mexico depends on a number of complex factors, which range from street protest in Mexico, through Mexican opposition promising the withdrawal of recent reform, to lobby interest in North American politics. However, provided that oil prices keep going up from the low-water mark of the recent years, future Mexican governments must face an ever-shrinking elbow room to rescind Peña Nieto’s reforms.