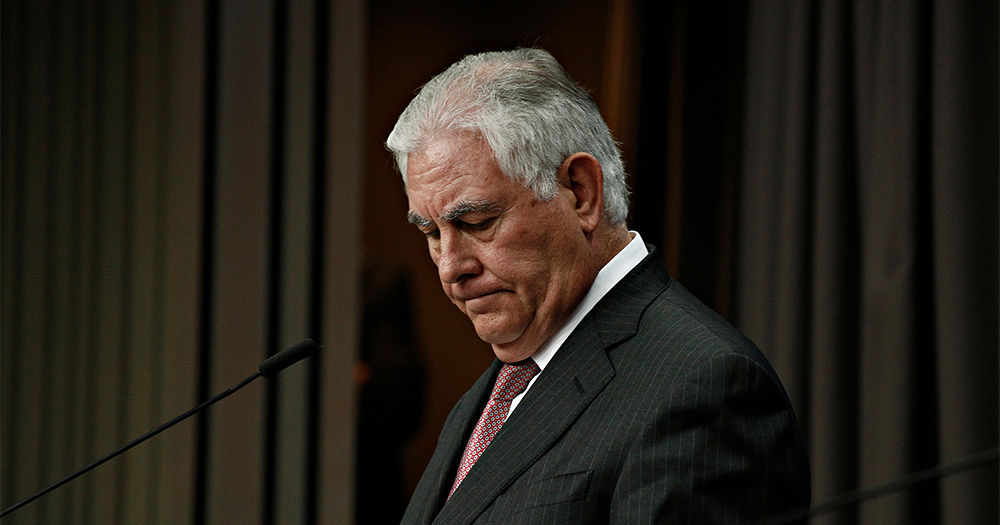 No more T. Rex in the foggy bottom

It has been more than a year into the Trump Administration but still hard to tell the new direction of American foreign policy. Last week the ouster of Secretary of State Rex Tillerson may be the part of the answer—but more likely just another puzzle. What did Mr Tillerson do in his 405 days in office and what legacy he has? Some labelled him as the worst foreign secretary of all times. We try to go after it.

It has been more than a year into the Trump Administration, but the new direction of its foreign policy still looms large. When Rex Tillerson was nominated Secretary of State, the immediate response was his association with Russia. His Russian ties date back to the 1990s when, as CEO of EXXON, was working in Russia. His Russian acquaintances, combined with the Russian meddling scandal engulfing the Trump Presidency, fuelled fears that Tillerson would be soft on Russia. Some even voiced radically that the Foggy Bottom would be governed from the Smolenskaya. More moderate voices raised concerns about Tillerson’s scepticism of imposing sanctions on Russia—noting that the Secretary’s own business and retirement funds were also greatly affected by them. Clearly, Tillerson was not soft on Russia and the sanctions were not lifted, but he was constantly inspected all over his tenure if he was anti-Russian enough, or not. On 6 April 2017, when 59 Tomahawk missiles has been launched against Syrian government positions from American warships, the perception about the new foreign policy has changed largely. Even though he vowed to work for bettering Russian–American relations, the U.S. did not move on either Syria, or Ukraine, or the sanctions. Tillerson’s remarks, identifying Ukraine and not the meddling as the biggest thorn in U.S.–Russia relations, was just a more Republican reformulation of a sort of anti-Russian politics. After all, the National Security Strategy of 2018 names Russia and China as great security threats.

In others words, while he was trying to mend fences with Russia, he remained tough on most issues, but still he was not often considered as anti-Russian. When news broke of his dismissal, many pointed to a most recent scandal involving Russia, the poisoning of a former spy in Britain, assuming that the ouster of the Secretary of State was a consequence of his anti-Russian stance. Russian journalist Olga Skabeeva commented with much self-esteem that firing Tillerston right after criticizing Russia meant “Trump is ours!” Chronologically, it does not hold water, as by the time Tillerson blamed the murder on the Russian government, he had already learned about his dismissal. Indeed, the White House almost instantly denied that the latest statement about Russia played any role in firing Tillerson, without denying many other embarrassing details of the event. Anyway, Tillerson was the first Secretary of any kind to be dismissed with a tweet. 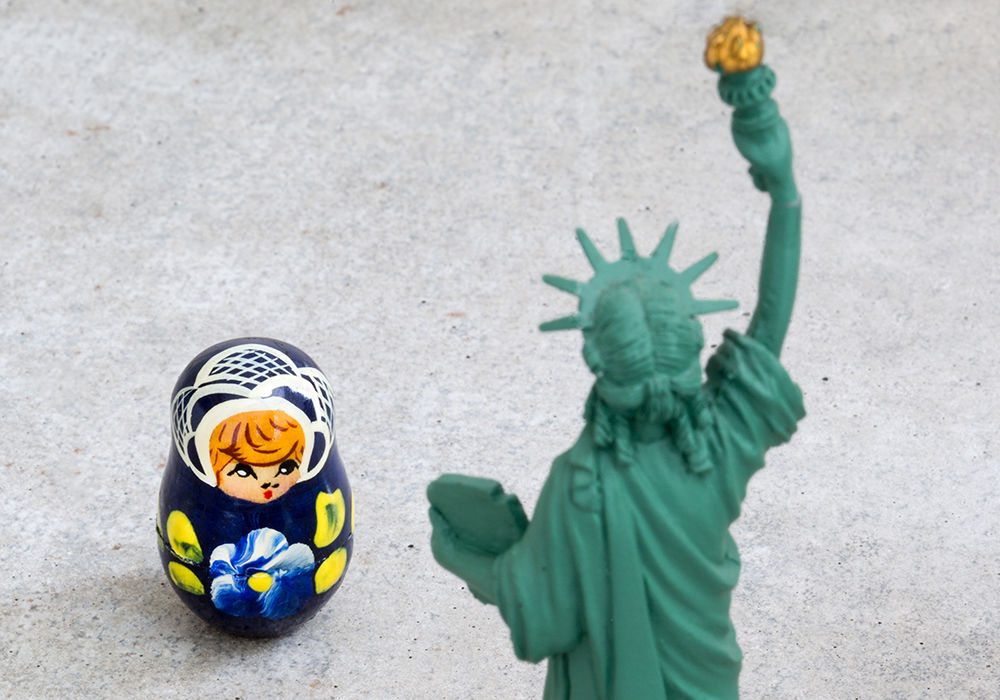 The smile of the matryoshka—it is more mysterious than the Russian–American relations
Source: Shutterstock

For those coming to Washington on an anti-establishment, anti-Washington ticket, the greatest challenge is how to get people “unwashingtonian” enough to serve in government. The last seriously anti-establishment person to hold presidency was Richard Nixon, who spent enormous energy and most of his political credit on fighting bureaucracy. Nixon and his foreign policy mastermind Henry Kissinger were fundamentally at odds with established professionals at the Foggy Bottom so they decided to do it themselves and bypass bureaucracy. And so, there was a discontinuity in Republican staffs from Nixon to Reagan. Today, the same problem mounts before the Trump Administration: how to fill the administration with people apt and loyal, able to enforce political wishes in a largely hostile environment. People tend to be reluctant to work for this Administration as it has a reputation for not being loyal to its own members. The Administration, in this sense, is more like a façade, with a fully completed first row, but an often partial second and third tier, or filled with people from previous administrations. Even Republicans seem unwilling to take posts, and it is particularly true for foreign policy. 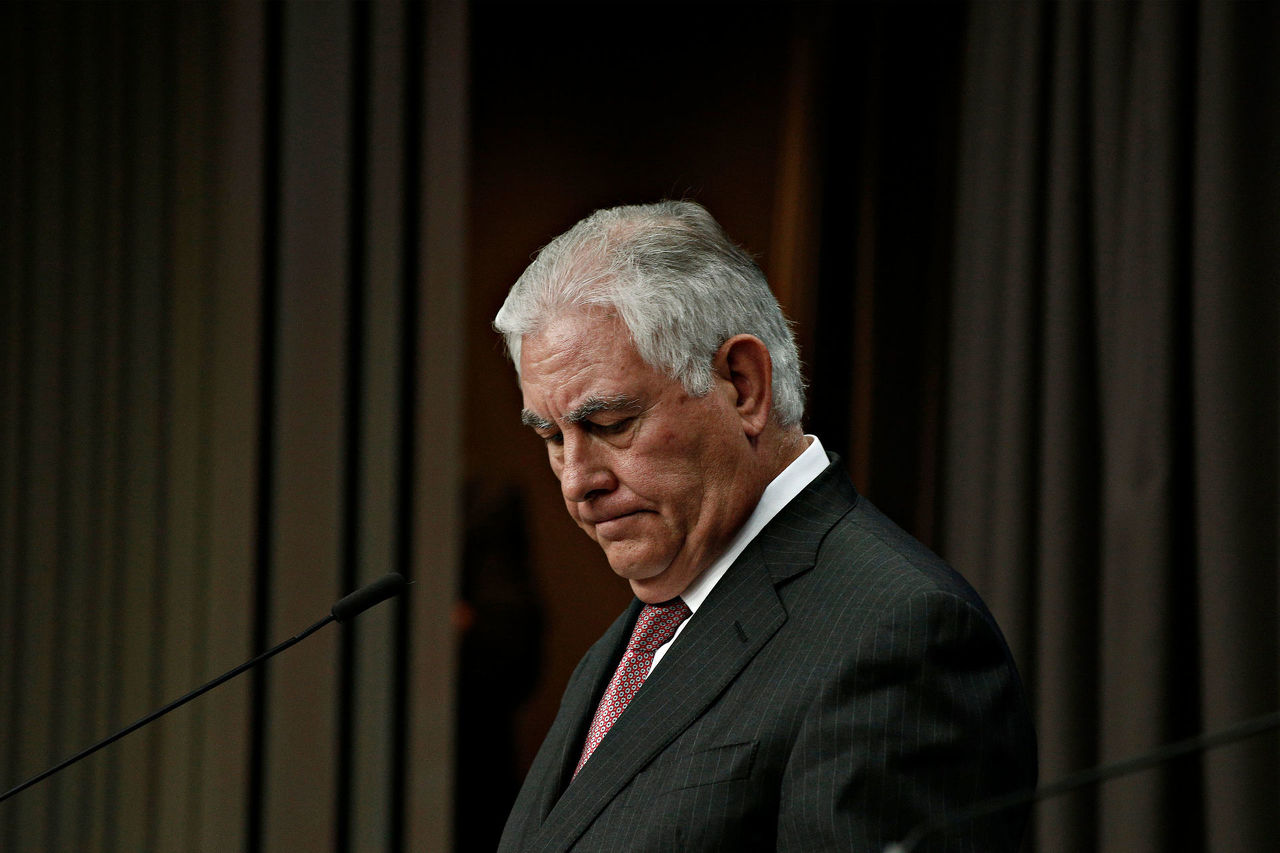 With the lack of an overarching vision of post-2016 foreign policy, Tillerson arrived to the Foggy Bottom with a set of priorities, the first of which was reining in bureaucracy. His credentials as a tough dealmaker made him perfectly fit into the self-image of the Trump Administration. Another theme was a shift from multilateralism to bilateral relations, from global mission to national interest, all of which was evident in the recommended cuts in foreign aid. His signature project, however, remains the attempted revamping of the State Department. It aimed at saving costs, reduce numbers, filling voids, and increase the amount of loyal bureaucrats if possible. A most natural objective with a definitely poor implementation—at least, hardly anyone speaks positively about the effort. In fact, most observers pointed to the vacancies of ambassadorial posts (see the map at this link), the downsizing of budget and infrastructure, and the from the State Department. Even though it is not sure if the exodus of experts was an intended purpose or not, their replacement was clearly not ready. From the outset, many cited the botched campaign to reform Foggy Bottom as a reason well enough for Tillerson to file his resignation. From senior members of the State Department to Inside-the-Beltway politicians, dissatisfaction grew rapidly against his managerial, corporate leadership style.

The Downfall of Tillerson

What then caused his sudden dismissal? Well it was not sudden in the first place, as his disagreements with President Trump has been brewing for almost day one. The fact that Trump never really trusted him, nor taken his advice seriously, put the role of the Secretary within narrow confines. May 2017, when Trump and Tillerson visited Saudi Arabia, was probably the high point of this relationship. Ever since, disagreement was mounting: when Tillerson was negotiating with the North Koreans, Trump said it was a waste of time, when the Secretary deemed negotiations far ahead, the President publicly announced his proposed meeting with Kim. Their views diverged on a set of different issues as Tillerson did not want to let the TPP go, wanted to improve not drop the Iran deal, and wanted to reassure America’s oldest allies, among them the NATO countries. Another structural issue behind the early dismissal of Tillerson was that he was never let in Trump’s inner circle. He was often not invited to host top level diplomats from foreign countries, often left home when Trump travelled, and rarely had the opportunity to advise Trump. Instead, the press started to call him and some others (Defense Secretary Mattis and National Security Adviser McMaster) “the axis of adults” who were keeping an eye on Trump. So, the President and the Secretary were in two different sectors of their own administrations. 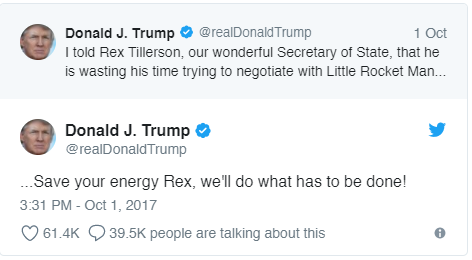 An example that tensions are far from being newfound between the two politician
Source: Twitter

So, what consequences may be drawn for American foreign policy or the Trump Administration? First, it turned out that “pro and anti” attitudes towards Russia were not a critical issue. “Russianism” is not a standard in American foreign policy—“Trumpsim” is, and this was an obvious point where Tillerson handicapped. It has been underlined again that classic foreign policy is not a Trumpish genre as the President still consider business mentality and military craftsmanship superior to the educated elite of the Foggy Bottom. All this bodes well for the incoming secretary, Mike Pompeo, who has worked in both military and business environment, and has access to the President. Being the Director of the CIA for one year was already a position where he made close ties with many in the administration. His views are always closer to Trump’s than his predecessor. His attitude is more hawkish than that of Tillerson, particularly on Iran—and presumably on Russia, too. Pompeo is not likely to face the two-front battle Tillerson fought: to be too Trumpish for the lower echelons, and not Trumpish enough for the President. The whole diplomacy is expected to move more to the Right, and the redesign plans are most likely to be shelved, while a quite trench warfare with the bureaucracy might still continue. According to Trump, he and Pompeo have similar “thought process,” which would definitely help end the public ambiguity of American foreign policy. All the while, the excellent personal relations between the Secretaries of State and Defense, so characteristic before, might end.

What we can expect is a more coherent, more unified foreign policy strategy that is at the same time more hawkish in the classical sense of the word. The replacement would, however, not solve the problem of how to make alternative foreign policy with a reluctant and shrinking bureaucracy. In the long term, one either has to change bureaucracy, or let themselves altered by it.