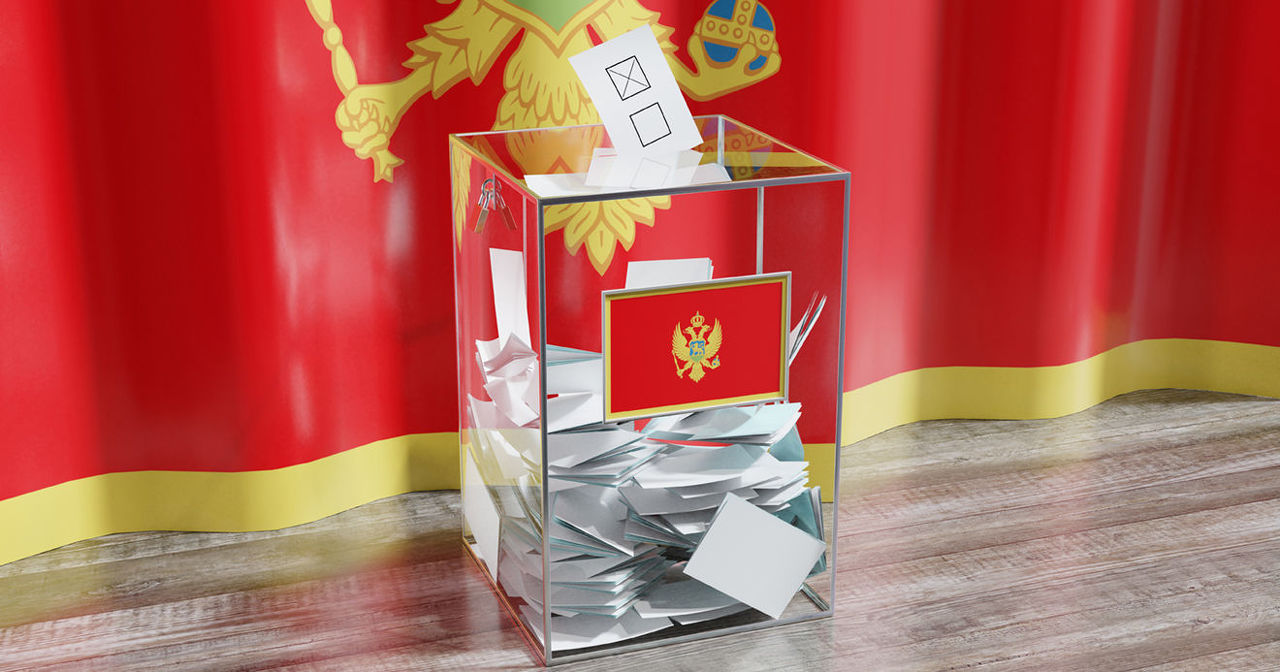 A Historical Shift in Power after Thirty Years

For the first time since the introduction of the multiparty system in 1990, the voters have elected a new political force into power. On 30 August 2020, during the country’s eleventh parliamentary election, with a turnout of more than 75%, the citizens of Montenegro have voted for a governmental change. The absolute dominance of the Democratic Party of Socialists of Montenegro for thirty years (ruling in coalition with several other parties) has been broken as a result of various factors. The new governing majority is formed by a coalition of three parties: For the Future of Montenegro, civic Black on White coalition and Peace is Our Nation coalition that have won twenty-seven, four, and ten mandates, respectively.

Since the country regained its independence in 2006, the political scene in Montenegro has been highly polarised and divided. This is partially due to the proportional system which allows citizens to vote for party lists, while mandates for the Parliament are transformed based on the percentage of votes received countrywide. Elections have been monitored by international organisations and several NGOs from Montenegro, which have over the years publicly called out irregularities, among others, in the voters’ registration process and the voting procedure, also highlighting the institutional advantage of the ruling majority.

In the last two years, there have been several developments on the political scene that influenced the most recent electoral result. The first one involved the minority parties that, in the past, always were part of the ruling, DPS-led coalition. Based on the current electoral law and due to the multiethnic composition of the inhabitants in Montenegro, the threshold for minority parties is set low to assure their representation in the parliament. However, it was also favourable to the ruling Democratic Party of Socialists (Demokratska partija socijalista Crne Gore, DPS). In this sense, attention can be drawn to the case of the Croatian minority party, the Croatian Civic Initiative (Hrvatska građanska inicijativa, HGI). The internal conflict between its members led to the formation of new a party, the Croatian Reform Party (Hrvatska reformska stranka, HRS) in 2020. This division caused votes previously cast for HGI (on average 0.4% of the total) to be split between HRS and HGI, leaving both parties without a mandate in the new government and depriving DPS from a crucially important coalition partner.

Another important factor that influenced the recent election is the government’s assertiveness in the fight against the COVID-19 pandemic. Montenegro has been proudly declared to be the last country to confirm the virus on its territory in Europe and the first one to announce its complete victory over it. Opening its borders and takeing inadequatly the measures recommended by the National Coordination Body resulted in serious economic outcomes, poor performance in tourism, and bigger indebtedness, causing the economy to drop by more than 20% and thousands to lose employment. Besides, citizens have also expressed dissatisfaction with the management of several other policies of the government including projects that harmed natural resources and the possible prolongation of the contract for a highway that has already made Montenegro significantly indebted. These clearly reflect existing problems that were mentioned as points of concern by the European Union, such as corruption, non-transparent institutions, and issues with media freedom and the national public broadcaster. In addition to the already fragile situation of the institutions, Montenegro’s citizens have been witnessing the presence of police brutality and physical violence, for example, towards members of the opposition in the governing bodies of Budva. This further impacted the electorate and served as an evidence for instability in the whole country.

Lastly, the factor with the greatest impact on the fall of the government was the adoption of the new Law on Religious Freedoms, which resulted in an unforeseen backlash against President Đukanović. The law helped the opposition mobilise the electorate, which was notiecable in the turnout and in the case of some swing votes from the ruling coalition. The aim of the Law on Religious Freedoms is the registration of all religious communities established on the territory of Montenegro, while it also intends to “return” all religious objects built before 1918 (when Montenegro was unified with Serbia) whose ownership cannot be proven to the state. This clause has been especially problematic considering the dispute between the Serbian Orthodox Church (Srpska pravoslavna crkva, SPC) in Montenegro and the Montenegrin Orthodox Church (Crnogorska pravoslavna crkva, CPC). It is important to highlight that the religious and cultural ties that Montenegro has with Serbia and that have developed throughout history resulted in 30% to 40% of the population in Montenegro declaring themselves as Serbian minority and members of Serbian Orthodox Church. The law provoked widespread protests involving a great number of people, while it also gave the opposition the incentive to support the SPC by claiming that the church is under attack and that the government is aiming to establish its own church. European Commissioner for Neighborhood and Enlargement Oliver Varhelyi stressed the importance of dialogue on this issue, which the parties have so far failed to achieve. He also pointed out that the European Union followed the issue with great interest. An additional proof of the tremendous influence that SPC has is the fact that the leader of the biggest opposition party first met the members of the church after the victory.

Electoral results have in the end been recognised by all parties involved, so officially thirty-eight mandates were won by the previous governing coalition and forty-one by the three major parties of the opposition. Two mandates won by the Social Democrat Party still have not been officially attributed to either side. After the elections, the celebration by opposition voters has been surrounded by controversy. Many have been disappointed that the celebrations have been marked by a strong feeling of pro-Serbia- and pro-Russia politics. Protests and gatherings against such political behaviour were also held by other citizens who stated their intention was to defend their “independent” Montenegrin values (unofficially, the organisation has been attributed to DPS). These events have been held in the light of recent incidents involving attacks on Albanian and Bosniak citizens and the destruction of their property. The attacks have been equally condemned by the new governing majority, the new opposition, and the international community.

After the election, the European Union has issued several statements commenting on the events. Some of the political analysts have pointed out how vague the EU’s reaction seemed as they failed to provide any indication as to whether or not it supported the new governing coalition and to form a clear opinion on the current political situation in Montenegro. High Representative of the Union for the Foreign Affairs and Security Policy Josep Borrell and Commissioner Varhelyi have congratulated on the peaceful and competitive elections, calling for a more detailed observation of the coming OSCE report and an engagement in transparent and inclusive dialogue for Montenegro to progress further in its accession path towards the EU. Ana Pisonero, the Commission’s Spokesperson for Enlargement, Neighbourhood, International Partnerships called for respecting minority rights and pointed out that Brussels was closely monitoring the situation emphasising the importance of problem resolution between political actors.

Considering all the above-mentioned aspects, many wonder what the future will bring. The differences in the programmes and ideologies of the parties that now hold the majority in the parliament will have to be resolved, and a common ground has to be found. However, the identity question is important to most political parties in Montenegro, especially to those forming the new government, which creates a big obstacle for an ongoing political cooperation. The main driving force, the joint intention to criminally prosecute DPS’s leader Milo Đukanović and overthrow the DPS, a party that ruled for over thirty years, was in a way achieved, and, now, nationalistic and identity questions should be left aside to continue the path that Montenegro has been building since regaining its independence in 2006. So far, the future governing coalition has formulated four principles that it aims to follow: strong support for the creation of an government of experts, the continuity of a Euro-Atlantic path for Montenegro, the “acceptance” of all existing state symbols, and the acceptance of international agreements. In this sense, the illusions of revoking the recognition of Kosovo or a potential exit from NATO have been dismantled. The emerging idea of a government of experts has been widely supported as a step towards building the “new” common ground. The question is how the EU will react to the current situation in Montenegro and the activities of the new cabinet. Additional questions may be raised bearing in mind the fact that, according to the media, pro-Western governments have expressed concern over the nationalistic pro-Serbian and pro-Russian orientation that will with new governing coalition be present in key institutions such as the Ministry of Interior Affairs or the military. This potentially puts confidential informations shared by other NATO member states at risk.

The new government majority now has a difficult task to deal with problems Montenegro has encountered over the course of the past decades, such as the rollback of the democratisation process noted both by the Freedom House and European Union and the difficult economic situation further aggravated by COVID-19 virus management, corruption, and the poorly functioning institutions, followed by disputed laws and an overcrowded state administration. An additional issue that will resurface is the question of political cohabitation, as Đukanović’s presidential term expires in 2023, with his party now forming the opposition.

The political developments in Montenegro following the governmental shift will be interesting to observe. The opposition has secured a highly important victory, but it remains to be seen whether a small civic party will be able to calm the nationalistic tendencies of its bigger coalition partners so that the government successfully tackle real issues that have to be solved.