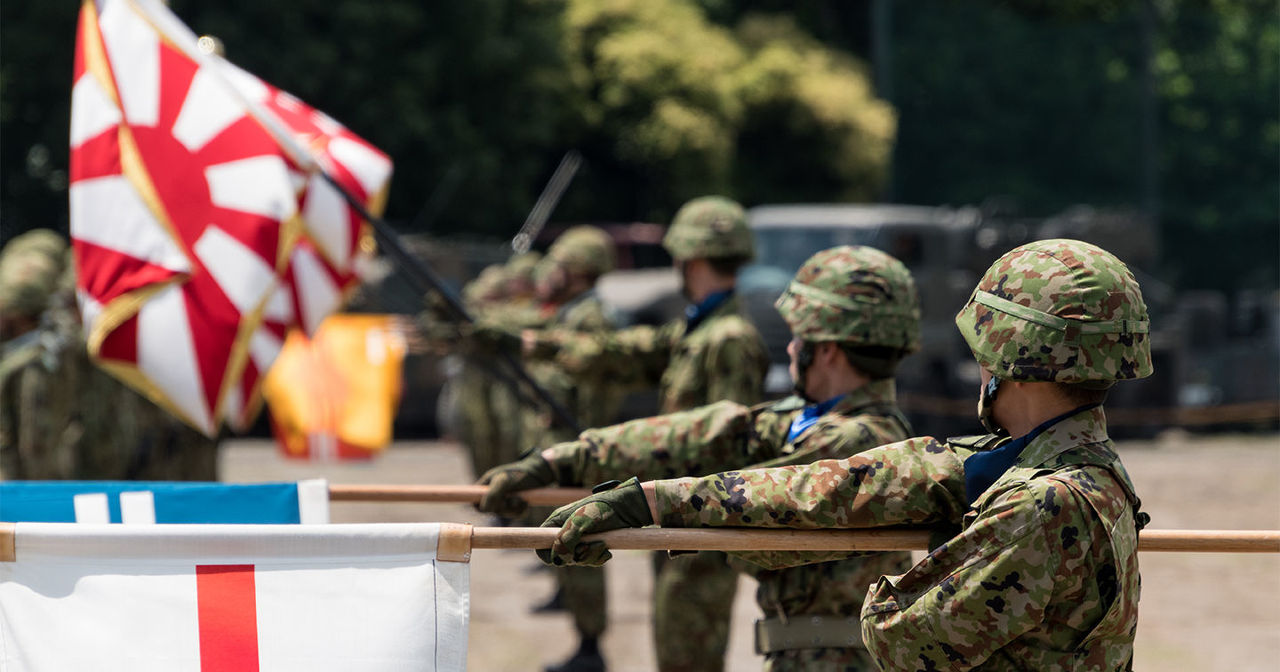 Shifting Capabilities and Focus Points of the JSDF

The Japanese Self-Defense Forces has seen a gradual overhaul over the recent years. Although they have been cutting back on their former capabilities, they still rank among the strongest armed forces globally because of their new procurements and recently created units, and they are also intent on maintaining Japan’s curb on the fast-changing East Asian security architecture.

In accordance with the country’s new military guidelines, the Japanese Self-Defense Forces (自衛隊・Jieitai or JSDF) undergo a series of changes that—together with the new air, naval, and army acquisition programs—will result in the creation of a more mobile and deployable military force. Mobility and the availability of adequate tools at hand are of key importance to the JSDF, as its main focus is now on China and its rapidly growing modern naval and air arsenal.

For many decades following the end of World War II, Japanese forces were trained, equipped, and prepared to fend off, in close cooperation with US forces, a possible Soviet military invasion against the country’s main islands. This priority, in accordance with the baselines of Japan’s pacifist 1947 constitution and the re-establishment of the country’s military forces in 1954, meant that the JSDF was gradually becoming a well-armed force equipped with weapon systems that aimed to primarily discourage possible adversaries from an attack or, in the worst case, prove to be suitable to defend the country, and chiefly the northern island of Hokkaidō, from invading forces. The collapse of the Soviet Union and the end of the Cold War led to the disappearance of a traditional military threat by the mid-1990s. This void was steadily filled by an assertive China, an unpredictable North Korea, and a growing Russian Pacific military presence. The renewed emergence of Chinese territorial ambitions in the South China Sea, combined with the creation of a potent Chinese surface fleet that, by the end of the upcoming decade, might have as much as half a dozen aircraft carriers at its disposal, means that the JSDF has to readjust its capabilities if it wants to guarantee Japan’s territorial integrity—including that of the disputed Senkaku Islands in Okinawa Prefecture (controlled by Japan but claimed by the People’s Republic of China, where they are known as the Diaoyu Islands). Japan’s National Defense Program Guidelines, published annually since 2004, highlight this shift. During the last one and half decades, Japan has initiated the acquisition of military assets that have not only cemented the JSDF’s place in the top ten strongest armed forces in the world but also enabled a much more flexible response to a variety of future security threats. These include the purchase of fifth-generation stealth fighter aircraft, the commissioning of major naval assets, and the modernisation/reorganisation of the army.

Currently, there are several projects underway to continuously modernise the Japan Air Self-Defense Force’s (JASDF) aircraft fleet. Japan announced its intent to purchase 42 F-35 Lightning II stealth fighter aircraft from the US in 2011, with 38 of them assembled locally by Mitsubishi Heavy Industries. In December last year, the JSDF opted for the additional procurement of 105 aircraft—63 of the conventional take-off and landing F-35A variant and 42 of the STOVL (short take-off and vertical-landing) F-35B variant. Deliveries are in progress and, as of May 2019, 12 F-35s have been accepted into service with one lost in an accident this April. Moreover, Japan and the US agreed on the sale of further airborne early warning and control (AEW) E-2D “Hawkeye” planes, augmenting the already existing fleet of 13 aircraft (the total number will reach 26 planes). The JASDF’s heavy-lift capability will also significantly increase in the upcoming years with the gradual build-up of its locally assembled Kawasaki C-2 heavy transport fleet; three of the airplanes are already in service, with a further 17 on order.

In 2009, the Japan Maritime Self-Defense Forces (JMSDF) commissioned the first of two Hyūga-class helicopter destroyers (helicopter carriers), that became the largest ships built for the Japanese navy since the end of World War II. These were followed by the even larger ships of the Izumo-class (Izumo and Kaga, commissioned in 2015 and 2017 respectively). Although, officially, the ships are referred to as littoral escort ships/destroyers by the JMSDF, their characteristics, capabilities, and size are similar to ASW carriers (anti-submarine warfare carriers). While the Japanese officials maintain that the four ships’ primary role is to defend Japanese territorial waters and assist in humanitarian/disaster relief missions, the abilities of the carriers, especially those of the Izumo-class, allow their participation in a much wider variety of missions. Last December, the Japanese government approved the conversion of the Izumo-class warships into aircraft carriers capable of operating the F-35B, while redesignating the Izumo-class ships to multi-purpose operation destroyers. The new ASW carrier force is not the only sign of Japan’s increasing naval potential. The JMSDF’s advanced submarine force is also steadily growing. Its most recent unit, JS Ōryū, the Force’s first submarine powered by lithium-ion batteries, was launched in October 2018. Similarly, the 2018 establishment of Japan’s first marine unit since the end of the war, the Amphibious Rapid Deployment Brigade, also signals that Tōkyō aims to create a mixed force that is capable of conducting fast amphibious landings in order to retake territories occupied by adversaries—should the need arise. 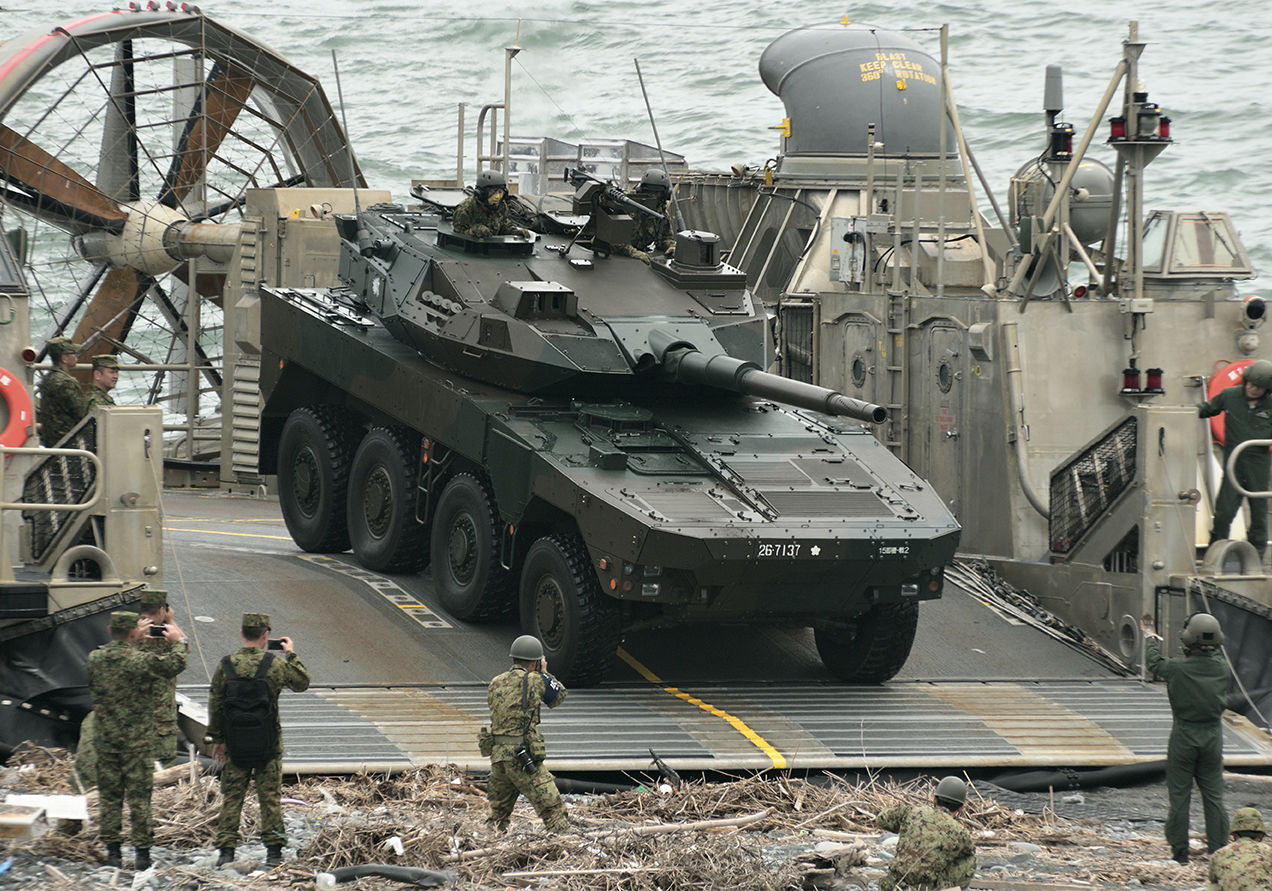 Parallel to the amphibious brigade, the SDF initiated the formation of new units called rapid deployment regiments (RDRs) within the structure of the Japan Ground Defense Forces (JGSDF). These units aim to exploit the additional mobility of new vehicles that were already designed in accordance with Japan’s new military strategic priorities in mind. The domestically developed new 8×8-wheeled Type 16 mobile combat vehicle (MCV) and the Type 10 “Hitomaru” main battle tank (MBT) are prime examples of this, as both symbolise the shift within the JGSDF from a massive but sluggish MBT and artillery force to a smaller but more mobile force. A change that saw the reduction of heavy armour and howitzers in the force from 700 and 600 to 300-300 MBTs and howitzers respectively. Due to its weight, the Type 10’s predecessor, the Type 90 MBT, was deployed only in Hokkaidō, as a large number of roads and bridges were impassable for it. In contrast, the highly automated Type 10 is operated by a three-person crew, and its reduced weight—with a mass of 44 tonnes, it is much lighter than contemporary MBTs—allows it to pass 84% of Japan’s bridges, making its nationwide deployment far easier.

Over the last decade, the JSDF has witnessed a gradual shift in the priorities that were originally set out for it during the rearmament of Japan at the height of the Cold War. The rapidly changing security environment in the East Asian region led to the rethinking of Japanese military procurement and modernisation priorities. The exact future specifics of the Japanese defence capacity enhancement remain to be seen; however, it is already clear that with its boosted naval capabilities, integrated rapid reaction and maritime expeditionary forces, and downgraded heavy army equipment the JSDF is becoming a much more flexible military than it had been in the past 65 years of its existence.

IN FOCUS: Japan—The Legacy of the Heisei Era (English edition) is coming!

You can also find this piece in the next issue of IN FOCUS magazine, due at the end of October, which aims to provide a comprehensive account of Japan’s contemporary political, economic, social and cultural life, with a special focus on the symbolic difference between Emperor Akihito, who resigned in April, and Emperor Naruhito, who ascended the throne in May. The publication will examine Japan in the Heisei Era, while presenting the country’s current security policy challenges and the characteristics of its international relations.

In Focus Japan—The Legacy of the Heisei Era