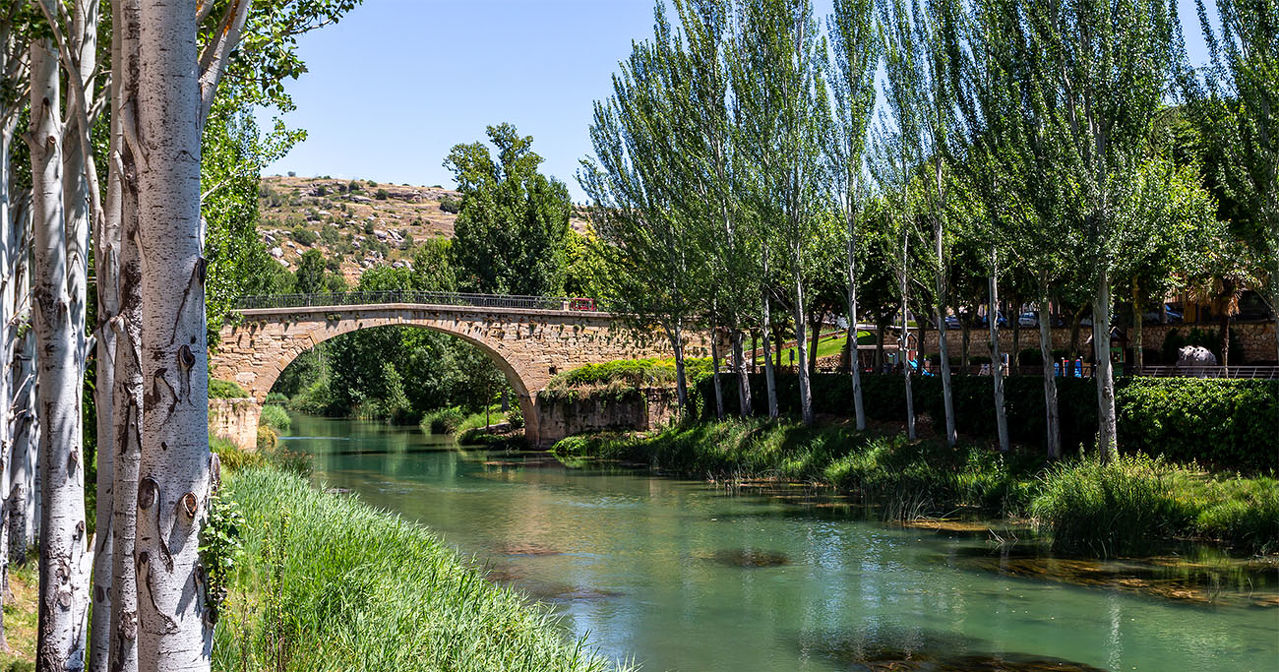 Water shortages in Spain have increasingly hit headlines in recent years. Despite its previous attempts to reach formal agreements, Spain has been fighting for water resources internationally; however, water sharing has long been an acute problem domestically, as well. A shining example is the debate over the water rights of the Tagus River in the provinces of Andalusia and Murcia, which has intensified in the last months. The conflict pits diverse social groups, parties, and complete regions against each other within and beyond borders.

The more than thousand-kilometre Tagus is the longest river on the Iberian Peninsula. It originates in Spain, in the Iberian Mountains, and flows into the Atlantic Ocean at Lisbon. Its catchment area covers approximately 81,000 square kilometres—almost the territory of Hungary. The problems with the river start almost at its source, as a significant part of its water is diverted to southern Spain to irrigate agricultural land there. The aim of this system, planned at the beginning of the 20th century, was to transfer a certain proportion of the Tagus’s discharge to the Segura River, thus irrigating the drier farms exposed to the arid climate.

However, this solution from the last century is no longer viable today. During the planning process in 1902, experts calculated on a significantly higher available water flow. Additionally, the increasingly severe droughts that regularly affect the region (including the headwater region of the Tagus) did not figure among considerations during earlier strategic planning.

In the meantime, irrigation farming began to develop in the Iberian country in the 1980s: officially, there are now 3.8 million hectares of irrigated land in Spain, with agricultural water accounting for about 80% of national water consumption. (By comparison, Hungary’s total agricultural area covers 5.3 million hectares.) The irrigation concept developed in 1979 and still in place was based on hydrological criteria which allowed 1,000 cubic hectometres of water per year to be transferred to the southern areas. One of the conditions laid down is that the average annual water flow at the river’s headwater area should reach 1,400 cubic hectometres. Experts calculated this amount of water based on the average annual water flow measured between 1912 and the planning of the irrigation concept—a period which showed a more or less regular change in the river levels. Today, however, this condition is not met anymore: the average discharge of the river has fallen by an astonishing rate of nearly 47% since the 1980s.

A decree issued in 2014 regulated the amount that could be transferred from the Tagus’s catchment area to the Segura River. The transfer depended on the water flow of the Tagus’s headwater area. However, the amount used to be only an option but not the one and only guarantee of the basic irrigation-water supply to the southern areas, as it is today. The troubles with the Tagus do not end at this point, as the river also has to supply the more than six million inhabitants of Madrid, while the capital’s inadequately or barely treated waste water is also discharged into it. Besides, the Tagus’s water is also used to cool the condensers in the units of nuclear power plants in Spain.

Finally, the government in Madrid decided this year to limit the amount of water to be transferred to the southern provinces. At the end of July 2021, the decision to reduce the amount of water from the Tagus to the Segura was formally enacted. The new measures mean that the amount of water entering Murcia and Andalusia provinces and supplying agricultural areas with irrigation water has been significantly reduced. Provincial presidents argue that the decision was not preceded by any dialogue and, most importantly, causes significant losses to local farmers. However, according to the ministry of agriculture, the measure was unavoidable, as “the total water flow of the Tajo has decreased by 12% since the 1980s.” 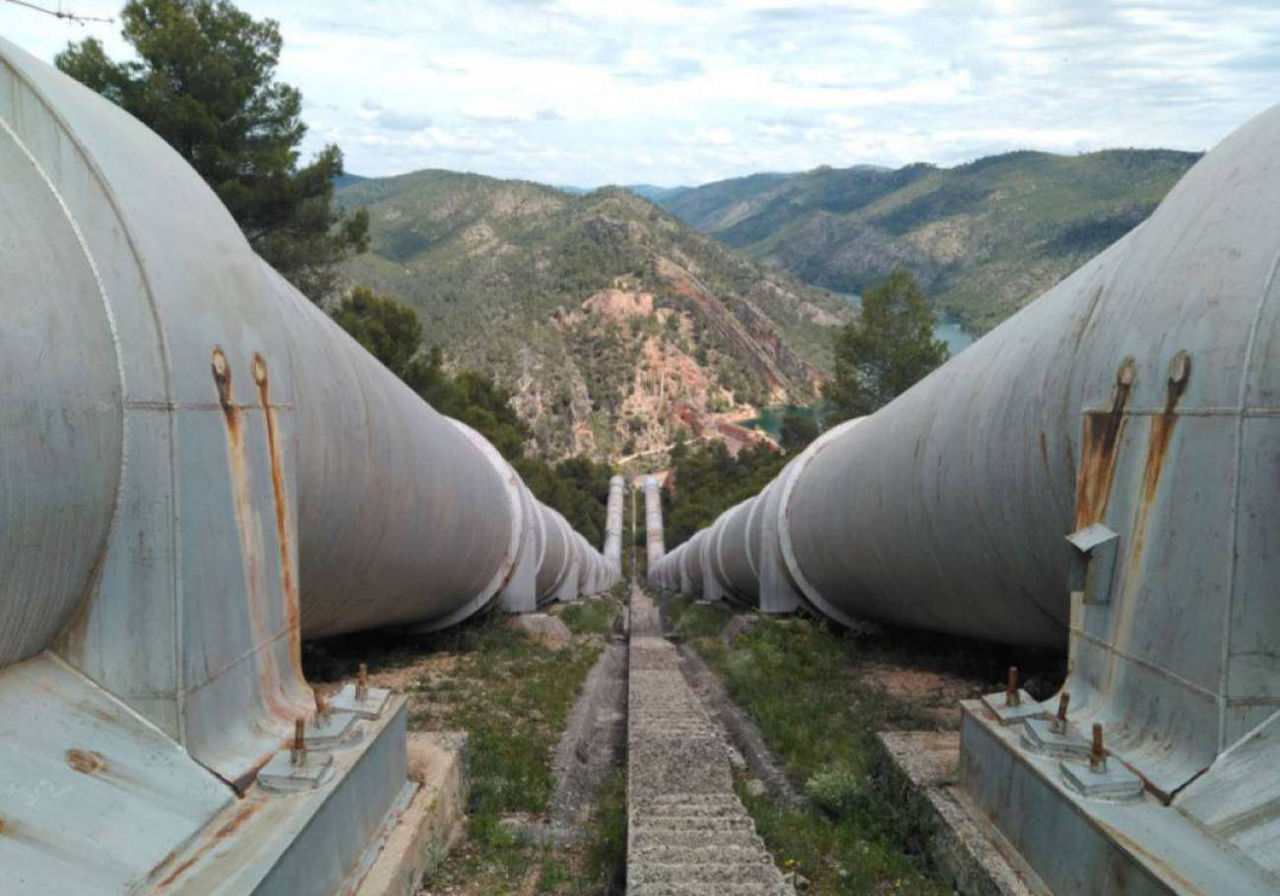 A significant percentage of the Tagus’s water was directed to the Segura River for several years.
Source: Cadena SER, used under a licence from the radio station

Over the span of decades, the interprovincial water dispute in the country had no satisfying solution for all parties, and the irrigation-water needs of the southern provinces have not been met, either. No wonder, as the starting points in the debate are quite distant. In the ongoing “war of numbers,” the disadvantaged provinces, Andalusia and Murcia, expect that water entering the Segura River will be reduced by eighty cubic hectometres. According to the secretary general of The National Federation of Irrigators Communities, or Fenacore, the reduced amount of water coming to southern provinces could lead to a 25% unemployment rate in the agricultural sector. On the other hand, the Ministry of Ecological Transition and Demographic Challenge predicts a thirteen-cubic-hectometre annual loss, citing a report by the Spanish National Public Works Research Centre.

Following Italy, Spain will receive the largest share of the budget of the European Union’s Recovery and Resilience Instrument (RRF) for the period 2021–2026. The Spanish recovery plan approved by the European Commission is planning to allocate 40% of the EUR 140 billion aid on measures to mitigate the negative effects of climate change. The Association of Andalusian Irrigation Communities (Feragua) has identified forty-seven agricultural projects in the region that could benefit from the RRF fund managed by the Ministry of Agriculture: twenty of them would be irrigation development projects, eight would implement basin irrigation, seventeen would promote renewable energies, and, thus, (only) two projects would endorse alternative water resources (one of them would be a seawater desalination project).

Since the beginning of this year, Fernando López Miras, the president of Murcia, has several times called for an appropriate allocation of European financial resources, considering the “special importance” of the region’s agriculture. The province presented fifty-eight energy-efficiency and water-use projects that expect RFF assistance. By “special importance,” President Miras refers to the fact that the region has a more than 10% contribution to the Spanish agri-food sector’s exports. No wonder that the leaders of the province are concerned that the competitiveness and strength of the local agriculture will be affected by the negative effects of the modified water-sharing policy.

A network of desalination plants installed in Spain in recent years might offer a partial solution for the drought-stricken Spanish areas. The first desalination plants in the country were put into operation in the Canary Islands as early as the 1960s and, later, expanded into the coastal areas to strengthen the supply of water-scarce areas. Spain produces nearly three million cubic metres of desalinated water per day, of which more than 80% is produced by only fifty plants on the Mediterranean coast and the Canary Islands. Andalusia accounts for 25% and Murcia for 20% of this production volume.

According to Teresa Ribera, Minister for Ecological Transition and Demographic Challenge, the Spanish recovery plan accepted by the European Commission is committed to investing in doubling the system’s desalinated-water-production capacity, thus compensating the farmers left without irrigation water from the Tagus. The fly in the ointment is the vast energy consumption of the desalination process. Therefore, the government is also planning to invest in photovoltaic power stations to cover a significant part of the process’s energy needs.

Spain also has problems with its watercourses beyond its borders, the Tagus being no exception to this rule. The country and the neighbouring Portugal share five main river basins; the total area of these accounts for 45% of the Iberian Peninsula and almost 64% of the Portuguese territory. Among the five major rivers, the Tagus has the third-largest catchment basin, forming a kind of dividing line between the wetter northern and drier southern areas of the peninsula. Both capitals, Madrid and Lisbon, are located in the Tagus’s catchment area.

The different climatic conditions within Spain and Portugal further exacerbate water stress and distribution problems. Traditionally, both countries focussed on dam construction and large-scale water transfers between their regions. (In addition to the above-mentioned transfer from the Tagus to the Segura, another striking example is feeding the water of the Guadiana River into the Sado, Odiel, and Piedras river basins.) 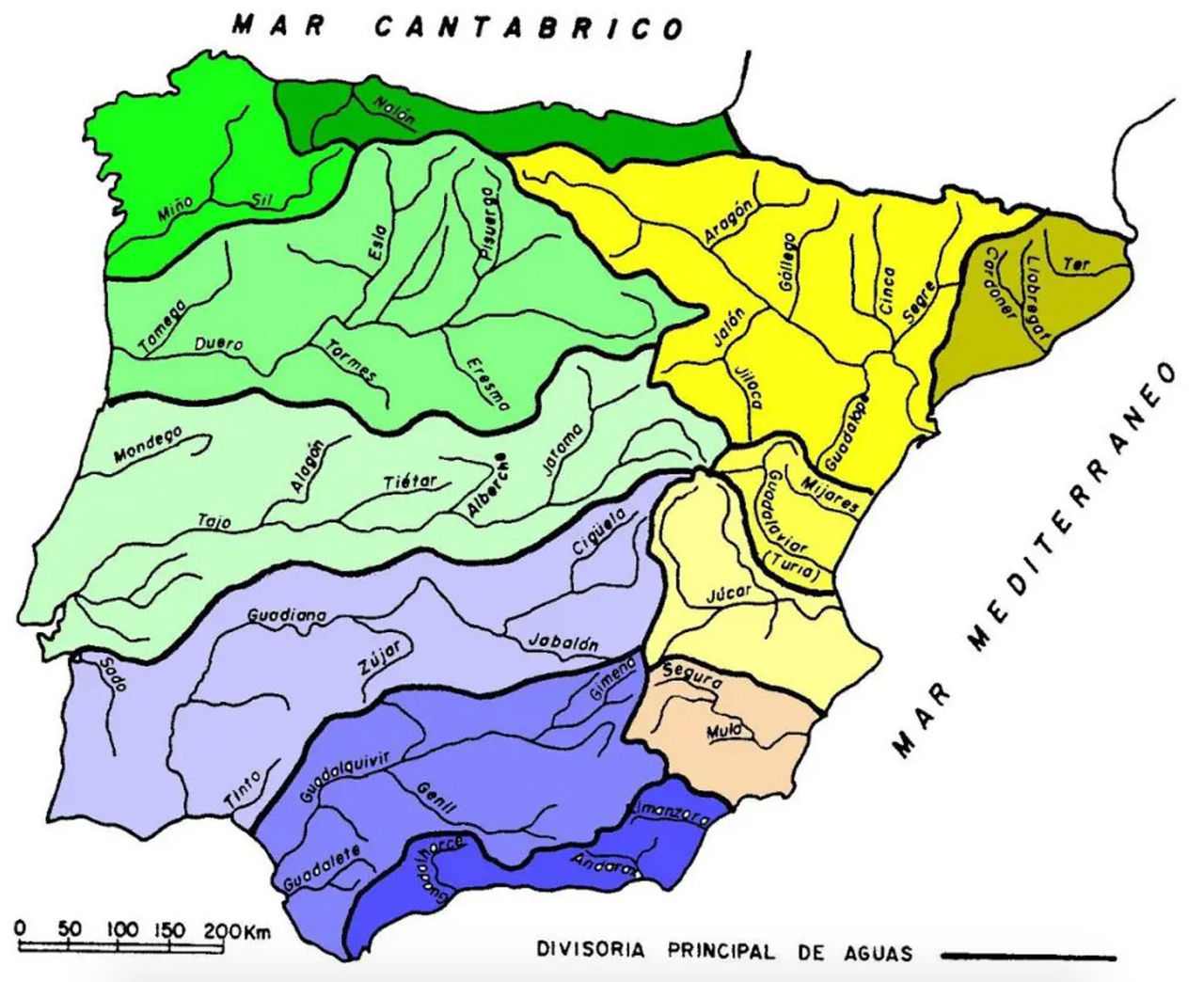 Spain and Portugal share five major river basins: the ones belonging to the Miño, the Limia, the Duero, the Tajo (Tagus), and the Guadiana
Source: Meterología en Red, licence: CC BY-NC-SA 2.5 ES

Spain and Portugal signed the Albufeira Convention on transboundary water distribution in 1998, amending the former regime. Regarding the Tagus, the agreement is unfavourable for Portugal, but the Portuguese government was willing to make concessions to Spain so that it could implement the Alqueva reservoir project on the Guadiana River in return. The Alqueva lake has the largest dam on the peninsula, and its reservoir has the second-largest storage capacity in Europe.

The Tagus has no less than fifty dams on Spanish territory. Due to erroneously assessing the annual water flow and ignoring the cyclical droughts in Spain, these constructions have turned the Tagus into one of the rivers in the worst ecological condition on the peninsula. Portugal estimates that, due to the above-mentioned human interventions, the average discharge at the estuary of the river is 30-50% lower than it would be without dams and water transfers.

Lisbon is also concerned about the radioactive contamination from the Almaraz nuclear power plant near the border. Madrid did not want to react to these worries in substance and argue that “Almaraz is more than 100 kilometres from the nearest Portuguese watercourse.”

The measures adopted should strike a balance between economic, social, and environmental interests, so the Spanish Government is in a quite difficult position. It seems that, in the case of the Tajo, technological and political considerations prevail over solidarity between the various regions.

The opening pic is by Marta Fernandez Jimenez/Shutterstock

The Water Grid and Beyond
Read more