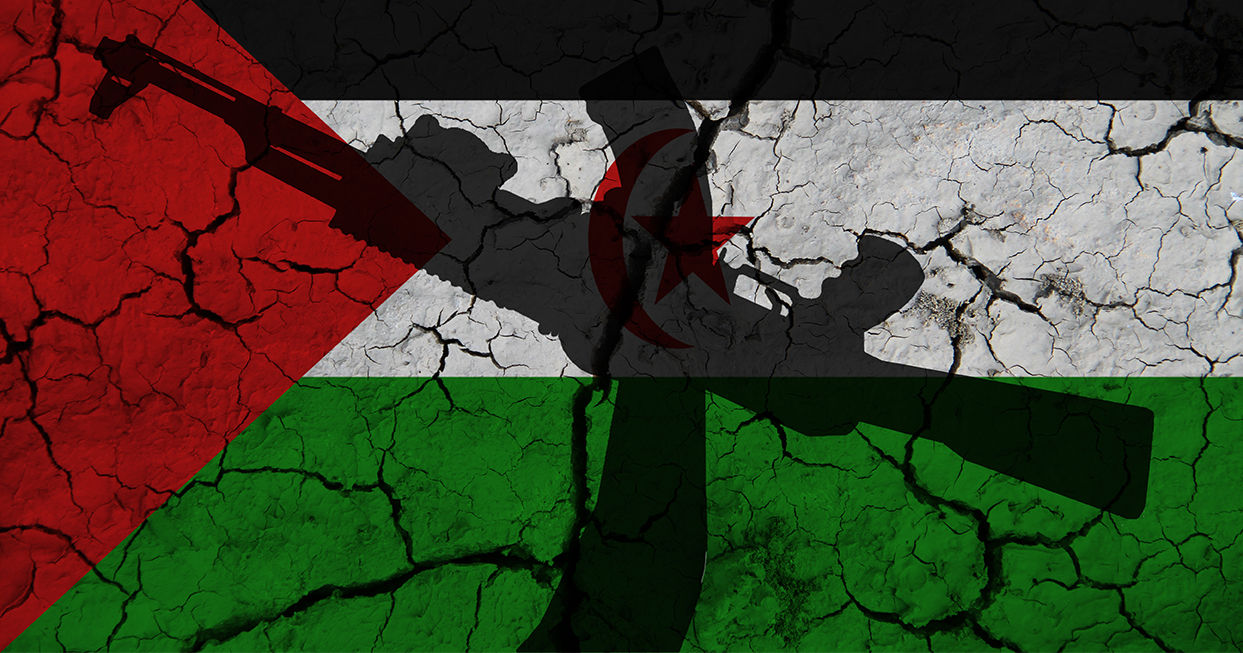 The Endgame of Africa's Last Colony?

The Polisario Front's Decades-Long Struggle for an Independent Western Sahara

Nearly thirty years of ceasefire suddenly came to nothing in North-West Africa when, on 13 November, Morocco announced that it would put an end to the Western Saharan issue. The Polisario Front, which has for decades been fighting for the independence of Africa’s last colony, stated that they would take up the gauntlet, no matter the cost. At first, Rabat’s move seems “well-timed” because, nowadays, the world is busy with other issues. However, the possible outcome is a horse of another colour. Can Mohammed VI succeed where none of his predecessors could? What is the history of the independence fight in Africa’s last colony? What lessons can the previous episodes of this war teach us?

The 267,000 km2 Western Sahara is bordered by the Atlantic Ocean to the west, Morocco to the north, Algeria to the north-east, and Mauritania to the south and east. It is an area mostly covered by stone desert that has low water supplies and raw materials. The main source of income is fishing and tourism, but, in every other way, the area is exposed to imports, the goodwill of the Moroccan authorities, and foreign aids. Although the area is rich in phosphate—if the Moroccan territories are included, then it holds more than 72% of all phosphate rock reserves in the world—the extraction remains expensive thanks to poor infrastructure. And, of course, no foreign company can legally mine in the region due to territorial disputes.

The low population density area is inhabited by over half a million people, but the exact number is not easy to define, because most of the locals live a nomadic life, constantly migrating among surrounding countries. The largest city and the unofficial capital is El Aaiún (called Laâyoune in French). Nearly half of the population are the native, Berber-speaking people, whose member calls themselves Saharawi, which means “inhabitant of the desert.” However, the major ethnic group is Moor, mainly from Mauritania. There are also Moroccans who came to the land as settlers. While the country is very heterogeneous ethnically, it is homogenous from a religious aspect: everyone is Muslim and belongs to the Sunni branch of Islam, following the Maliki school teachings. 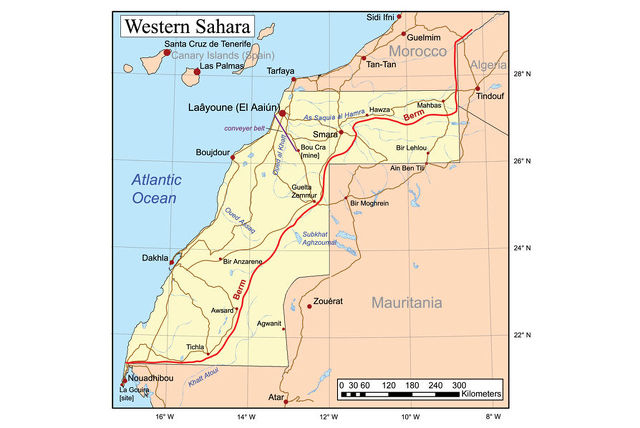 Western Sahara has a very turbulent history. The region was acquired by Spain in 1884 and was named Rio de Oro (Golden River). However, the Spanish supremacy did not last long, because the locals—who sometimes got some assistance from France, one of Spain’s main rivals—always rebelled against the colonial power right from the start. Moreover, the Iberian kingdom put up for sale some of its colonies to cover its losses after the Spanish–American War in 1898. In 1899, the Austro-Hungarian Empire checked in for Western Sahara: it almost managed to buy the colony to exploit the fish-rich coastline, but, in the end, the business fell through due to slow bureaucracy, the lack of interest among politicians, and the French intervention.

Although West Sahara remained Spanish territory, even the Franco dictatorship could not keep it under full control, and clashes between Saharawis and the Spanish Legion remained an everyday event. Moreover, Morocco tried to take over the territory in the so-called Ifni War less than two years after it had become independent in 1956; however, the Spanish forces successfully repelled its troops. However, the war showed that Madrid could not maintain its rule forever. The area kept on incurring losses to the country even though the largest phosphate rock reserves were discovered after the armed conflict.

As in neighbouring Algeria in the mid-1950s, an anti-colonialist movement formed in 1973: the Polisario Front (its full name in Spanish is Frente Popular para la Liberación de Saguía El-Hamra y Río de Oro, meaning the Popular Front for the Liberation of Saguía, El-Hamra, and Río de Oro). The group was founded in the Mauritanian city of Zouérat by Western Saharian students who were led by El-Ouali Mustapha. First, it was small, and it had little support among the locals and from abroad. However, after its first successful attack on a Spanish outpost in al-Khanga in May 1973, it gradually gained control over a large part of the desert countryside. Many Spanish soldiers with Berber and Moor origins deserted to the Polisario Front, bringing weapons and training with them. In the end, yielding to internal and external pressure, Madrid announced that it would withdraw its forces and hold an independence referendum.

However, the locals could not enjoy their “freedom” for a long time. The Spanish soldiers were still there when Mauritania and Morocco—two of the Polisario Front’s biggest supporters outside Algeria—decided to invade, divide, and annex Western Sahara. Hassan II, the Moroccan king at the time, committed himself to occupying the region to create “Greater Morocco” and to balance its internal, nationalist opponents. On 6 November 1975, the monarch—with the blessing of the United States and France—launched the so-called Green March: covered by 25,000 soldiers, 350,000 Moroccan civilians with the Quran in one hand and with a green flag, the symbol of Islam, in the other, “marched” into northern Western Sahara. After Franco’s death, Spain was too busy with its own transition of power, so Madrid did not aid Polisario Front—which, putting aside the decades-long hostility, eventually sought help from the Iberian country. On 14 November, the participants signed the Madrid Accords. This transferred the administrative control of the territory to Mauritania and Morocco and set the date of Spanish withdrawal (the last Spanish soldier left the region on 26 February 1976). Rabat received El Aaiún and Semara, as well as the most important phosphate reserves, while Nouakchott, the capital of Mauritania, had to settle for the fish-rich coastal area, some smaller settlements, and the desert.

The Polisario Front’s leaders fled to Algeria and formed an émigré government. Thousands of Saharawis followed them: at the beginning of 1976, more than 100,000 refugees lived in Algerian refugee camps. Since these sites were often targeted by the Moroccan Army, Algiers started to support the Polisario Front with weapons. The freedom fighters, thanks to their familiarity with the terrain and knowledge of guerrilla war tactics, could achieve many victories and cause serious damages to the invaders. Encouraged by the small success, they declared the birth of Saharawi Arab Democratic Republic (SADR) on 20 May 1976. Two weeks later, the new republic was able to carry out a surprise attack on Mauritania’s capital. Although El-Ouali died during the campaign, his sacrifice was not in vain: in panic, Ould Daddah, the president of Mauritania, passed stricter laws, increased taxes, and reorganised the military—in the end, all these measures paved the way for a military coup, which happened two years later. In 1979, the new Mauritanian leadership signed a peace treaty with the Polisario Front, recognised the SADR, and withdrew all its territorial claims in the region.

Hassan II and his government were surprised by the events, but immediately claimed the whole of Western Sahara, and the Moroccan Army occupied Mauritania’s former territories in August 1979. However, despite the American, French, and Saudi military support, the invaders could not effectively control every part of the country. That is why Rabat changed its former strategy radically: it built the “Moroccan Western Sahara Wall” (berm), which is 2,700 km long, consists of 300 different strongholds, and is guarded by nearly 180,000 Moroccan soldiers. After seven years, the defence line was complete, and the fighting diminished greatly—but mortar attacks and minor clashes still broke out throughout the1980s.

After the fall of oil prices in 1986, Algeria faced serious economic challenges and uprisings, which led to the reduction of its support. Polisario Front’s attacks proved less and less successful, and they could not break through the berm at any point. Simultaneously, differences between the “old guard” and the younger generation have arisen, as not everyone wanted to achieve freedom with guns. Due to criticism over the colonisation of Western Sahara, Rabat left the Organisation of African Unity (later called African Union) in 1984. Morocco deteriorated its relations with many African countries and almost started a war with Algeria. At the same time, the Moroccan king had to deal with growing economic and social problems, bread riots, while radical Islamism also began to spread in the North African country. In August 1991, the Moroccan Army started its last military campaign to secure the southern and western territories behind the Moroccan Wall, but it failed. In the end, both sides accepted the UN mediation: a ceasefire between Morocco and the Polisario Front has come into effect on 6 September 1991. Until today, the truce has been monitored by the MINURSO, a UN peacekeeping mission, in which 228 civilians and soldiers serve even these days. 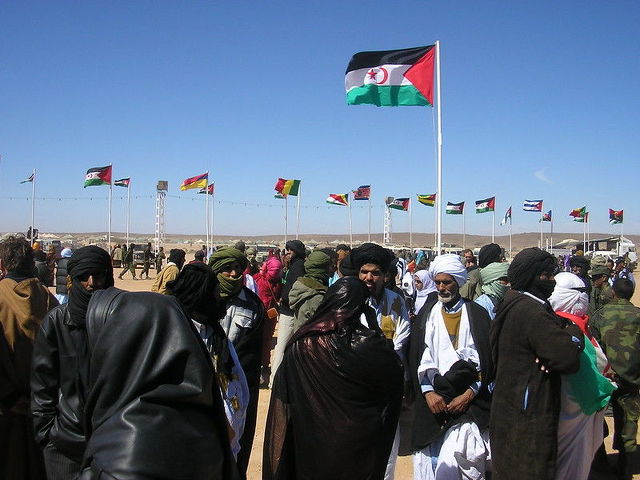 This agreement meant not only the end of the war but also the promise of an independence referendum in which locals could decide how they want to live: as a part of Morocco or, rather, as citizens of Western Sahara. However, the referendum has not been held until today. For example, it is still a question who should vote: can Moroccan settlers participate in the elections just as Saharawi refugees in Algerian refugee camps? Both sides tried to answer this and other remaining questions—for example, in 2007, when Polisario promised immunity to Moroccans and Rabat offered autonomy for the locals. However, problems have remained unsolved because tensions have always erupted. Moreover, thanks to the “Arab Spring,” younger generations of Saharawis stood up for independence and clashed with the Moroccan authorities. Nevertheless, moderate factions and the UN could prevent the conflict from escalation. At least so far: at the end of this October, 200 Moroccan truck drivers from Mauritania stuck on the desert border near the village Guerguerat because Polisario Front militants did not let them pass into the Morocco-controlled areas. Rabat, at first, responded by mobilising and increasing the number of troops in the region, but, on 13 November, it launched an extensive campaign across the berm. It seems like the fighting continues just where both sides stopped twenty-nine years ago. But will the outcome of the conflict be the same as many times before, or will this be the endgame of Africa’s last colony?