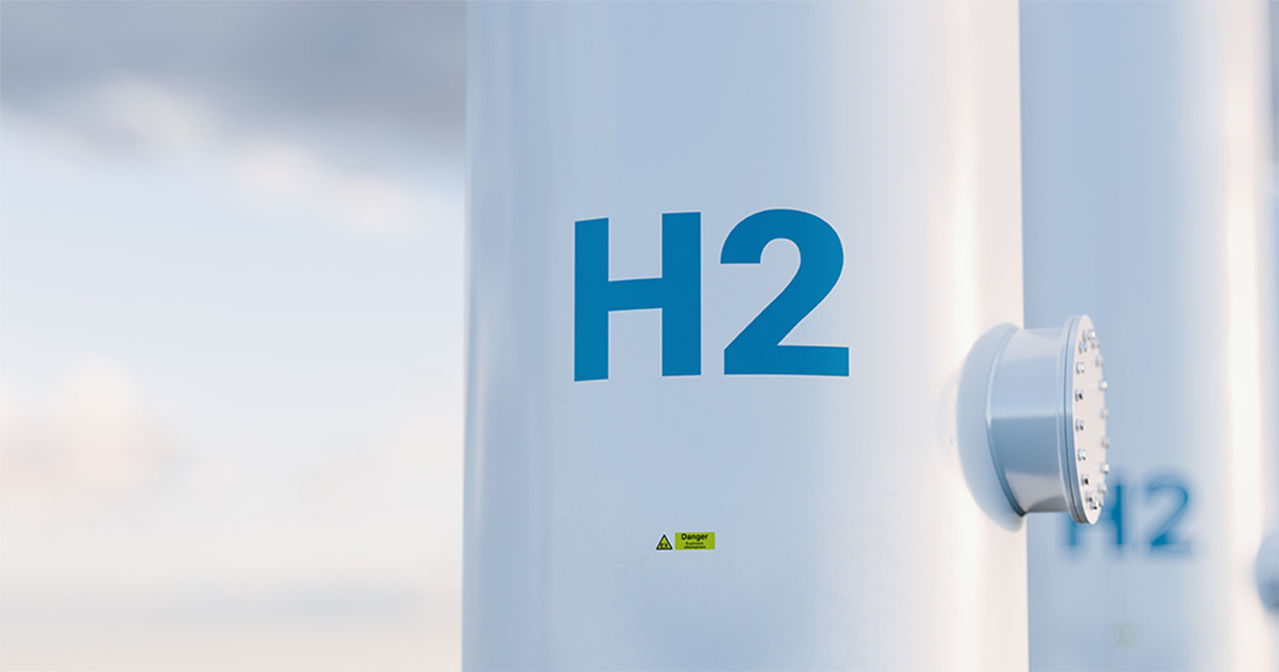 In the shadow of the coronavirus pandemic, decision-making bodies of the European Union continue to focus on environmental and social priorities alongside economic recovery. Until now, the hydrogen strategy developed by the European Commission in 2020 appeared to be a direct route to achieving the climate neutrality goals defined in the European Green Deal. However, this scenario was contradicted by a communication from the commission in February this year. According to the document, gas-fired electric and thermal power plants will continue to receive EU subsidies. The document sparked heated debates and raised many questions about whether or not the plan to fund gas-based projects is in line with the principles of the European Green Deal.

“Gray spots” on the green agreement

To address global climate challenges, the European Commission published a communication in 2019 titled “The European Green Deal.” One of the main goals of the ambitious strategic plan is to make the EU the first in the world to become completely climate neutral. To achieve this, member states have to gradually reduce greenhouse gas emissions from burning fossil fuels by 2050. Another document published in January this year—which aims to develop cross-border energy networks, including hydrogen storage solutions—reaffirmed the intention of the European Commission to become carbon neutral. The commission’s original proposal focused on updating regulations, building new energy storage technologies and smart grids, and urging the exclusion of fossil fuels from state aid. The proposal also suggested that natural gas projects would no longer be eligible for Projects of Common Interest (PCIs) status. So at first, the European Commission set “strict rules of the game.” However, the updated version of the document continues to list smart gas grids among those projects eligible for PCI status.

The initially very drastic ideas about carbon neutralisation were further nuanced by another communication from the European Commission, adopted following the plenary session of the European Parliament in February. This document also supports the scenario that natural gas will continue to play a significant role in the European energy system. According to the communication, the Next Generation EU—a temporary instrument to boost recovery—will continue to support natural gas projects under certain conditions. The EUR 672.5 billion provided under the Recovery and Resilience Facility (RFF), a key element of the Next Generation EU, can also finance natural gas projects aimed at the transition to clean energy. Gas-fired electric and thermal power plants are eligible for RFF funding if greenhouse gas emissions of their infrastructure do not exceed 250 g/kWh during their lifetime. Projects are also eligible if they coincide with the decommissioning of “significantly more carbon-intensive” installations, and member states provide a credible plan for the pace of achieving the 2030 renewable energy targets. Overall, investments that are subject to the “lesser of two evils” principle are eligible. The decision could favour natural gas projects and call into question the provisions of the green agreement. The newly developed energy lending policy of the European Investment Bank (EIB) also contradicts the communication, as it assumes that after 2021 the EIB will only be able to finance projects requiring fossil fuels in exceptional cases.

Critics of natural gas note that the above exceptions defeat ideas based on using the least polluting alternative. Accordingly, the impact of new investments should be considered in absolute terms, using the best available technology (BAT) rather than to compare a less harmful option with an outdated, more polluting technology. The same applies to newer gas-fired power plants. Instead of coal-fired power stations, their impacts should be compared to solar and wind power plants, which are much more environmentally friendly and technologically and economically feasible alternatives.

According to a statement last year from Florian Ermacora, head of unit at the European Commission’s Directorate-General for Energy, natural gas would continue to be needed as additional capacity alongside electricity generation to meet the EU’s energy needs until the 2050 targets agreed in the green deal. Although continuous development of batteries will drive grid balancing, it is unlikely that a natural supply balance can be maintained without sufficient gas reserves. Many share the view that nuclear power can only provide baseload power, so natural gas is essential to meet additional demand. Although it may seem contradictory, natural gas is a necessary step on the road to carbon neutrality. However, in addition to natural gas, hydrogen also plays an important role in achieving the 2050 targets set out in “The European Green Deal.”

Hydrogen, the first element of the periodic table, is a colorless gas under standard conditions but has recently been described as a particularly “colorful” element. It has come into focus not only as an energy carrier but also as an efficient energy storage device. Green hydrogen is produced when water is decomposed by electric current during electrolysis. The H2 molecule produced in the electrochemical reaction is called “green” because the electric current used to decompose the water comes from a carbon-free source. A distinction is also made between blue and gray hydrogen, which can be produced from natural gas and coal. Blue hydrogen is a much more environmentally friendly solution, as the carbon dioxide produced is injected back under the earth’s surface, resulting in fewer carbon dioxide emissions. The latter process can roughly halve the amount of carbon dioxide emitted but is still far from carbon neutrality. The cost of producing hydrogen depends, among other things, on the price of electric current and natural gas. 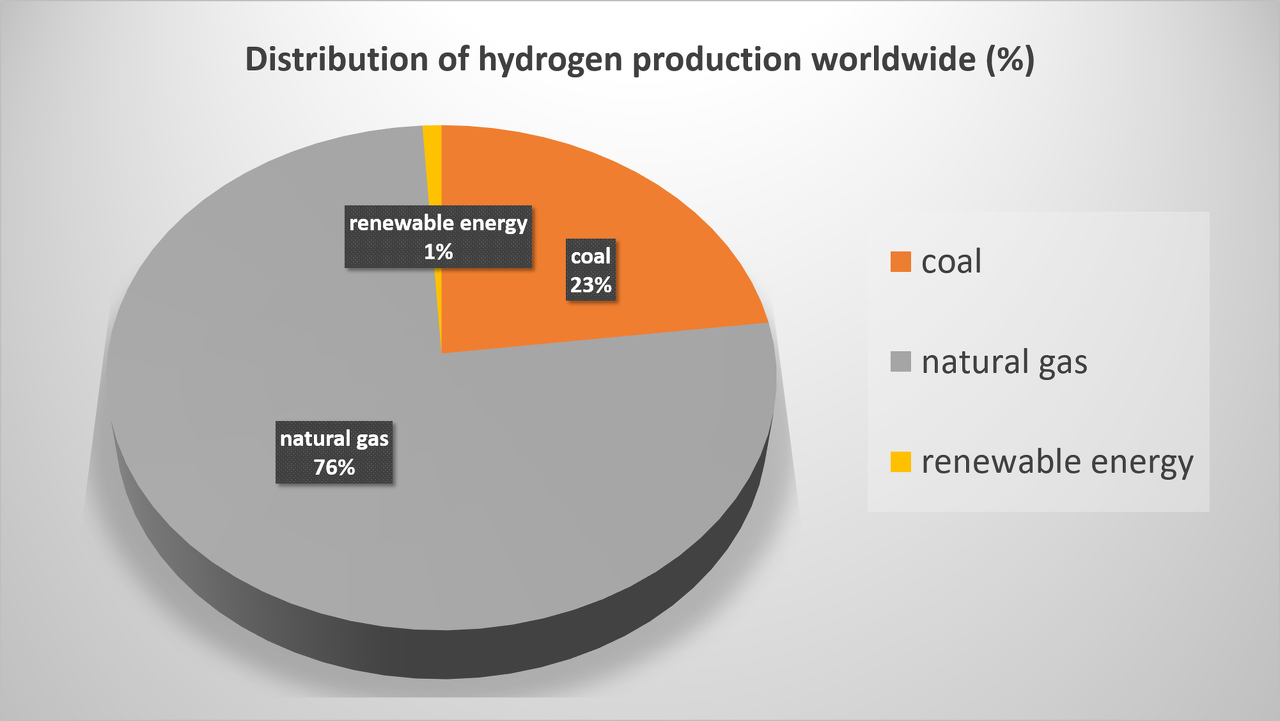 99% of current H2 production is based on natural gas and coal.
Source: KPMG

Indeed, the potential of hydrogen is promising from an environmental point of view, especially in the field of electric power storage from renewable sources. Energy storage with hydrogen can also be a solution in areas where the use of batteries is suboptimal. It can be used in combination with natural gas or in the presence of an appropriate infrastructure to supply heat to houses and apartments in domestic energy consumption.

Of course, there are some counterarguments as well. Hydrogen is a highly flammable substance with an energy density of only about a quarter of gasoline, so the biggest challenge is finding an efficient and safe way to store and transport it. To compensate for the extremely low energy density, larger volume pipes and tanks are needed. Since hydrogen makes many metals, such as steel or aluminium brittle, the equipment needed to transport and store hydrogen has to be made of unique material. Therefore, building a hydrogen-related infrastructure is very costly. Another disadvantage is that the conversion of electrically produced hydrogen into electrical energy is also energy intensive. The process involves high energy losses, so the efficiency of the entire storage cycle is very low: less than 30%, according to the International Energy Agency. The success of hydrogen from renewable sources also depends on future technological conditions, such as changes in the price of electrolysis equipment needed to produce green hydrogen or possible improvements in the efficiency of electrolysis. In addition, sufficient use of the newly created hydrogen infrastructure would require an abundant supply of electric power from renewable energy sources. However, without a significant acceleration of renewable electricity generation, the EU will have to continue to rely on gray and blue hydrogen. In addition to the current trends, there is a chance that solutions intended to be temporary until green hydrogen becomes widespread will be permanent in the long run.

According to a study published in February 2021 by the international environmental and human rights organisation, Global Witness, the EU has spent EUR 440 million on seven natural gas pipeline projects in the last nearly ten years alone that have since been halted or are unlikely to continue. A substantial part of this sum was spent on the BRUA Gas Pipeline, which connects Bulgaria, Romania, Hungary, and Austria. In total, around EUR 5 billion was spent on 41 different gas infrastructure projects. 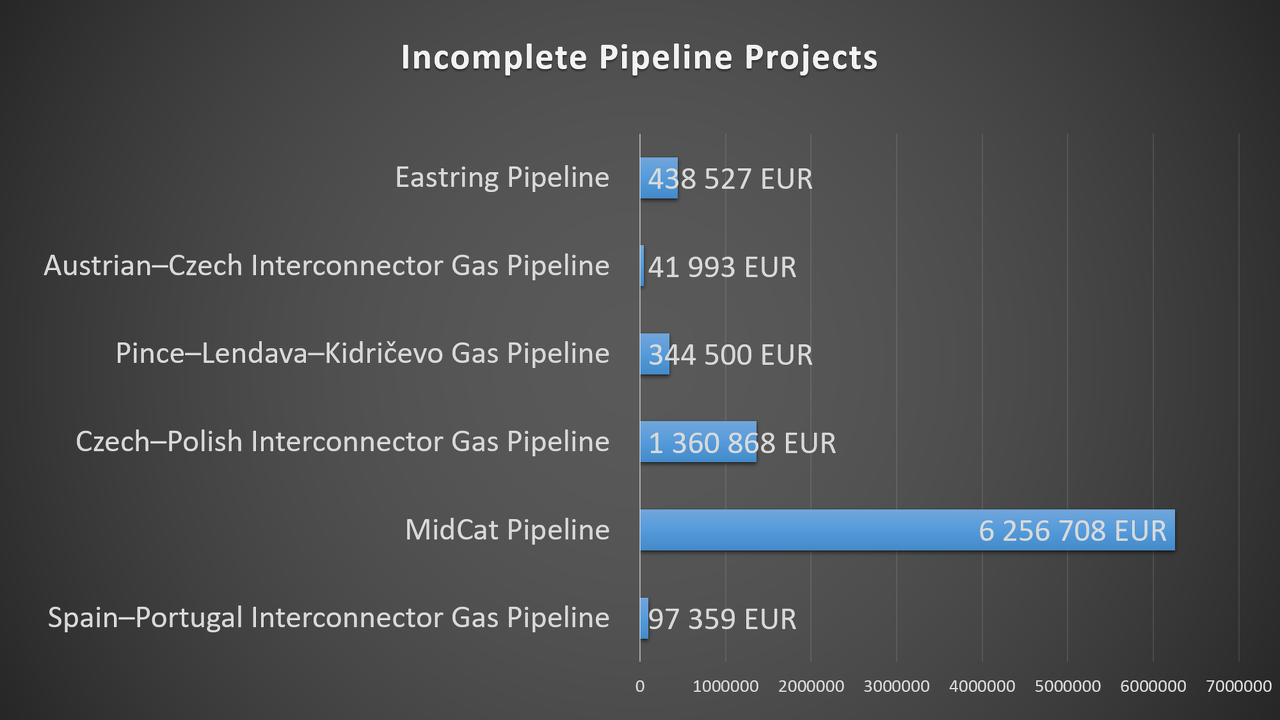 In order to support the balanced use of hydrogen, a communication from the European Commission has set the optimal level of investment in electrolysers in 2020 at between EUR 24 and 42 billion. A further EUR 65 billion is estimated for transport, distribution, and storage. According to the European Commission, the roadmap “2×40 GW” envisages the development of 40 GW of renewable hydrogen electrolysis capacity in the EU by 2030 and expects another 40 GW through investments in Ukraine and North Africa. Such an integrated hydrogen market would have the same goal as most European energy efforts: reducing dependence on Russian gas imports.

However, decoupling the EU’s energy supply from natural gas is a fundamental contradiction. Gas infrastructure development projects are recommended to the European Commission by the European Network of Transmission System Operators for Gas (ENTSOG). The central role of its body in decision-making raises doubts in itself. Add to this the fact that the commission’s updated proposal for an EU hydrogen strategy provides, as a kind of loophole, the possibility for smart gas networks to be eligible for PCI status. It is no coincidence that Jonathan Gant, a senior gas campaigner at Global Witness, said that “the Commission’s proposal fails to tackle the fundamental conflict of interest created by leaving ENTSOG in charge of key parts of the project selection process.”

A political consensus to update the guidelines for trans-European energy infrastructure is expected by the end of 2021. As we can see, the competition is in full swing between the energy-producing methods using renewable sources and those using fossil fuels. Taking advantage of the current wave of hype around hydrogen, one of the European Commission’s main goals is to switch to the use of green hydrogen gradually and to proudly wave the victory flag of an almost completely carbon-neutral continent. However, it remains questionable whether there is any real political will behind the implementation of these ambitious plans or not.

The opening pic is by petrmalinak/Shutterstock

What Is That, and Why Does It Matter?
Read more