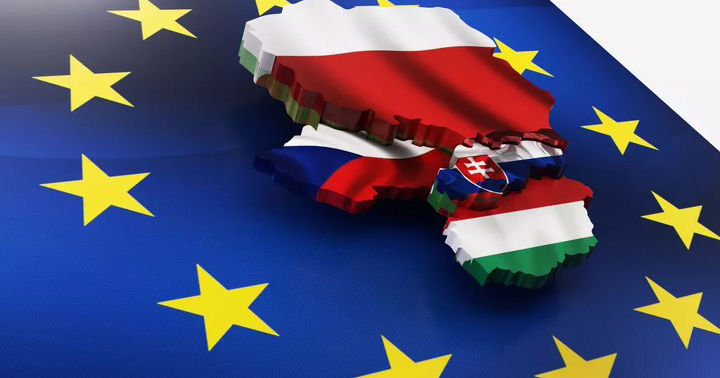 The European Union and the V4

It has been fifteen years since the members of the Visegrad Group joined the European Union. As it is more than the half of the time that has passed since the Treaty on the European Union came into effect, it is time to look back on our past and debate what is ahead of us. As an overture to our conference on 24 October, co-organised by the Wilfried Martens Centre, this post and its first part revolve around this matter.

On 1 May 2004, the four countries of the Visegrad Group (V4), Poland, Czechia, Slovakia, and Hungary, became members of the European Union. With their accession, one of the most important strategic aims of the Visegrad Declaration was fulfilled. However, even after the successful Euro-Atlantic integration, the V4 cooperation remained viable subregional cooperation within the EU framework. My previous article intended to present how the V4 alliance had come to life and what were the main ambitions of the new leaders of Central Europe, while this post is dedicated to discussing how membership shaped the V4 countries and present the main internal and external European challenges that they have to face.

The V4 countries in the EU: a successful coordination of interests?

In the post-accession period, it turned out very soon that the V4 as subregional cooperation remained a necessary instrument to coordinate the interests of the new member states. The V4 has a common position in many internal and external policy fields, as their main priorities are similar even though, when it comes to deepening the European integration, differences are also present. Slovakia, for instance, has long been a eurozone member, while the common European currency is not a priority for the other three countries. Also, the V4 supports the Western Balkans’ EU accession efforts unanimously, but, when it comes to Russia, they are disunited. In addition, there have been harsh political debates between some of the member states and the institutions in recent years, which also clearly shows that there are important differences within the European Union itself. However, as a result of the cooperation of its members, the influence of the Visegrad Group in the EU institutions is more and more recognised and can further increase in the post-Brexit period.

The financial added value of the EU membership

Before their integration, an important expectation of Central and Eastern European member states was that membership would allow them to catch up with Western economies. Indeed, benefiting from the EU’s “four freedom” seemed to be an attractive alternative for the citizens of these countries, especially, as we can find most of the less developed regions in this region. Although the economic crisis hit hard the European Union, the V4 economies have shown signs of recovery since 2010, and this progress could also be observed in the real GDP growth rate over the years.

Poland, Czechia, Slovakia, and Hungary have experienced significant economic development, although there is still a lot do to in important policy fields such as energy security, the north–south interconnection of the region, research and development, not to mention the difficult social and demographic challenges these countries face. However, he European Structural and Investment Funds (ESI Funds) are important investment tools for new member states who try to develop the socio-economic situation of their population further. The ESI funds are built up from five different funds, the European Regional Development Fund and the Cohesion Fund being the most significant ones.

For instance, over the 2014–2020 financial period, a total budget of 29.63 billion euros has been allocated to Hungary so the country invest it in different social and policy areas. The most important funds for the V4 are the European Regional Development Fund (ERDF) and the Cohesion Fund (CF). That is why in March 2017 the Visegrad Group, together with Bulgaria, Croatia, Romania, and Slovenia, released a Joint Paper on the continuing importance of the Cohesion Fund after 2020. In the document, Eastern member states reminded of the Cohesion Policy’s importance, and they stressed that it should remain a key pillar of the EU budget in the next financial period. Besides lobbying for financial instruments, cooperation can also be observed in other fields within the European Union.

The V4 in the main European institutions

The complex logic of the European decision-making process requires cooperation within the main European institutions. As the role of the different institutions varies, the level of cooperation among the four countries also differs in each of them.

Out of the 751 deputies of the European Parliament, 106 are from the Visegrad region. However, as the MEPs are working in different cross-national political groups, the cooperation on an EP level follows interests defined by party politics rather than regional partnership.

In the European Commission, the V4 countries have been attained more and more important portfolios since their accession, and this trend might continue after the von der Leyen Commission has set up. It is expected that Polish Commissioner-designate Janusz Wojciechowski will be responsible for the agriculture portfolio, while Maroš Šefčovič and Věra Jourová will be Vice-Presidents of the next Commission, and the Hungarian Commissioner might be in charge of the enlargement and neighbourhood portfolio.

Due to the institutional logic of European politics, real political cooperation can rather be observed in the European Council. The V4 has never been institutionalised, and this characteristic facilitates the ad-hoc cooperation of the representatives of their governments in the Council. Even though the current governing parties are part of different European political groups—as that of Hungary is in the EPP, that of Poland is in ECR, that of Czechia is in Renew Europe, and that of Slovakia is in S&D—the flexibility of the V4 provides them with an open framework for discussing their common political interests in the European politics. A strong and plain-to-be-heard sign of this was their Joint Statement on Migration that has been released in February 2016.

When it comes to the top EU jobs, former Polish Prime Minister Donald Tusk was elected as the President of the European Council for two terms, and, recently, he was nominated for the leadership of the European People’s Party. The V4 also had an important voice in the nomination of the next President of the European Commission. For different reasons, neither Manfred Weber nor Frans Timmermans was acceptable to the four countries, and this is why they celebrated Ursula von der Leyen’s nomination and election as positive news for the region.

The V4 tends to cooperate on important internal issues in the European Union. If they manage to coordinate their voice even better, they might have an even more important role in the European Council because of the change in the distribution of power in the EU27 after Brexit—although the European Union still has to find a way to fill the financial gap once the United Kingdom stops contributing to the European budget.

The V4’s posture towards the external relations of the EU: challenges and perspectives

Concerning the EU’s external relations, the V4 has defended common positions many times, although, in some cases, they remained disunited.

In the case of the enlargement of the European Union, the V4 was in favour of Croatia’s accession, and such strong support is still present towards the six other Balkan countries. In September 2019, the V4 Prime Ministers argued in a joint statement that “the EU enlargement policy provides an invaluable tool for achieving security, stability, and prosperity in the Western Balkans.” In October 2019, the four foreign ministers of the V4 countries pushed for the opening of the accession negotiations with North Macedonia and Albania before the European Council Summit. However, their pro-EU accession approach towards the region was not backed by France, as, seemingly, enlargement fatigue still persists in the Western part of the Union.

Besides the Western Balkans, the Eastern Partnership countries are also important for the region. In fact, the project was initiated by Poland and launched in Czechia in 2009. The cooperation with the Western Balkans and the Eastern neighbours of the EU has especially been important since the outbreak of the Russian–Ukrainian conflict and the start of the migration crisis. In this regard, it is interesting to observe how the attitude of the V4 depends on their relations with Moscow.

While the Central European countries are celebrating their fifteen years of membership, it is also time to examine the future perspectives and challenges the EU’s 28 member states have to face together. To ask and answer these questions, the Antall József Knowledge Centre and the Wilfried Martens Centre for European Studies will organise a conference, entitled “15 years After the Accession—The Visegrad Countries in the European Union” in Brussels on 24 October.