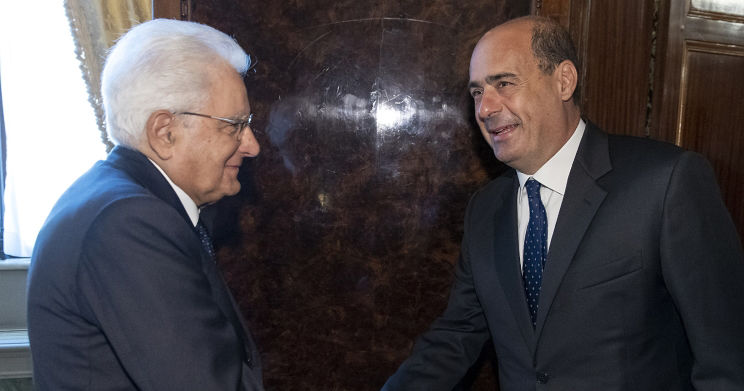 In Light of the PD–Five Star Movement Coalition Deal

The Italian domestic and government crisis initiated by Matteo Salvini at the beginning of August has reached a new phase on 28 August, when two political forces, the Five Star Movement and the Democratic Party, expressed their willingness to collaborate to form a new coalition. The new government’s political agenda is expected to become definitive in the upcoming period, but there is no doubt that the coalition will initiate reforms on several issues, and the changes will sharply contrast with the political guidelines of the previous administration. Migration is one of the matters in question where a different approach that leaves behind the hard-line “closed ports” logic used by the former Minister of Interior Matteo Salvini can be expected.

It took three months after the general elections held on 4 March 2018 until a new government was formed in Italy with the participation of the Five Star Movement led by Luigi Di Maio and the League led by Matteo Salvini. This political formation had fourteen months to realise its political program and launch its main reforms, as the cooperation ended at the beginning of August. The conclusion of the partnership was the consequence of Matteo Salvini’s announcement on 8 August, according to which the politician could no longer govern with the Five Star Movement in the absence of effective cooperation between the two parties. The League and Salvini tabled a no-confidence motion against Prime Minister Giuseppe Conte, who resigned on 20 August, effectively averting the vote.

Next, Italy had two options to avoid a deeper political crisis. The first scenario was that parliamentary parties would try to reach an agreement under the Head of State Sergio Mattarella’s mediation in order to establish a new coalition government. President Sergio Mattarella asked the country’s main parties to find a compromise until 28 August. In the absence of the previous solution, the second scenario would have been the dissolution of the parliament and a call for new elections. When the deadline expired, the Democratic Party (Partito Democratico, PD) and the Five Star Movement (Movimento Cinque Stelle, M5S) announced their willingness to collaborate in order to establish a new government, which was a step towards a possible solution to the country’s political crisis. However, there is no guarantee that the new government could operate as a well-functioning, strong, and effective coalition in the upcoming period.

It is important to highlight that significant differences can be seen between the two political forces not just in their ideology and political views but also in their vision and goals for the future. In the light of the above, it is not surprising that the negotiation process is quite challenging for them. They have divergent positions on a number of questions, such as the issue of migration or the future direction of the relations with the EU and Brussels. While the Five Star Movement, as a member of the yellow-green coalition, has expressed a clear EU-critical stance over the past fourteen months together with the League, the PD would prefer a straightforward pro-EU policy and a more open and solidarity-based approach towards immigration.

It is important to highlight that a total of 648,117 migrants and asylum seekers (in 2014, 170,100, in 2015, 153,842, in 2016, 181,436, in 2017, 119,369, and, in 2018, 23,370) arrived on the southwest coasts of Italy through the Mediterranean route between 2014 and 2018, which was a major challenge for the country. Consequently, the Conte Government emphasised that, in the future, Italy could not be left alone in the management of migration. Following the same logic, shortly after the launch of the yellow-green coalition, the then Italian government made its intention clear to address the issue of migration through a common, systematic European solution.

Last year, the new leadership gave a clear signal that it no longer accepted the previous situation, and it intended to apply a more pragmatic and unswerving migration policy than before (we analysed the background of this attitude in one of our previous articles). Therefore, one of the key objectives for Matteo Salvini as Minister of the Interior was stricter migration management during his mandate. The announcement of the policy of “closed ports” and the immigration-security packages adopted last year and this year—which, among others, included strict measures on immigration and a strong regulatory system to control the search and rescue activities of the NGOs—were the most significant measures introduced by Salvini to manage immigration.

The future of the immigration policy was one of the most sensitive areas during the negotiations between the Five Star Movement and the Democratic Party planning to establish a coalition. At the beginning of the negotiation process, the Secretary of the PD Nicola Zingaretti set out five key political priorities and conditions which, among others, included reforms in the future management of immigration. The politician added that, in the framework of the above objectives, he would assign a central role to the European Union. After a meeting with Sergio Mattarella, Zingaretti also stressed that the new leadership would need a clear break from the League–M5S government. In the meantime, with regards to the evolving collaboration between the PD and the League, Matteo Salvini emphasised that, in case the Democratic Party returned to power, they would open the Italian ports again.

Taking into consideration Nicola Zingaretti’s earlier statements and the Democratic Party’s approach towards immigration in the past years, the future of the mentioned controversial anti-immigration laws is questionable. There is a fat chance that the PD would accept the further practise of such laws, considering the fact that, in 2018, the party demonstrated against them in the parliament, while, in 2019, it described their stricter version as a disgrace act, and it said that inhumanity must not become law.

In this context, it is important to underline that, during Gentiloni’s cabinet (2016–2018), in 2017, a kind of code of conduct (whose background and effects were analysed in depth in our previous article) was launched by the Democratic Party with the aim of controlling the activity of the various non-governmental organisations (NGOs) carrying out humanitarian and rescue operations on the Mediterranean Sea and making it more transparent. Even though the common logic of this stricter regulation and the recent pragmatic policy of the yellow-green government could pave the way for taking a new, consensual direction between the new coalition partners in the management of immigration, it is improbable that the PD would support the further application of the draconian responses and regulations introduced by Salvini.

Regarding the question of immigration, former Italian Prime Minister Matteo Renzi emphasised that one of the alliance’s first major tests would be striking a balance on migration, moving away from Salvini’s angry assaults on NGOs saving migrants in the Mediterranean, while keeping pressure on Brussels to forge policies that take the pressure off Italy. “Of course, EU rules on migration need to be revised, of course, we need a Marshall Plan for Africa,” Renzi said. “It’s foolish to think we can welcome everyone, but surely everyone must be rescued at sea.”

Nicola Zingaretti, leader of Italy’s Democratic Party, highlighted that the future priority of his party, among others, is a radical change in Salvini’s migration-security package.
Source: Twitter

With regards to the future management of migration and the elaboration of new policies, it is important to pay attention to Italians’ opinion about the question. According to a research conducted by a research group from the University of Siena, 59% of the Italians agreed with the Conte Government’s policy of closing the ports, while a lower proportion believed that the measure is unacceptable (41%). It is also worth pointing out that, among the League and Five Star Movement voters, the proportion of those who agreed with the “closed ports” was much higher, 92% and 67%, respectively, while 85% of the centre-left opposition voters believed that the latter was unacceptable. It is, therefore, clear that not only the politicians of the PD, but also a significant part of its supporters would agree with opening the Italian ports. At this point, it should be highlighted that the League’s approval rate was around 36-37% in the past few months (currently it is around 33-34%), while the PD’s popularity was around 22-24% (currently it is around 21-22%), which clearly indicates that the proportion of those Italians who agreed with a stricter migration policy is higher compared to those who consider it unacceptable.

When the ruling coalition elaborates its new approach to immigration, the foregoing figures cannot be left out of consideration. Regarding the proposed new directions on migration, the government’s twenty-nine-point draft program reveals that the new executive would prefer to develop an effective European approach that can address the problem in a comprehensive manner. Furthermore, the reform of the Dublin Regulation would be one of their most important priorities, and they would pay special attention to combating human trafficking and illegal migration, while they would also put more emphasis on the immigrants’ integration process to make it more efficient.

It is difficult to foresee what the long-term outcome of the political bargaining between the Democratic Party and the Five Star Movement will be, but, regarding the future of this somehow unnatural coalition (often defined as a forced coalition or survival government), many are not too optimistic. Even though the new coalition won the vote of confidence in parliament this week, there are no guarantees for its long-term viability, stability, and efficiency. This moment, there is only one constant intersection between their interests and goals: avoiding early elections, which would most likely result in Salviniʼs victory, if the Italians were required to go to the ballot box now.