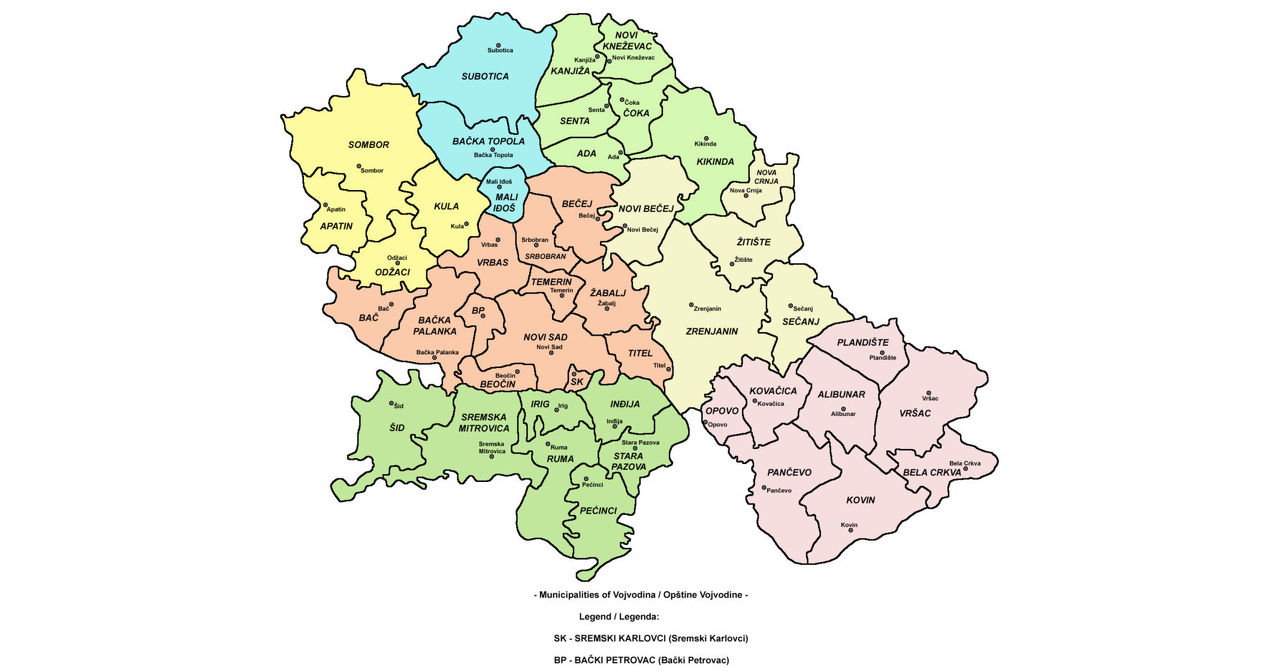 The Hungarian minority community in Vojvodina

After a turbulent historical period, in 1918, the Land of Southern Slavs was formed. Until the 1990s, Yugoslavia represented the state framework for the Hungarian community living within. After the war in Yugoslavia, the Vojvodina Hungarians became part of the multinational population of Serbia. They represent the largest minority community in the country, with slightly more than 250,000 ethnic Hungarians, most of whom live in the Autonomous Province of Vojvodina (Autonomna Pokrajina Vojvodina, APV). In the following blogpost, we will outline the past and present situation of the Hungarians in Vojvodina, taking into account both the political and the educational and social factors. 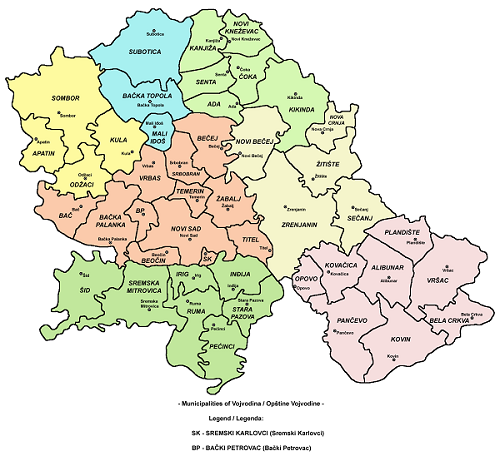 After the break of Yugoslavia and the wars in the 1990s, the situation and the political activity of the minorities living in Serbia changed. Regarding the Hungarian community, in this period, the first Hungarian minority parties in Vojvodina were founded: the Democratic Fellowship of Vojvodina Hungarians (Vajdasági Magyarok Demokratikus Közössége, VMDK) in 1990 and the Alliance of Vojvodina Hungarians (Vajdasági Magyar Szövetség, VMSZ) in 1994, which were followed by other parties in the late 1990s and during the 2000s. Currently, in Serbia, there are seven Hungarian minority political parties, as well as the Hungarian Movement (Magyar Mozgalom) established in 2015, which functions as a non-governmental organization.

The Autonomous Province (AP) of Vojvodina has a Provincial Government and an Assembly which operates in accordance with the Serbian Constitution. Since 2016, the ruling coalition in AP Vojvodina has been the Serbian Progressive Party (Srpska napredna stranka, SNS), the Socialist Party of Serbia (Socijalistička partija Srbije, SPS), and the Alliance of Vojvodina Hungarians (Vajdasági Magyar Szövetség, VMSZ). István Pásztor is the President of the AP Vojvodina Assembly, and the Chairman of the Alliance of Vojvodina Hungarians (VMSZ).The VMSZ has four members of the Serbian parliament, four state secretaries and several officials in AP Vojvodina in Serbian institutions, as well as Andor Deli, member of the European Parliament (Fidesz – Magyar Polgári Szövetség – Kereszténydemokrata Néppárt). 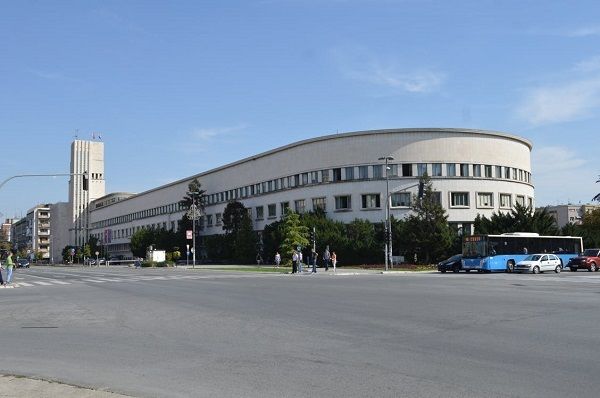 The Banovina Palace in Novi Sad, the seat of the Provincial Government and the Assembly of the AP Vojvodina
Source: Pexels, author: vlada konus

In Serbia, several laws focus on the rights of minorities living within the country, such as the Law on the Protection of Rights and Freedoms of National Minorities (2002) and the Law on National Councils of National Minorities (2009). National councils of national minorities are organisations with a four-year mandate, supported by the state budget. One minority community can have only one selected national council of at least 15 but no more than 35 members (proportional to the size of the given community). They have certain authority regarding the given national minorities’ culture, education, information sources, and language use. For example, the national council proposes the general principles of pre-school programmes, as well as the contents of elementary and high school education programmes that express the defining features of the national minority (e.g. history, music education, and fine arts).

The last national minority council elections in Serbia were held in November 2018, when 18 of the 22 national minorities living in the country directly elected their minority self-government. The Hungarian community could choose between two lists: Magyar Összefogás supported by the VMSZ, and a list, entitled Magyar Mozgalom – Zsoldos Ferenc. Similarly to the previous, 2014 elections, Magyar Összefogás won the majority of the votes, thus, it gained 30 representatives in the council, whilst 5 representatives will be delegated by Magyar Mozgalom – Zsoldos Ferenc.

Serbian is the official language of the country, using both the Cyrillic and Latin alphabets. In those regions where other nationalities live, their languages and writing systems are also in official use, together with the Serbian language. 88% of the population considers Serbian their mother tongue, whilst approximately 3.4% says that their native language is Hungarian. In Vojvodina, six languages are in official use: Serbian, Hungarian, Slovakian, Croatian, Romanian, and Rusyn. These languages can be used by members of the given community in courts, administration procedures, and for obtaining various documents. Municipalities, where the minority language is officially in use, can operate kindergartens and primary and secondary education institutions instructing in the given minority language, but pupils are required to learn Serbian as non-native language as well.

Higher education in the Hungarian language is available through study programmes at some faculties, and there is also the Hungarian Language and Literature study programme at the Faculty of Philosophy in Novi Sad, the Teachers Training Faculty in Hungarian in Subotica, and the Department of Hungarology at the University of Belgrade’s Faculty of Philology. The Assembly of the Autonomous Province of Vojvodina adopted a decree in 2015, which enables students to take the entrance exam at higher education institutions in minority languages that are in official use on the territory of Vojvodina. In practice, this was not always the case. In December 2015, the Union of Hungarian Students in Vojvodina (VaMaDiSZ) launched a lawsuit against the Faculty of Law in Novi Sad because this educational institution did not provide the necessary conditions for taking the entrance exam in minority languages—among others in Hungarian. In April 2018, the Novi Sad Court of Appeal decided in favour of the VaMaDiSZ, therefore, the Faculty of Law is obliged to take the necessary steps in the future and provide the entrance exam in minority languages as well—among others in Hungarian. 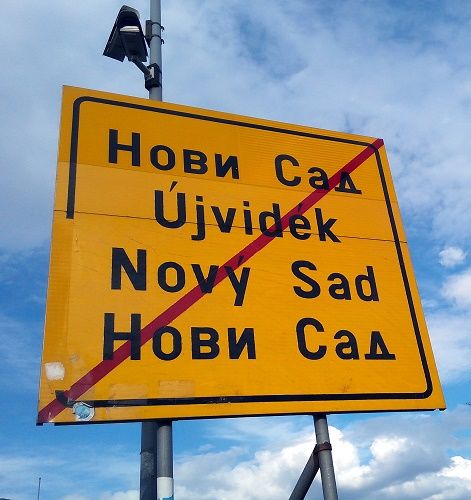 Traffic sign marking the exit from Novi Sad, with the name of the city in Serbian, Hungarian, Slovak, and Rusyn
Source: Shutterstock

Similarly to other regions, the decline of the Hungarian population is felt in Serbia as well. According to the 2002 census data, approx. 293,000 Hungarians lived in Serbia, while, by the time of the 2011 census, the number of Hungarians shrank to around 250,000. In the North Bačka and North Banat districts—areas bordering Hungary—the municipalities with the absolute Hungarian majority, including Kanjiža, Senta, Ada, Bačka Topola, and Mali Iđoš, are located. There is a relative Hungarian majority in the Subotica, Čoka, and Bečej districts. The towns of Subotica and Novi Sad are considered to be the cultural and educational centres of the Hungarian community living in Vojvodina, although, in these cities, the Serb community forms the majority of the population. In multinational municipalities, there are multilingual town names and street signs, but they are also occasionally vandalised, especially those written in minority languages.

On 25 November 2018, the centenary of the annexation of Vojvodina to the Kingdom of Serbia took place. The necessary conditions regarding minority rights and education are provided in Serbia today, however, its multiethnic and multireligious regions face similar difficulties as the neighbouring ones: migration and population decrease. One can only guess what the characteristic trends of the next hundred years will be, but, when we look beyond the migration and economic issues, we can find different initiatives, NGOs, social and cultural organisations that encourage and develop the community building among people.