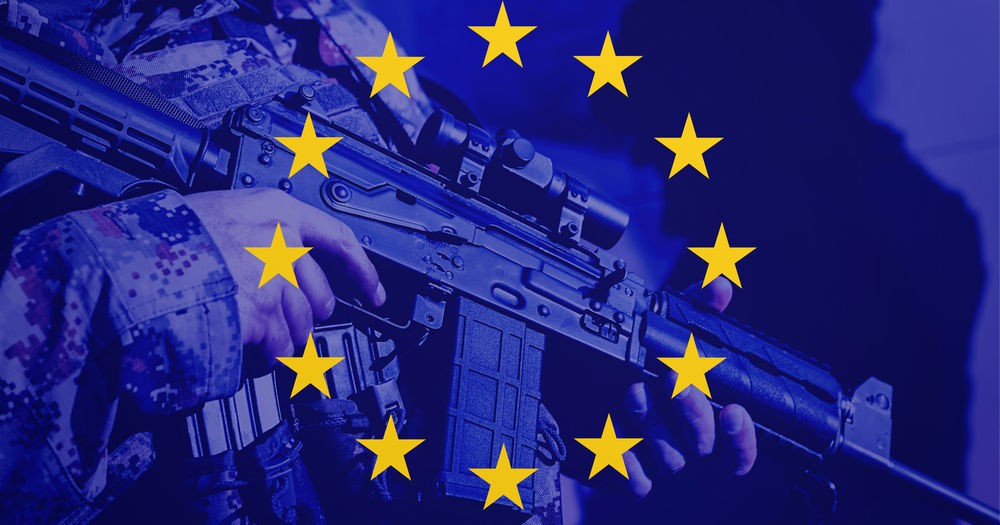 The Military Capacity of the European Union

The common security and defence policy has been a priority in the European Union since the 1990s.

The common security and defence policy has been a priority in the European Union since the 1990s. Over the last three decades, great emphasis has been placed on the institution-building processes and the deepening of military cooperation. However, experts share different visions about the future of the Union’s role as a military actor.

Defence policy has a prominent place within the European Union, although this area exclusively belongs to the authority of the Member States. According to a 2018 survey, 68% of Europeans would like the EU to do more in the field of defence and security, while another study said two-thirds would support the further deepening of the common security and defence policy, which also entails the development of common military capabilities. All this has encountered a number of obstacles over the years, as the Member States have been divided on these issues, making it difficult to find a compromise and to implement coherent capacity development plans. In addition, external and international affairs have had a major impact on the objectives of the Union’s military ambitions and their implementation. This article examines the EU’s role as a military actor from the recent past to the present.

The Common Foreign and Security Policy (CSDP) became part of the European Union’s political topics with the signing of the Maastricht Treaty. This was followed by the transferring of the Petersberg Tasks to the authority of the EU. These tasks include humanitarian and rescue tasks, conflict prevention and peacekeeping, tasks of combat forces in crisis management, joint disarmament operations, military advice and assistance tasks, and post-conflict stabilisation operations. To realise all this, it has become necessary for the integration process to cover issues of common defence and for the EU to become able to carry out autonomous actions and have a credible military force, an appropriate organisational structure, analytical capacity, intelligence, and strategic organisational capacity. All these ambitions were embraced by France and Britain and recorded in the 1998 St. Malo Declaration. The two countries’ initiative was adopted a year later at the Cologne Summit by the Heads of State and Government of the EU Member States, and the specific objectives, also called as the Helsinki Headline Goals, were set at the Helsinki Summit in 1999. According to this, EU Rapid Operational Forces would have been set up by 2003, representing a military force of 60,000 personnel, which could have been mobilised within two to three months and kept in service for at least one year.

The development of EU military capabilities required the establishment of new political and military institutions, which took place in 2000 under the Treaty of Nice. A Political and Security Committee (PSC) has been set up to monitor international affairs in the field of defence and security policy, formulate resolutions, monitor their implementation, and exercise political control over and give strategic direction to crisis management operations. Moreover, the EU Military Committee (EUMC) has been set up to advise the PSC on military crisis management and to support its work in the field of military capability development. Last but not least, the EU Military Staff (EUMS) has also been created to be responsible for planning the various actions and exercises and to assist the Military Committee.

The establishment of EU Rapid Operation Forces by 2003 was made impossible by internal divisions within the Union, so the next major step in the field of common defence was the adoption of the EU strategy, entitled A Secure Europe in a Better World, in 2003. The document added three new tasks to the previous ones: the implementation of joint disarmament operations, support to third countries in the fight against terrorism, and security sector reform operations as part of wider institution-building. That year also saw the launch of the first EU military mission outside Europe and independent of NATO in the Democratic Republic of Congo, which was followed by nine more EU military missions, six of which are still ongoing.

In 2004, the development of the battlegroup concept began. This meant setting up units of 1,500 personnel that could be deployed within fifteen days to carry out operations and run for at least thirty days, particularly at the request of the United Nations. The battlegroups have reached their full operational capability since 2007, enabling the EU to respond quickly to crises and conflicts, but they have not yet been deployed due to political, financial, and technical obstacles.

The next milestone in the development of common defence and military capabilities was the release of the Shared Vision, Common Action: A Stronger Europe. A Global Strategy for the European Union’s Foreign and Security Policy in 2016. It helped to set up a coherent structure on the field of CSDP. Among the projects launched in line with the objectives of the Global Strategy, I would first highlight the Permanent Structured Cooperation (PESCO), which has allowed the Member States to cooperate individually and on a voluntary basis with each other in the field of defence since 2017. All EU Member States, with the exception of Denmark and Malta, are currently participating in PESCO, and a total of forty-seven projects are under way. They cover almost all areas of military cooperation, including training, land, maritime and air operations, cyber defence and C4 operations, as well as operations in the outer space. To finance PESCO projects, Member States have the possibility to apply for support from the European Defence Fund (EDF), which was also set up in line with the objectives of the Global Strategy. Its first cycle will be launched in 2021. Thirdly, I would like to highlight the strategic command and control structure established in 2017 within the EU Military Staff, the Military Planning and Conduct Capability (MPCC), which will be responsible for the Union’s non-executive missions from 2020. 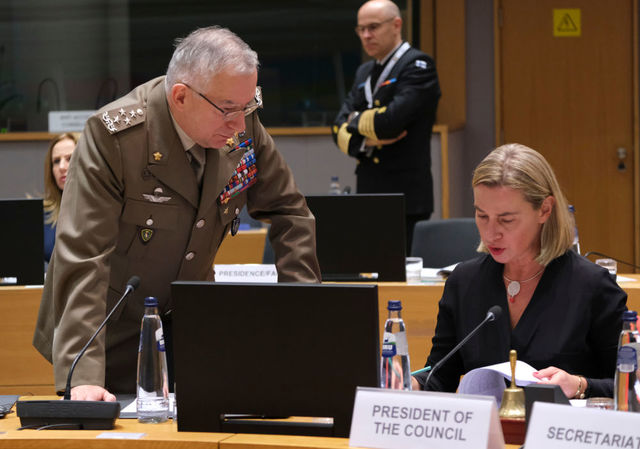 The Chairman of the EUMC is talking with the High Representative of the Union during a Council defence meeting
Source: Alexandros Michailidis/Shutterstock

Based on the above, the Union’s military strength consists of battlegroups and national forces involved in mission activities and PESCO projects. We have observed that the Member States of the Union have typically been determined to take the necessary steps to strengthen their common defence policy and military capabilities, but, in reality, this determination remains mere rhetoric due to the lack of real commitment and capabilities. In 2018, a group of experts conducted a scenario-based analysis on the ability of the Member States to carry out CSDP full-spectrum operations. The results showed that the Union is only able to carry out humanitarian assistance operations if the United Kingdom also contributes to them, but, in all other scenarios, there is a significant capacity gap and shortfalls, which is even greater without the UK. The study concluded that current procurement plans up to 2030 would result in some improvement but will not end the identified capability shortfalls in a context where ageing military technology and equipment would become an increasing problem. At the same time, the Union needs to achieve a higher level of integration in order to meet its military ambitions. Many Member States see this as the weakening of their national sovereignty. Furthermore, NATO’s presence as the number one military alliance also calls into question the EU’s military role on the continent, leading in many cases to unnecessary parallelisms and spending.

For future EU military engagement and capability development, experts outlined several scenarios, three of which I would mention here. Firstly, there is the possibility that the current trend will continue and the Member States will show their commitment to the issue on a rhetorical level, but gaps between public praise and capabilities persist. In the second case, the United States could begin to reduce its political and military role in Europe and NATO, which would open up two options for the Alliance’s future, and both would seriously affect the Union’s further military ambitions. On the one hand, NATO’s role in Europe may be questioned, and, therefore, European countries would consider it more important to build strategic autonomy for the EU, led by France and Germany. The realisation of this scenario could also lead to a deterioration in the European security situation, as the EU would not yet be ready to act, while NATO would no longer be able to. On the other hand, as a third scenario, the “Europeanisation” of NATO could also happen, and the role of withdrawn American forces could be taken over by European NATO member states who decide to Europeanise NATO rather than develop EU defence. This process could be led by France, Germany, and the United Kingdom.

The future is dubious, so we need to focus on the present, and the present requires European countries to be able to protect their territorial integrity, citizens, and interests. To this end, on the one hand, it is important to develop real military capabilities within the framework of European modernisation projects. On the other hand, the maintenance of the alliance with the United States is vital. Alienating Americans would have a negative impact on the defence of Europe, as the countries of the continent cannot defend themselves autonomously and will not necessarily become able to do so through development.