The weakening of the Iran deal

The strengthening of the Iranian deep state

Most recently, the Trump administration has launched a campaign against Iran from two directions. On the one hand, by reinstating a full economic embargo against Iranian goods, the US administration anticipates the full meltdown of the Iranian economy as well as the fall of the Iranian regime and government. On the other hand, in their official statements, US government officials welcomed the potential change of regime in Iran, indirectly supporting an unfolding social media campaign against the Islamic state. This (erroneous) strategy will result in the weakening of the Iranian pragmatist political block, while also consolidating the power of the regime’s hawkish elements, who are the representatives of Iran’s deep state.

In the current form of the Iranian state, which might be best described by its dualist nature (a presidential system based on democratic institutions in the foreground with the supreme leader ruling and vetoing from the background), the democratically-elected president and his government do not necessarily represent the foreign political and economic interests of the regime (the supreme leader and his supporting elite). In fact, when we analyze Iran’s official foreign policy, we look at the maneuvers made by the government in a limited arena, either accepted or tolerated but most of the times not endorsed by the supreme leader. The government is merely a facet of Iran’s foreign policy concealing the regime’s real intentions. Probably the best example of the differing worldviews by the incumbent government and the supreme leader was the apparent optimism and trust expressed by Hassan Rouhani and pessimism and distrust on the part of Ali Khamenei before and during the negotiations of the Iran nuclear deal (JCPOA). Through his anti-Western rhetoric, the supreme leader voices the economic interests of his supporters among the military and religious establishments. It can be best described as a paradox of the Iranian state as the absolute leader of the country and the elite backing him try to enforce their interests on the detriment of Iranian public interests. Based on this notion, we have to distinguish the government, which plays a rather ceremonial role in Iranian foreign policy, from the powerful actors of the deep state level. 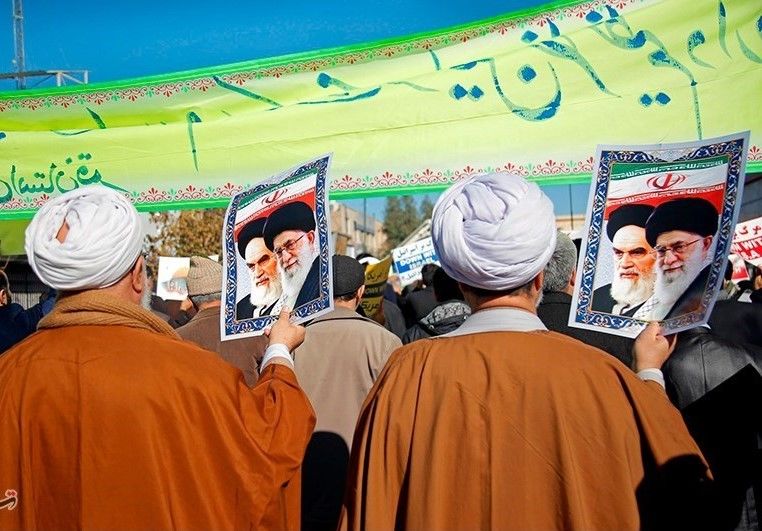 In the following ten years of the Islamic revolution, which covers the Khomeini era, Iran’s domestic and foreign policies were determined by Khomeini’s anti-Western ideology and stance. In 1989, a revision of Iran’s constitution provided the president with a greater role in politics, since the tenure of Akbar Hashemi Rafsanjani (1989-1997) and during the tenures of other pragmatist-liberal presidents, Iranian presidents were able to separate the ideological provisions of the Islamic revolution from real politics, thereby providing the state with the opportunity to reestablish Iran’s international relations to a certain degree. This new liberal approach towards foreign policy made only sense when the Iranian government represented the Iranian economic interests of the majority of the elite. By the presidencies of Mahmoud Ahmadinejad (2005–2013), Iranian public and state properties had been accumulated in the hands of the regime’s hardliner supporters, the different military and religious institutions. As a result, the supreme leader and the elite of hardliners monopolized most of Iran’s economic sectors. In fact, by 2006 the military establishment reportedly acquired such enormous wealth  in each and every economic sector that the private sector is unable to challenge it. Thus, as of today, it is not only the limits of their political capabilities but also the asymmetry of economic wealth between the pragmatists and hardliners that paralyzes the Iranian government for the benefit of the regime. Since 1979, the supreme leader’s bloc has been promoting political and economic isolation from the West, apparently based on their ideologies but as we can see for rather pragmatic purposes. Therefore, Rouhani’s internationalist policies go against the currents. The politically and economically strongest players of the regime provide only limited opportunities for the socially sensitive government to achieve their aims, while also blocking any decisions that harm their selfish interests. 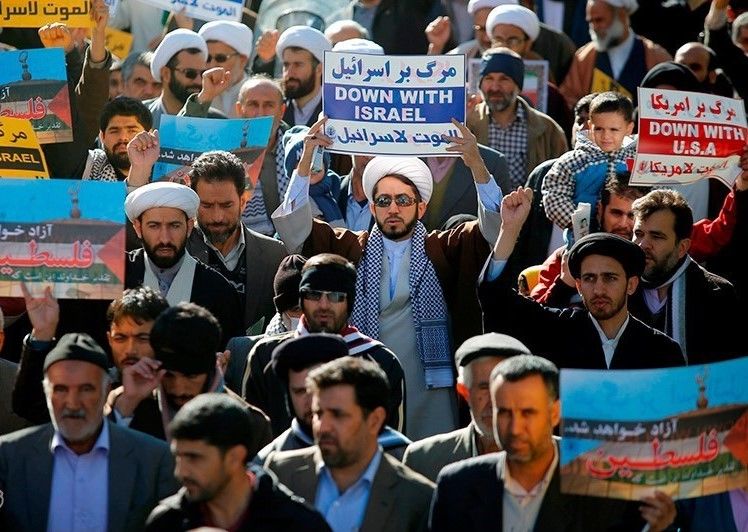 The personal business empire of supreme leader Khamenei and that of the Islamic Revolutionary Guard Corps (IRGC) are the most powerful players in the Iranian economy as they involve the major companies in most of Iran’s industries. Some experts estimated that Khamenei’s business conglomerate named Setad (often referred to it as EIKO), together with IRGC’s business network, is worth two thirds of Iran’s economy. Setad, IRGC and related companies have been subject to US economic sanctions since at least 2013. Consequently, the aforementioned entities would hardly be capable of trading in a free market economy guaranteed by the JCPOA as being formally or partially sanctioned would limit their opportunities vis-à-vis companies with a clear sanctions history. In contrast, in a free market economy with a growing number of foreign investments, the liberal-pragmatist elite could strengthen their economic positions or at least witness the weakening of hardliners. One of the biggest failures of Rouhani’s social reform initiatives was that he failed to nationalize the IRGC’s wealth, mainly due to the blocking of the supreme leader, who simply does not have an interest in the disempowerment of his supporting elite. Besides the military establishment, the supreme leader is highly dependent on some elements of the religious establishment. Therefore, Khamenei appoints some of his closest conservative allies to be heads of Iran’s wealthiest religious establishments.

Rouhani and his pragmatist political bloc achieved a historic success by winning the 2017 presidential elections. Ebrahim Raisi lost some of the traditionally-conservative electoral districts, all of them supporting Rouhani. Rouhani’s victory was mainly due to the successful conclusion of the nuclear negotiations: despite the lagging economic development in 2016 following the implementation of the JCPOA, a general optimism regarding the expected progress and the evidently populist stance of Raisi all convinced voters to support Rouhani. However, in May 2018, following Iran’s perceived non-compliance with JCPOA provisions by developing its ballistic missile program and supporting its allies in the neighborhood conflicts, the US unilaterally withdrew from the nuclear agreement and scheduled a full economic embargo against Iran in two rounds, in August and in November.

Trumps announcement of withdrawing from the JCPOA was welcomed by European nations with criticism and, just like the Iranian government, they articulated their commitment to the implementation of the JCPOA’s provisions. It is in the definite interest of the Iranian government as well as its economic development to uphold the agreement and diversify the Iranian economy. At the same time, the hardliners consider the key of their success to be the cancellation of the JCPOA agreement. In spite of the slow economic consolidation after the implementation of the JCPOA, Rouhani’s government was able to secure a second term in the 2017 elections, but it is highly unlikely that they can enjoy support after the US’s withdrawal from the deal and the implementation of a full economic embargo. The latter situation would definitely facilitate the rise of the hardliners. Khamenei’s supporters can factually support the idea that the Rouhani government is personally responsible for the non-compliance with the deal.

From one perspective, the Rouhani government might be blamed for increasing the support of its regional allies and continuing Iran’s ballistic missile development program, based on which the US administration allege Iran to be a supporter of terrorism. At the same time, Rouhani is a victim of the paradoxical Iranian leadership structure as the government only makes a decision on the allocation of expenditures, while the supreme leader himself is the chief commander of the Iranian armed forces and unilaterally makes decisions on military expeditions that impose huge financial burden on the Iranian people. Unpopular economic expenditures based on the supreme leaders’ command apparently disregard social needs, amongst them the high rate of unemployment, and in the long run might result in the political suicide of Rouhani’s government.

As the sole impediment in the way of restructuring the Iranian deep state is Iran’s current supreme leader, the only way of weakening the hardliners’ economic status would be through the support of a pragmatist head of state. The failure of the bottom-up reform movements in the 2000s, and the violent suppression of popular movements are quite solid proofs that only a top-down reform development could potentially lead to a softer regime. The liberal-pragmatist candidates secured the majority of votes on the Assembly of Experts election in 2016. In case the old and ailing supreme leader passed away in the upcoming years, the aforementioned governmental body which elects the next supreme leader might decide on a candidate who has a more favorable stance toward the West in general. 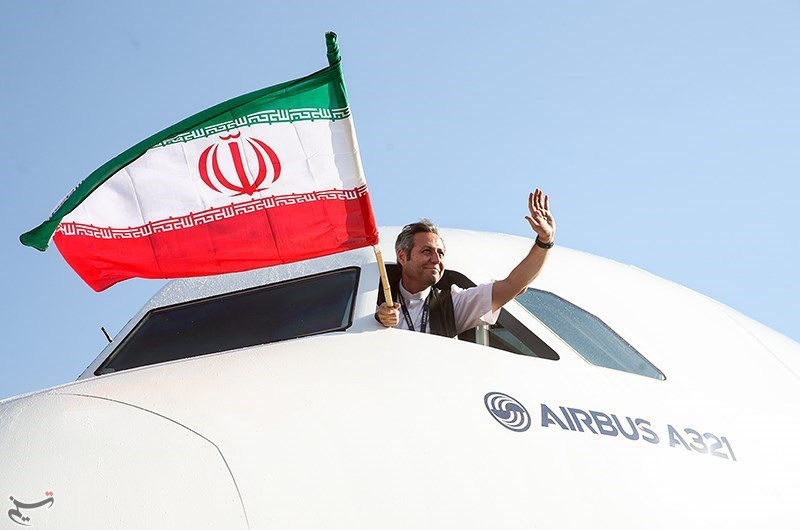 The arrival of newly-bought Airbus airplanes at Tehran after the release of economic sanctions
Source: Wikimedia Commons, Mohammad Ali Marizad, license: CC BY 4.0

Pessimistic voices forecast that the Rouhani government will fall in 2018. In my opinion, there are two ways to avoid this scenario: the Trump administration realizes that keeping the JCPOA alive will lead to the moderation of the regime even in the short term if a moderate candidate will inherit the position of supreme leader in the next few years, or the European members of the JCPOA will engage economically with Iran, notwithstanding a full American economic embargo. If these conditions fail to be realized alongside the serious political and economic meltdown in Iran, the fall of the Rouhani administration before the end of its term would be a realistic scenario. One thing is sure, the prolongation and failure of the renegotiation of the JCPOA conditions will probably lead to the further consolidation of the deep state’s economic and political power. Indeed, this failure is highly anticipated due to the deep state’s interests and the limited political means of the pragmatists.

The opening pic is by Wikimedia Commons, Mohammad Ali Marizad, license: CC BY 4.0