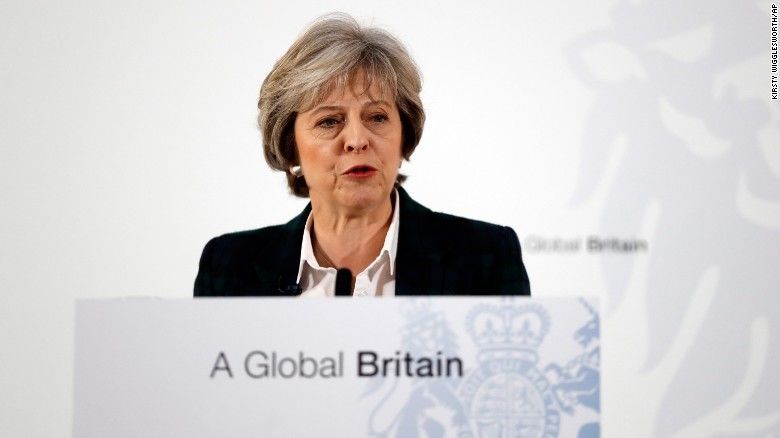 After months of anticipation the PM of the United Kingdom finally revealed her plan for Brexit on the 17th January. In a language that indicated ‘hard Brexit’, Theresa May confirmed that the UK will not seek some sort of partial or associate membership of the European Union, claiming that “Britain can’t be half-in half-out.” In her speech the PM outlined a 12-point plan – containing the objectives of the UK – for the upcoming negotiations.

The UK’s main priorities for the Brexit negotiations could be summarised as below:

The PM highlighted that her aim was regaining full control of immigration and law-making and as a result leaving the single market is inevitable. She also revealed that she hopes to pursue a tax-free trade agreement with the EU and would seek an arrangement to replace the provisions regarding the customs union of the EU law. While she stressed that the UK would be free to make its own trade and customs agreements with third countries, she is open to an arrangement which could amount to a partial membership of the EU customs union.

May stressed that she wishes a continued cooperation with Europe in several fields. She expressed her desire for alliance with Europe in intelligence sharing, fight against crime and security policy. She also emphasised the importance of collaboration in science and technology, recognizing that the academic and scientific community is one of the greatest strengths of Britain.

In her vision about Britain’s future she wishes to focus on strengthening the cooperation between the four nations of the United Kingdom. In order to do that she said she will welcome the propositions of Scotland, Wales and Norther Ireland regarding the negotiations.

May said she would seek a “phased process of implementation” in order to provide time for preparations and calm fears of sudden jolts to the economy. The British currency has endured a rocky ride since the vote last summer to leave the union, but the sterling responded strongly to Ms May’s speech, wiping out losses earlier in the week. She aims to finish the negotiation in two years and promised that the both Houses of the Parliament will vote on the deal at the end.

The PM said that she wishes for an equal partnership between a strong Britain and a strong EU, expressing her support for the European Union and its remaining members.

Ready as soon as UK is. Only notification can kick off negotiations. #Brexit

Donald Tusk, President of the European Council, welcomed the “more realistic announcement” in his tweet.

The Irish Government released a statement:

“She made clear that her priorities include maintaining the common travel area and avoiding a return to a hard border with Northern Ireland, both of which are welcome...”

Some sceptical opinions were also expressed. Guy Verhofstadt, the Brexit point man of the European Parliament (and a strong proponent of European federalism) warned that the EU would not accept a deal that would leave Britain better off after Brexit.

Scottish First Minister Nicola Sturgeon released a statement after the PM’s speech in which she claimed that a second independence referendum is “highly likely,” arguing that leaving the single market is “economically catastrophic.”

Theresa May intends to trigger Article 50 by the end of March and start the negotiation process.

You can read the full speech here.