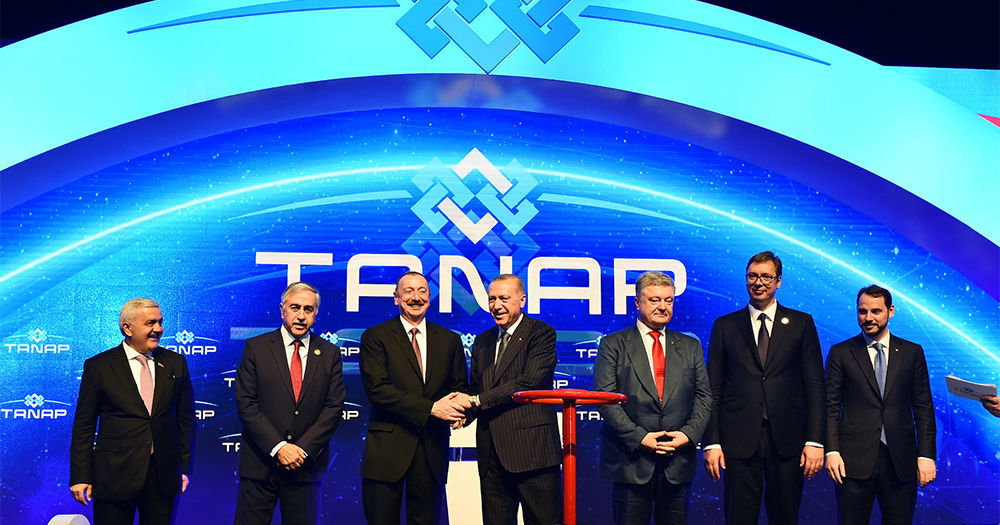 It is beyond doubt that in June 2018 Turkey got into the centre of attention due to the early elections in the country. However, it is timely to talk about another strategic event that took place in the same month. On 12 June, the Trans-Anatolian Pipeline was inaugurated. This natural gas pipeline that crosses the entire country, often referred to as the “Silk Road of Energy,” is not only pivotal from Turkey’s point of view, but it might have an impact on the future of energy supply security in the whole of Europe. This article sheds light on the most important implications of this project.

The inauguration ceremony of the Trans-Anatolian Pipeline (TANAP) took place in Eskişehir on 12 June 2018. The gas pipeline is designed to transport natural gas from the Eastern province of Ardahan, crossing a total of 20 provinces before arriving to its endpoint in Edirne province, adjacent to the Greek border. The project is part of the European Union’s Southern Gas Corridor initiative, which aims to grant access to natural gas from the Caspian Sea for European states through a gas pipeline infrastructure stretching from Azerbaijan to Italy. The first phase of this gas corridor, named the Southern Caucasus Pipeline (SCP), has been delivering gas from the Shah Deniz gas fields to Turkey, via Georgia, for more than a decade. Now, the second stage of the corridor, the 1850-kilometer TANAP, has been completed. The third stage is the so-called Trans-Adriatic Pipeline (TAP) that will span from the eastern borders of Greece through Albania to Italy, and deliver natural gas originating from Azerbaijan. The latter infrastructure is under construction at the moment, and it will presumably be put into operation in the beginning of 2020’s. TANAP is designed to carry 16 bcm per annum initially. Of this volume, Turkey will receive 6 bcm of gas each year, and the remaining 10 bcm will be shipped to European markets. Later on, according to the plans at hand, the supply capacity of TANAP will be further expanded, initially to an annual volume of 22 bcm and then to 31 bcm.

It is important to highlight that the inauguration of TANAP is not only a major event for Turkey, but also a pivotal step from a wider, regional energy security point of view. It is beyond doubt that Turkey, given its increasing energy demand, needs to closely follow up from which countries and via what infrastructure it can acquire natural gas that is of key importance to its power generation. It also needs to do it in a way so it can possibly diversify its current gas import structure. By connecting TANAP with its supply channels, Turkey will be able to gain access to additional resources from Azerbaijan. However, it is important to add that this will not drastically change Turkey’s natural gas import structure. At present, Russia is its most important partner, providing 53% of the total Turkish gas import. It is followed—far behind—by Iran with its 17% share and Azerbaijan with its 14% share. In this current setup, TANAP might imply changes, but it is also worthwhile to note that the construction of the Turkish Stream gas pipeline, which establishes a direct natural gas transmission link between Russia and Turkey, was and is going in parallel with the construction of TANAP. The objective of Turkish Stream, on the one hand, is to substitute the Western Route gas pipeline, which goes through Ukraine, a problematic transit country. On the other hand, it aims to enable additional deliveries to Turkey and potentially to further markets. The pipeline’s annual supply capacity will be 15.75 bcm. It is also a question when the planned second string—meaning an additional 15.75 bcm a year—could become operational. In this regard, Gazprom CEO Alexey Miller said in 2018 that, until the end of 2019, both strings of the Turkish Stream would be commissioned. This, on the one hand, can further strengthen the role of energy cooperation in the Russian–Turkish bilateral relations. On the other hand, it can further increase Turkey’s embeddedness in international energy transport and energy trade processes.

In Turkey’s foreign policy communication, it appears as a permanent element that, given the country’s geographic features, it connects energy-exporting countries with energy-importing countries. Thus, Turkey’s objective is to become a significant player in the regional energy security architecture by acting as a reliable transit country. Indeed, the country’s geostrategic position allows Turkey to become an important actor in international energy policy processes, despite the lack of its own hydrocarbon reserves. With the kick-off of TANAP, in a simplified way, one could argue that a more than one-and-a-half-decade quest for a new gas link seems to be resolved. In its backdrop, the main idea was to provide access for European countries to an alternative gas source in order to offset Russia’s European market share. The political will to construct such an infrastructure between the Caspian Sea region and Europe has been present since the 2000’s. Consequently, the construction of the Baku–Tbilisi–Ceyhan oil pipeline, which was commissioned in 2006, can be considered as a forerunner to TANAP. Experts argued back then that, with the launch of this pipeline, an “oil window” was opened to the West. The most important point of this project was that, in the post-Soviet space, there was an energy project that could be realized independent from Russia. The same geopolitical goal would have been served by a whole series of gas pipelines designed to bring gas from the Caspian Sea and from Azerbaijan to Europe. However, these plans have failed one after another, including the most well-known Nabucco project, which would have run through Turkey towards Central Europe. Concerning its goals, the recently realised TANAP investment can be considered as the continuation of these previous project plans. However, there are also significant differences between their and TANAP’s features, including their route, funding, and ownership structure. In the Nabucco project, besides the Turkish energy company BOTAŞ, the shareholders were the energy companies of EU member states, while in case of TANAP, 58% is owned by Azerbaijani SOCAR, 30% by Turkish BOTAŞ, 12% by British Petrol, and 7% by SOCAR Turkey.

Commissioning TANAP and channelling it into the regional energy security dynamics is, on the one hand, a symbolic step that will allow Caspian natural gas to flow to Europe. Consequently, it increases European countries’ chances to buy natural gas from alternative sources. On the other hand, it is important to mention that, with this very project, the often-quoted energy transit country role gained practical meaning for Turkey. It already became an important oil transit country earlier, and now, it can have the same role with natural gas as well. It is true that Turkey used to re-export a small amount of Azerbaijani gas to Greece, but TANAP, as a direct infrastructure, can become a key asset to Turkish transit aspirations. Besides, through the TANAP, Turkey itself gains access to additional natural gas volumes for domestic use. It should be added, however, that TANAP alone, with its 16 bcm annual capacity, is unable to trigger drastic changes in the regional energy trade status quo. Nevertheless, it can be considered as a geopolitically important project, and its success will also be affected by its prospective capacity expansion. For the latter, it is also important that importers find the price of Azerbaijani gas competitive enough to purchase it via TANAP and the Southern Gas Corridor. Likewise, it remains to be seen whether, in the future, other gas producer states might also consider transporting natural gas through this infrastructure to Europe. This can undoubtedly further increase the profitability and geopolitical weight of the project.

The opening pic is by Wikimedia Commons, author: President.az, licence: CC by 4.0.