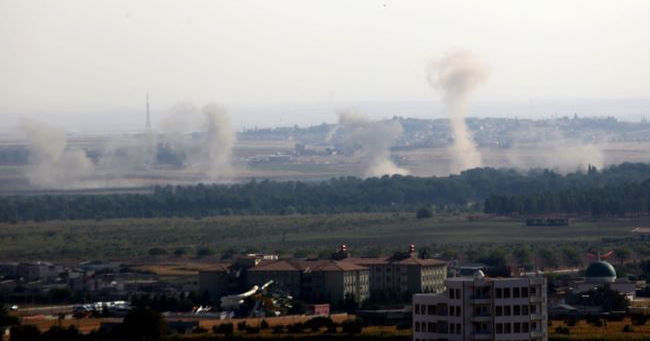 Although, for more than two weeks, the Turkish army has still been conducting its military operation “Peace Spring” in Northeastern Syria, a ceasefire agreement brokered by the US and a pact between Turkey and Russia has effectively stopped Turkish military expansion in its originally designated area. This analysis is focusing on the public perceptions in the West and East on Turkey’s military operation and what the current situation means for the outcome of the Syrian conflict.

Turkey’s military operation “Peace Spring” has been a topic of heated debate among policy-makers both in the West and in the East. The original objectives of the operation, thus the creation of a 1,200 km² safe zone in Syria along the Turkish–Syrian border, the construction of hundreds of newly built cities and villages, and the repatriation of more than 3.5 million Syrian refugees currently hosted by Turkey, have been subjects to negative criticism both among those who have long been the supporters of Kurdish autonomy and also among those who have expertise in the effectiveness of safe zones. On the other hand, Turkey is not deemed to be a honest broker in Syria as it has a personal agenda with the Syrian Kurdish militarist movements that are perceived to be the affiliates of the Kurdistan Workers' Party (PKK), a Kurdish separatist and internationally designated terrorist organization. A Turkish military intervention in an area that has been governed by the Kurds for five years generated the fear of ethnic cleansing among the Kurdish people of Syria. Besides the concerns of ineffectiveness and inhumane conduct, Israel and the Arab states which are involved in the Syrian conflict on the Kurdish side also fear a huge territorial loss to the Syrian regime, Russia, Iran, and Turkey. In effect, the full US military withdrawal from Syria might eventually lead to a peace deal exclusively brokered by the antagonists of Israel, Egypt, and the Arab Gulf states. This would result in a regional order policed by Russia, Turkey, and Iran along with a clear decline of the US-led regional order.

In October 2019, after a long-awaited authorisation was received by Turkey from US President Trump, the NATO member state Turkey has initiated its military mission aiming the seizure of Kobani, Tal Abyad, Ras al-Ayn, Qamishli, and the territories south of these cities, where the majority of inhabitants are Kurds and Turkmens. Operation “Peace Spring” has objectives long sought by Recep Tayyip Erdoğan. In 2016, Turkey conducted operation “Euphrates Shield,” which was a mission authorized by Russia. Turkey was allowed to move into northwest Syria and clear the area from both the Islamic State and Kurdish fighters. In 2018, Turkey conducted operation “Olive Branch,” through which it further expanded its presence to the East. However, the US military presence prevented Turkey’s planned incursion into the whole area north of the Euphrates river. Therefore, President Trump’s decision on 9 October 2019 to pull US troops back from the border area was the long-awaited moment for Turkish President Erdoğan to proceed with the military expansion to the Kurdish-held territories.

Turkey’s goal with operation “Peace Spring” is twofold. First, it wants to eliminate the so-called “terror corridor” along its southern border. A unified Kurdish territory of South Turkey and North Syria with limited Turkish oversight is a horror scenario for Turkey whose number-one security threat has come from the Kurds in the last forty years. Therefore, the Turkish military targets the armed groups belonging to the Kurdish Democratic Union Party (PYD) and the People’s Protection Units (YPG), both deemed by Turkey to be the affiliates of PKK. Second, Turkey wants to find a solution for the repatriation of more than 3.5 million Syrian refugees currently hosted by Turkey. Therefore, provided that it succeeds with its military operations, Turkey has sketched a plan for the creation of a 480-kilometre-long and 30-kilometre-wide safe zone between its border with Syria and the Euphrates river. According to Turkey, this area would be suitable for repatriating at least three million Syrian refugees. 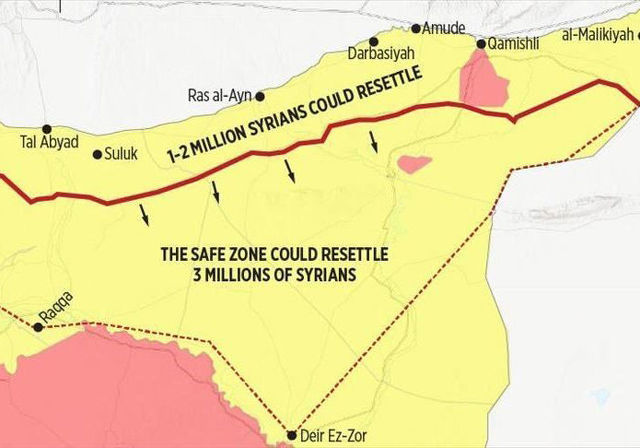 Besides the external threats, Turkish domestic politics also provide an impetus for operation “Peace Spring.” The general dissatisfaction with the economic situation and the popular anger towards the Syrian refugees have weakened the trust in Erdoğan’s presidency and the AKP’s leadership. In the 2019 Turkish local elections, President Erdoğan lost some of his traditional strongholds, most importantly Istanbul. Apparently, Erdoğan’s ties with his own electorate has weakened. In addition to this, former Prime Minister Ahmet Davutoğlu and former Deputy Prime Minister Ali Babacan announced that they broke up their connections with the ruling AKP party. This may have resulted in the division of the AKP electorate according to their preference to Babacan, Davutoğlu or Erdoğan. The military operation, therefore, can also be understood as the consolidation of President Erdoğan’s power in domestic politics. The operation, if successfully eliminates the threats, creates an opportunity for Erdoğan to rebuild his supporter base.

President Trump’s decision to withdraw from Syria and Turkey’s military expansion have divided the international community. Some countries, like Syria, Germany, Saudi Arabia, and Sweden immediately condemned the operation. As for the UN, France, Britain, Germany and Belgium called for an emergency session over Turkish aggression in northern Syria on the 10th of October, but no condemnation statement to the Turkish military offensive in northern Syria from the UN has been issued. EU Commission President Jean Claude Juncker demanded Turkey’s military operation to be stopped. The EU is concerned about not only a humanitarian disaster which threatens the Kurdish population but the future of former ISIS fighters detained in the area and waiting in makeshift prisons guarded by the Kurds for prosecution. Most of the ISIS fighters who hold an EU citizenship are from Germany, Belgium, the Netherlands, France, and the United Kingdom, where governments expected that the Syrian and Iraqi states would conduct domestic trials for the ISIS fighters irrespectively of their citizenship. Although some of them were already tried and sentenced, most of them have been waiting in the Kurdish-held prisons. A power vacuum in these territories might lead to the escape and return of these prisoners to their home countries where they would pose a dilemma for the governments on how to pursue with their legal cases. Not all European countries supported the EU’s position. Hungary conditionally supported Turkey’s operation. Hungarian Prime Minister Viktor Orbán stated that Hungary’s national interest was the solution of Turkey’s refugee issue, as a potential migratory wave from Turkey was an immediate threat to Hungary. If Turkey pursues a mission which solves the refugee issue, than Hungary’s national interest dictates to support Turkey with its efforts in Syria.

While in Europe the ISIS and refugee issues thematised the debate on Turkey’s military operation, in the US, it was the political and security communities’ disagreement on the US military’s role in Syria that caused division. President Trump’s condemnation of the Turkish military operations and the issuing of an Executive Order on 14 October 2019, authorising sanctions targeting the Government of Turkey and persons undermining human rights or prospects for peace in Syria, might be understood as President Trump’s backtrack. However, as the US military withdrawal from the targeted territory had been completed, Turkey’s military conduct could not be physically limited by the US anymore. Russian and Syrian regime forces swiftly occupied the army bases and territories previously patrolled by the US. Although President Trump posed as a tough power broker in the last weeks, eventually it was the agreement between Russia (on behalf of the Assad regime) and Turkey that led to the consolidation of military relations in Syria, while the now very limited US military presence had been repositioned to Syria’s eastern border and to Iraq. 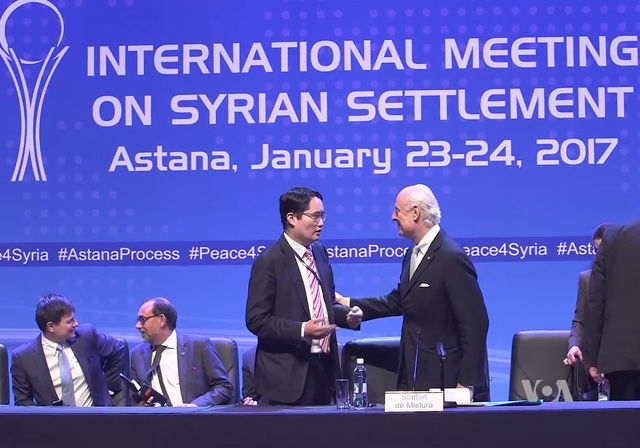 As the result of the recent US, Turkish, and Russian movements, the military balance had been shifted towards the Assad regime, as the latter regained sovereignty over a large part of territories that, in the last five years, had been governed by the Kurdish-led Syrian Democratic Forces (SDF) and the US army. As per the Turkish–Russian agreement, the areas north of the Euphrates are going to be controlled jointly by Turkey, Russia, and the Assad regime. In the current situation, Russia emerged as the number one power broker in many parallel issues in the Middle East. These issues might be altogether discussed under the banner of the “Astana peace process.” By the expansion of the process, Russia might be able to settle a permanent ceasefire in Syria and bring the neighboring countries, as well as most of the Arab and European states, to the table. The success of this process is depending on whether the participants might be able to prioritise the future of Syria over their bilateral issues and whether they are willing to recognise Bashar al-Assad as Syria’s legitimate leader. As we can see, positive signs both for the former and the latter, we might be optimistic regarding the success of the Astana process.