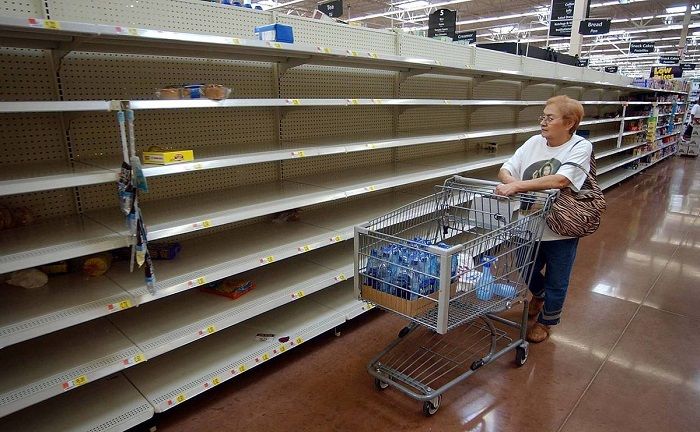 Venezuela, once a boastful proponent of Bolivarian Revolution and the mightiest fortress of the regional left’s pink tide, is now no model to anyone: it is one of the less secure places and weakest economies on the face of the earth. Seemingly, it all boils down to the recent plunge in oil prices. Scratch the surface and you will find that there is much more to it.

It is hard to argue that the Bolivarian Revolution, or else the 21st century form of socialism, as some tend to refer to it, introduced by the late Hugo Chávez in Venezuela after being elected in 1998, is on a successful trajectory nowadays. Its main goals, like achieving popular democracy, economic independence, the fair distribution of revenues, and an end to corruption seem to be falling through for the time being. Nicolás Maduro, Chávez’s heir since 2013, needs to face with widespread protests incited by his failed attempt to substitute the opposition-dominated National Assembly with the friendly Supreme Tribunal of Justice, which the opposition labeled as a coup and the Organization of American States as a self-coup. Although the government walked away from the unpleasant situation it created by reinstating the powers of the National Assembly, the protest did not seem to peter out; quite on the contrary, the conflict now seems to exacerbate causing many fatalities and arbitrary detentions.

Clearly, apart from the so-called “putsch” or whatchamacallit, there might be other things that beset many Venezuelans. Human Rights Watch, for example, has a devastating opinion about general conditions in the country and flagellates it for the lack of freedom of expression, checks and balances and the repression of political opponents and anti-government protests. Beyond the realm of abstract political ideas, most Venezuelans may have more mundane concerns. Their country ranks first on World Misery Index, as it has a run-away, 700-800% hyperinflation and an economy that contracted by 18.6% last year. This translates into shortages of food and medicine that cause nationwide weight loss, a collapsing health care system, and a deplorable public security that makes Venezuela the second most violent nation of the globe which does not wage open war. No doubt, these are no good perspectives for a revolutionary nation. But how on earth has a country which claims to have the largest oil reserves of the world got to this troublesome situation?

The fact of the matter is that they truly have hell of a lot of oil
Source: petroleumworld.com

If one wants to explore the complexities of the Venezuelan economy, he does not have to delve into very puzzling charts: it exports crude oil and refined petroleum and, basically, that is it; these two are responsible for almost 90% of its exports. However, things were slightly different at the time Chávez got into power: back then, oil added to a mere 51% of its exports. In practical terms, it means the deindustrialization of the country, which, apart from the recent decade’s commodity boom, is mainly due to the fixed exchange rates introduced in 2003 combined with the underlying inflation that made import more profitable than production. This posed no problems during the first decade of the new millennium characterized by high oil prices and the resulting economic bonanza. During these years, the government really did a lot for its original goals: reduced poverty (from almost 50% to 32%), unemployment, inequality, and child malnutrition, whereas increased schooling, healthcare, and social spending statistics. 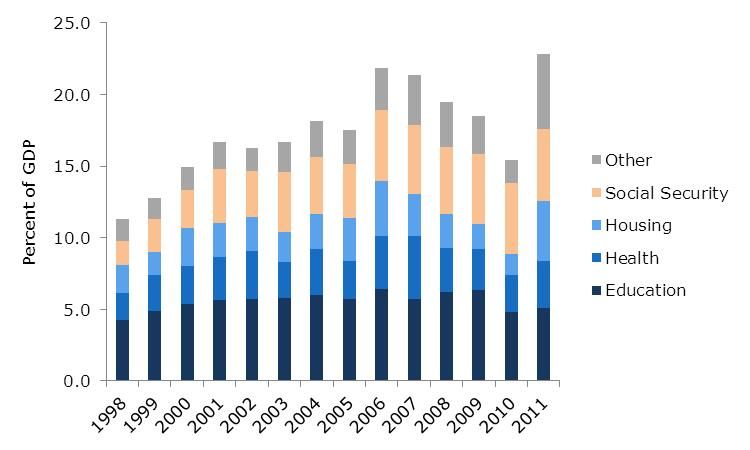 Social spending during Chávez as a percentage of GDP
Source: cepr.net

What Chávez failed to do, however, was to reinvest some money in other economic spheres or the energy sector itself. Not only he failed to do so, but nationalizing several parts of its economy, he did not let others to do it instead of him either. What is more, expropriations also meant the decline of professionalism as most state-led companies are making massive losses. This is clearly demonstrated by the state-owned oil company PVDSA (Petróleos de Venezuela S.A. – Petroleum of Venezuela): in 2003, after a strike against the Venezuelan government, Chávez fired 18.000 employees—40% of its actual workforce, including 80% of the research team—from the firm. This affected the company’s exploration figures substantially. From that time forward, the personnel working for the company has swelled so rapidly that is also noticeably contributed to the company’s dropping productivity. 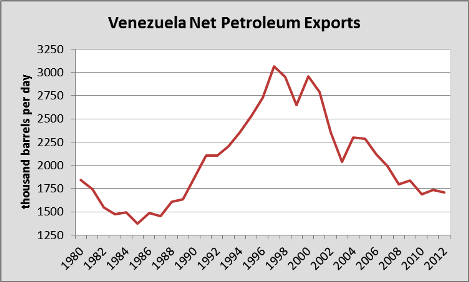 It is no hard job to spot the drop
Source: oilprice.com

Apart from spending on social measures, Venezuela also lost money on giving subsidized oil to his socialist kin, Cuba, and other neighboring countries via its oil alliance, Petrocaribe. High corruption also cost Venezuela a lot as, according to some estimations, one from every three dollars goes to lubricating the corrupted regime. It means that in the course of the last decade the country lost $300.000 million from its oil revenues amounting to more than $900.000 million. During the era of low interest rates, the Venezuelan government drew on cheap loans to finance its policies, and, again, during the era of low oil prices, it also fell back on its creditors, mainly China and Russia, to keep the ball rolling. And nowadays, it does not seem to hesitate to repay its oil-for-loan credits, even if it cannot buy food for its citizens as lower oil prices require that a higher portion of its only exportable good, oil, be sent to the creditors.

All matters being considered, the main problem is not the drop in oil prices, but that during the “seven years of abundance” the country only invested in social policies, and did not bother to endorse diversification, productivity, R&D and the like. It did not even put money back into its cash cow, PDVSA, which now, during “the seven years of famine”, is incapacitated to counter low oil prices by, for example, increasing the volume of its output. Actually, for the lack of much needed investments, the company is even struggling to make business as usual. On the other hand, the Venezuelan state even borrowed money from abroad and canalized it to fulfill its social aims instead of beefing up national economy.

Now, artificially low consumer prices, the lack of home industry, and the main export product, oil, used to pay back loans, leave the country with no consumer goods at all because—due to the perversely low state-controlled prices—the demand is way too high, while there are neither producers to satisfy it nor enough oil to buy goods abroad. With no manifest intentions to change its economic trajectory, Venezuela can only pray for an upsurge in oil prices to get a second wind.

As the notorious “pink tide”, the 21st century left-wing enterprise in South America, is now losing ground in the region, and so, Venezuela’s main allies are evaporating, the million dollar question is if the oil price shock, that has already revealed many deformities of Venezuela’s economy, can deliver coup de grâce to the ailing government and make the pink tide reach its lowest.