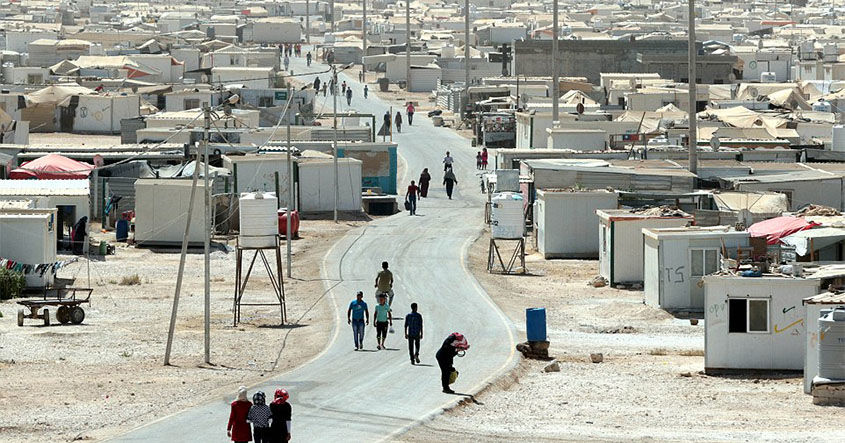 The Trump Administration's Take on the Foreign Assistance Regime

Foreign economic assistance, a long-time American foreign policy tool, may now be on the way out. The Trump Administration has just announced previously unheard-of cuts in U.S. overseas commitments, and is expected to embark on different kinds of foreign endeavors in the near future. Does this trend represent a return to normalcy after the soaring numbers of the past eight years, or are they hailing the dawn of a whole new era? Is it declinism to say that the U.S. is now voluntarily disarming its own soft power arsenal?

Ever since President Truman announced the Marshall Plan and later the Point IV Program, foreign economic assistance has been a major device in the U.S. foreign policy toolbox. There were two very distinctive categories of recipient countries, which everyone could recognize—though distinctions, of course, were implicit. There were countries that got serious amounts of money and sophisticated weaponry (typically Western allies and strategically important but ailing states), and those who received limited money and “technical assistance”, i.e. mostly know-how (recently decolonized states). 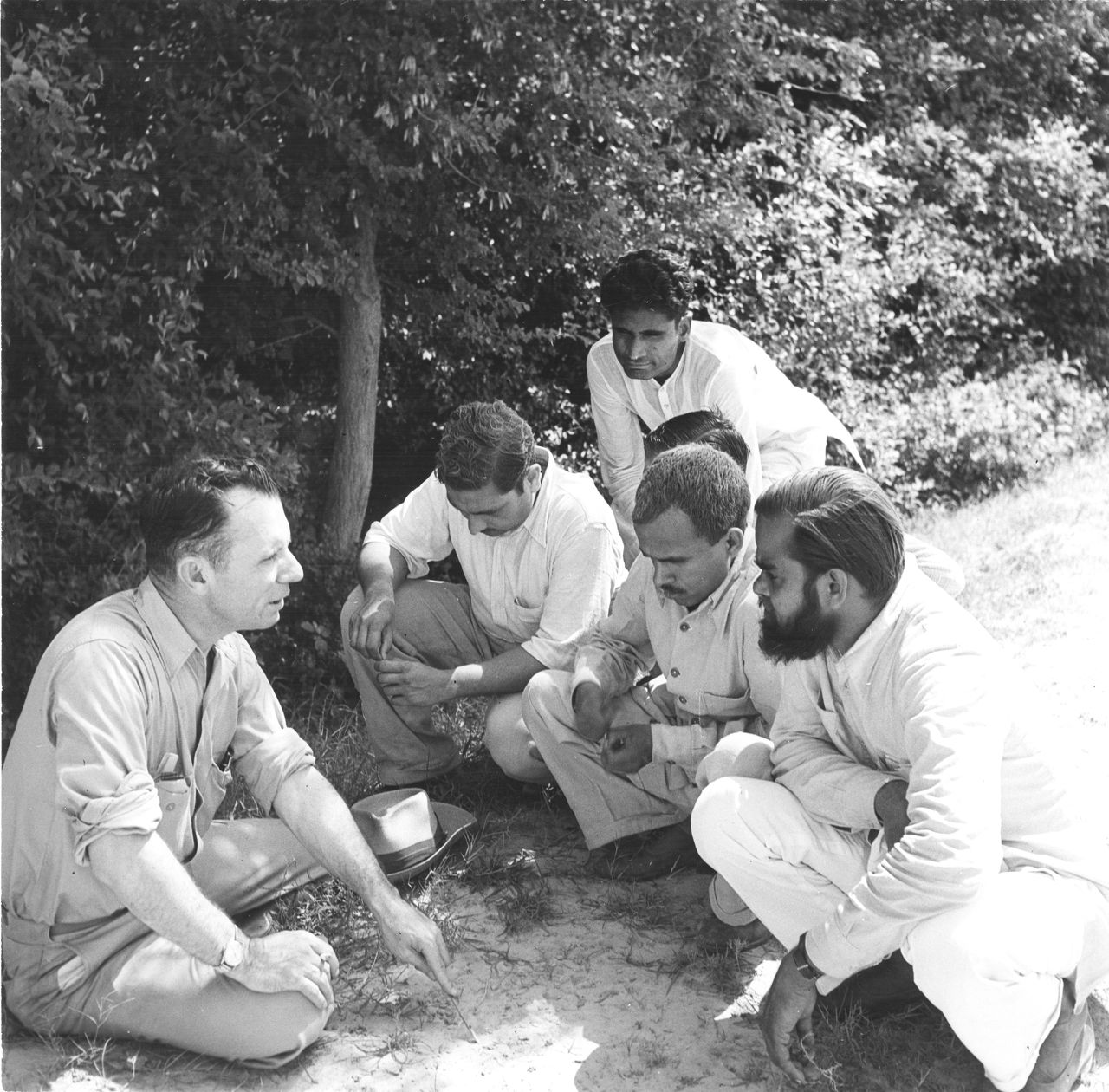 With the creation of NATO and with other rings of alliances (Rio Pact, SEATO, ANZAC, Bagdad Pact/CENTO), the number of strategic investments reached new highs. The fact that both superpowers as well as China reached out to newly independent states added to the number of countries that were considered worthy targets. Though the figures of American foreign assistance were relatively consistent through the years between 1965 and 2000, with only minor tides and ebbs, the amount reached 1953 levels in 2012. The circumstances, though, were different: in 1953, with the Korean War finished and Stalin dead, the numbers were quickly decreasing, while in 2012, they were still on the rise. What is more, the largest contributor to the United Nations, itself busy with addressing poverty and peacemaking, is still the U.S. with over 22%. In defense of the recent cuts in the State Department spending, Secretary of State Rex Tillerson has cited “historically high” figures of the past year as well as their “unsustainability”. For a detailed mapping of the foreign assistance regime, check these infographics from the Washington Post. 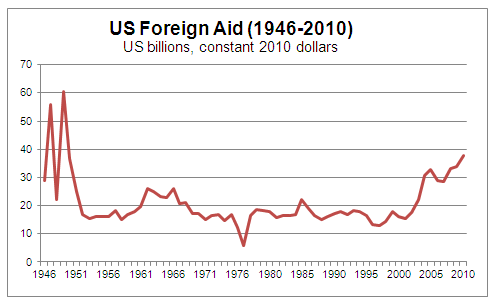 U.S. Foreign aid throughout the Cold War and after
Source: consultantsmind.com

Now, the Trump Administration, pretty much in line with their announced “America First” blueprint, has embarked on a serious streamlining of State Department spending that includes foreign aid (see the impact on the proposed budget in charts). Moreover, foreign aid, coupled with U.N. funds and climate change actions, serves as easy target for those who are interested in quick gains. There is a set of questions that arise, though. Foreign assistance is traditionally two-pronged, as an almost equal amount of the whole budget appropriation is either development aid or security aid. Now, it is not the entire regime of foreign assistance that was questioned, and as military spending will likely to climb higher in the coming years, it is safe to say that some cuts in humanitarian aid can later reappear as security aid. In such a case, the target countries and issues are not necessarily located on a “lose some – don’t lose” spectrum, but there are possibly outright winners and losers. So, who are they?

If you are interested in a very detailed interactive world map of allocations of foreign assistance, visit the following State Department site.

We know that the State Department cuts will mostly affect foreign economic and humanitarian assistance, while, it is very likely that both arms sales and security assistance would continue to rise. There is no country that would be a major beneficiary of all three kinds of aid—i.e. economic and humanitarian assistance and arms sales, respectively. However, a few countries stand out for the amounts flowing in two of the above categories. Afghanistan, though only a minor buyer of U.S. arms, is one of the biggest beneficiaries of both economic and security aid. Israel, on the other hand, doesn’t receive economic aid, but is a major partner in both security aid and arms deals. Jordan also stands out as a country that isn’t currently engaged in warfare or “nation-building”, while still being a major beneficiary of foreign economic and security assistance. Clearly, the country is supported in its role as a “bulwark” against Islamism and as a sanctuary for asylum-seekers pouring from the neighboring territories. In security assistance, Egypt, Iraq, Pakistan, Lebanon, and Colombia also fare well. On the other hand, major targets of economic assistance include Pakistan and a set of East African countries like Kenya, Nigeria, Ethiopia, Tanzania, and also Zambia. 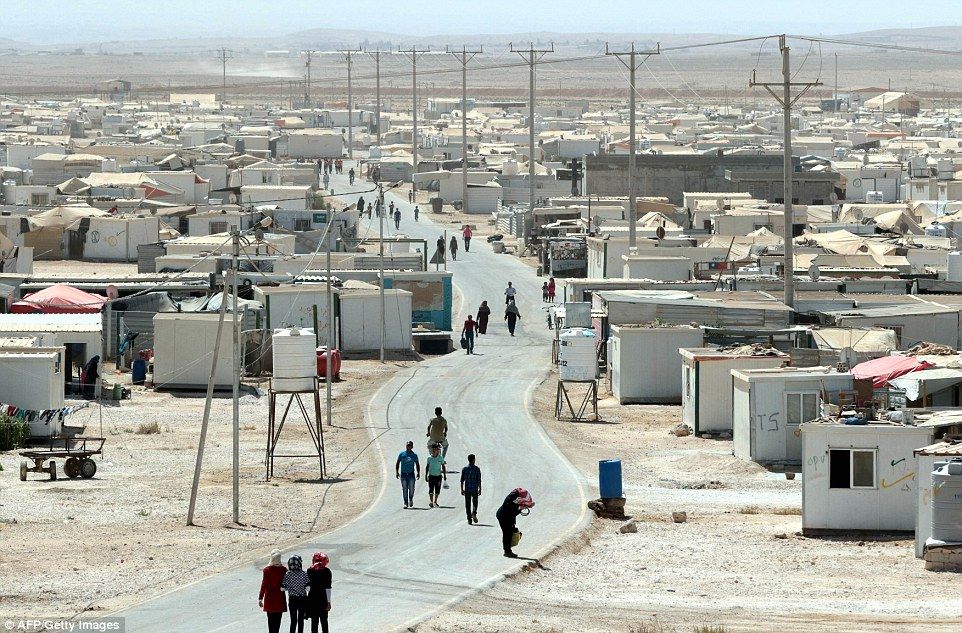 As mentioned above, it’s not unsafe to say that the Trump Administration will possibly divert focus from questions of purely developmental or humanitarian concerns to strategic issues. In numbers, this is likely to mean that Africa, the United Nations Peacekeeping (also mostly located in Africa), and the World Bank would lose resources, while territories deemed strategically important, especially in Asia and the Greater Middle East, maybe Mexico and Colombia, could “level up”. The only purely humanitarian program that stays largely untouched is interestingly the President’s Emergency Plan for AIDS Relief Program (PEPFAR), which is, of course, also related mostly to Africa. An often overlooked loser can be Ukraine, which receives some 70 million dollars in security assistance (likely to remain) but three times as much in development assistance (likely to drop). Also, the Eastern European country is not among the arms deal partners of the U.S. and is not likely to become one in the future.

Could the downscaling of foreign assistance be a signal for an American withdrawal from the soft power arena? Many argued (Republicans here, Democrats here, both of them also here or here) that the aid cuts are indeed self-inflicted wounds. They would seriously harm U.S. interests around the world and earnestly diminish the country’s capacity to influence actions and decisions on a global scale. Even Republicans, members of Congress, stand firmly against the cuts, from Marco Rubio to John McCain and Lindsay Graham, not to mention some notable outsiders like Bill Gates or New York Cardinal Timothy Nolan. For humanitarian or power projection reasons, an unexpected amount of people reject the Trump cuts, so the budget bill is not expected to survive the Senate debate—at least, not in its present form.

Earlier, during the campaign, Trump wowed to “stop sending foreign aid to countries that hate us and use that money to rebuild our tunnels, roads, bridges and schools.” Does it mean that America turns away from soft power to hard-or-nothing approach? It is not easy to tell, especially before the congressional debates. It appears certain, however, that soft power is not only based on budget appropriations. Soft power is, and has always been, a portfolio that was made up by the U.S. government, private entrepreneurs, foundations, NGOs, as well as cultural endeavors. In other words, the Ford Foundation, Hollywood movies, interuniversity cooperation, AfriCare could do most of the job even without government funding. In this respect, it is also indicative that the American government does not appear to be lenient about the recent Hungarian legislation that could harm the interests of the Central European University in Budapest. In this framework, though foreign assistance might be cut, soft power tools, like universities and companies, would not be renounced.

Even if soft power is clearly not completely renounced, scaling down the amount the U.S. spends on foreign development could seriously alter the geopolitical environment. No one seriously forecasts even a limited American disengagement from East Asia or the Middle East, but there could be some serious ramifications in Africa and Latin America, both of them facing massive Chinese investments and strategic inroads.