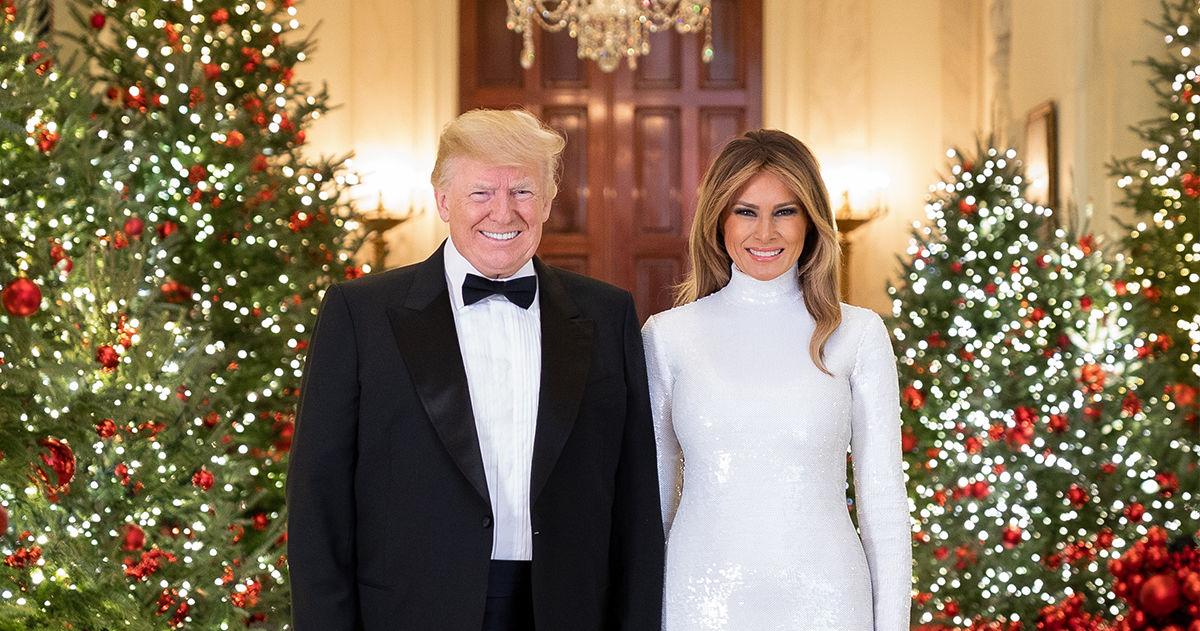 Ever wonder where the “War on Christmas” comes from—and who is winning?

People are proud to be saying Merry Christmas again. I am proud to have led the charge against the assault of our cherished and beautiful phrase. MERRY CHRISTMAS!!!!!

To hear Donald Trump tell it—in tweets like the above and, more recently, at a conference by the Faith and Freedom Coalition—it is thanks to him that people in the United States are not only saying “Merry Christmas” again but even department stores have reversed their policy of preferring “Happy Holidays” on their signs and in staffs’ greetings to customers. At this point, it would be hard to deny that the President has a remarkable salesman’s intuition when it comes to delivering simple but effective one-liners (“build a wall,” “lock her up,” “witch hunt,” etc.) that reinforce pre-existing sentiments in voters in an effort to build up a firewall against opinions and facts that weaken politically profitable reflexes. However, he also often claims undue credit for the substance of the message, which can lead people to ignore the feedback loop between the President and media outlets/well-positioned culture warriors that have been trying to fine-tune and spread these messages since long before the real estate mogul figured out he was a Republican. One example of this is the so-called War on Christmas, in which the President’s role has in fact been relatively minor.

But how did the American society end up at a point in the culture war where holiday greetings are a way of choosing and assigning sides? The modern-day alarmism regarding alleged attacks on Christmas can be traced all the way from Henry Ford, who, in the 1920s, placed the idea within a broader anti-Semitic conspiracy theory in which Christianity itself was under attack, through the red-scare-tinged hysteria in the midst of the religious revival of the 1950s, to highly influential former Fox News host Bill O’Reilly, who, in the mid-2000s, elevated the recently coined phrase “War on Christmas” to the prime-time cable news slot, making it a staple of the network’s holiday programming in subsequent years. On air, O’Reilly presented the War as a leftist–liberal conspiracy aiming to undermine the country’s fundamental Judaeo-Christian values in order to make room for “gay marriage, partial birth abortion, euthanasia, legalized drugs, income redistribution through taxation, and many other progressive visions.”

The diagnosis may have been misguided, but the past couple decades can indeed be fitted into a narrative of a diminishing role for Christianity in American public life. The 1980s, for example, saw a series of Supreme Court decisions that greatly contributed to the secularisation of public spaces: Stone v. Graham (1980) declared that posting the Ten Commandments in public schools is unconstitutional, Wallace v. Jaffree (1985) held the same about an Alabama statute authorising a “moment of silence” for meditation or prayer in all public schools, Edwards v. Aguillard (1987) banned “creation science” as an alternative to evolution in public school curricula, while County of Allegheny v. ACLU (1989) laid out the unconstitutionality of erecting a nativity scene on public property.

Since the 1980s, such strides towards the secularisation of public life (and, to a lesser degree, the inclusivity of the holiday season) have largely given way to minor scandals involving corporate communication. One of the most recent controversies involved Starbucks and its choice to take explicitly Christmas-related imagery off its holiday cups, and large retail chains such as Sears, Kmart, Kohl’s, Wal-Mart, Target, and B.J.’s that have opted to use “Happy Holidays” instead of “Merry Christmas” in their advertising and in-store communication have also been singled out in right-wing media, most notably by O’Reilly and, lately, President Trump, as accomplices to the effort to use political correctness to dilute the religious aspects of Christmas and diminish its role among the several end-of-the-year celebrations. The conservative backlash was not without consequence. In 2006, O’Reilly actually declared victory in the War on Christmas, as several chain stores responded to pressure by pundits and Christian groups, such as the American Family Association and the Catholic League, by reinstating the use of “Merry Christmas” in their marketing and PR efforts. 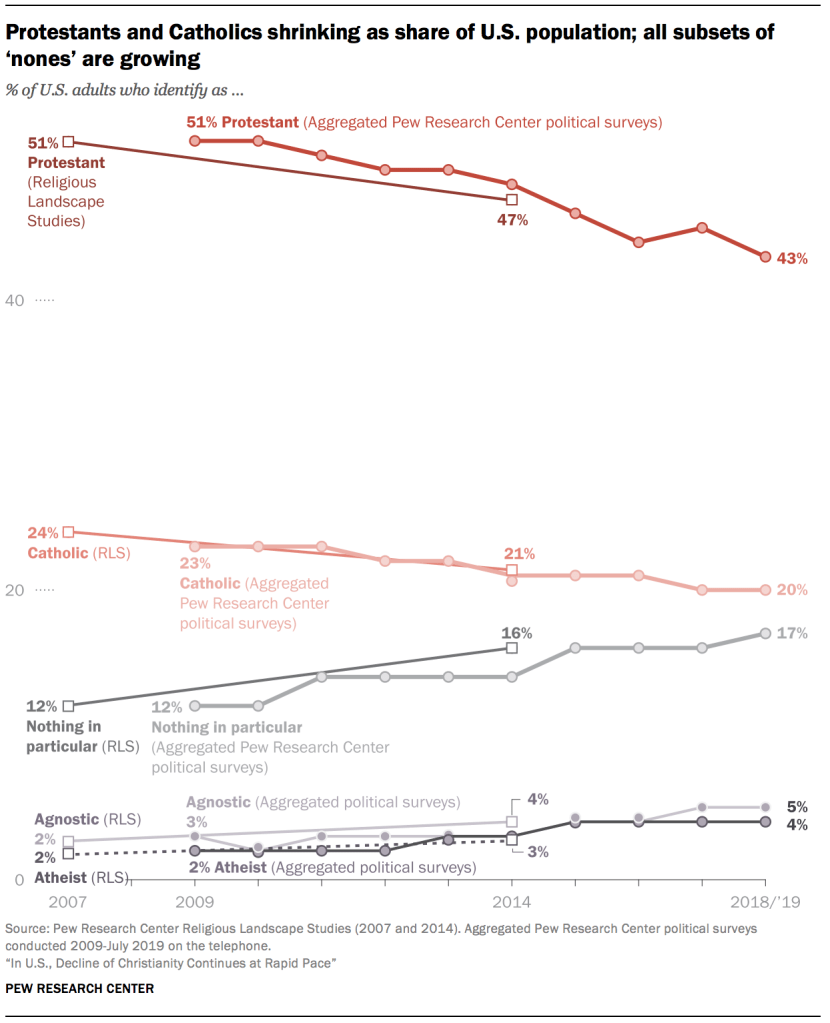 However, it was a small victory in the grand scheme of things. Beyond zeitgeist-attuned corporate communication and anxieties regarding the nature and momentum of cultural change, the relevant tendencies tell a story that is less bombastic but very consistent in its direction. In short, while the United States remains a remarkably religious culture among the world’s developed nations, this is less the case every year, especially when it comes to Christianity. Sixty-five percent of the population still describe themselves as Christian, but this represents an over-ten-point drop in the last decade, compounded by a similarly remarkable growth in the number of those who describe themselves as “atheist, agnostic, or ‘nothing in particular,’” as well as figures showing a dramatic increase in these trends from older to younger generations (in addition to a growth in non-Christian faiths). Besides, fewer Americans than ever think that religion can provide an answer to modern problems and that it has a place in politics. And, finally, to get back to the War on Christmas, it seems that, while preferences between seeing “Merry Christmas” and “Happy Holidays” in stores have shifted somewhat (43% to 32% and 12% to 15%, respectively), the majority (52%) simply do not care one way or the other.

By this point, so much has been written about the many ways in which the United States is becoming more diverse that the above should come as no surprise even to casual observers. The smaller, less talked-about story that is unfolding under the guise of an alleged War on Christmas is, to borrow the best description of the phenomenon I have encountered, “a symbolic protest against a perceived loss of privilege” on behalf of the Christian right. The country is not only becoming less white, Anglo-Saxon, and Protestant, but such people have less sway over the many aspects of public life than before. As all signs indicate that this tendency is to continue in the future, people will no doubt come up with similar expressions of related frustrations. Meanwhile, others will simply get with the program—even if only because it makes business sense. Need proof? Visit the online Trump Store’s “Holiday Gift Guide,” and search the page for “Christmas.”