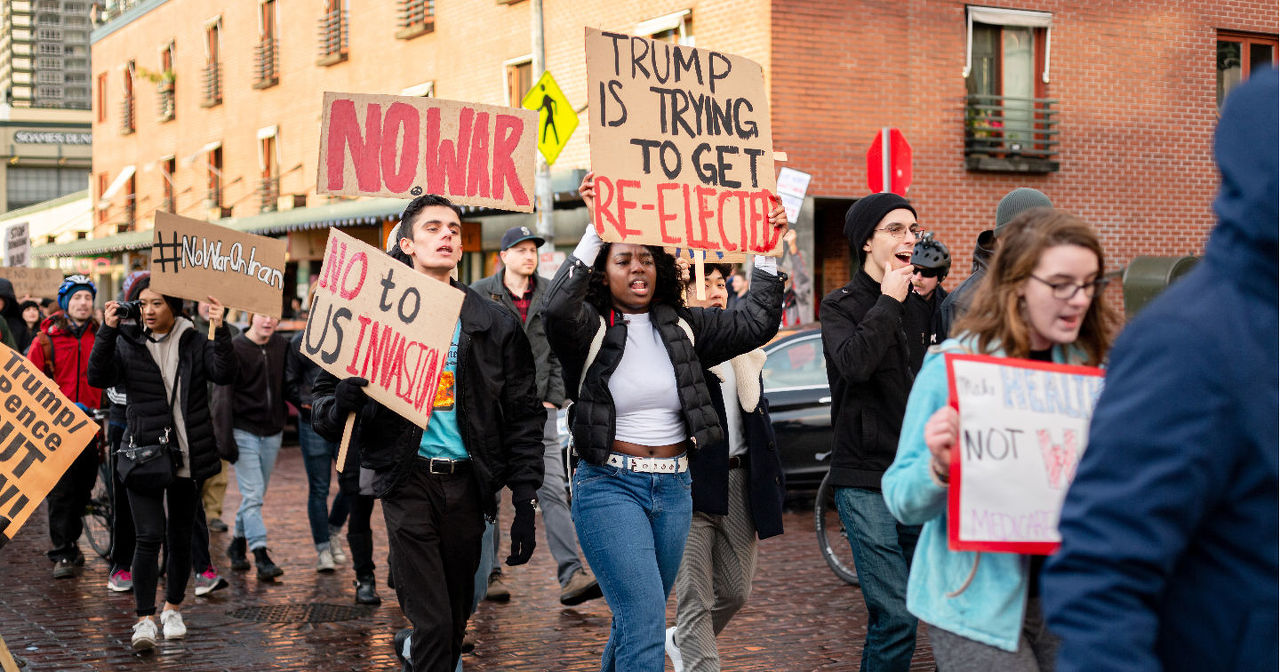 The US is looking at another unpredictable election year. How would a war with Iran reshuffle the deck?

We are a couple weeks into the newly heightened conflict between the United States and Iran in the wake of the killing of Quds Force commander Qasem Soleimani by drone strike, an Iranian retaliatory missile attack on US bases in Iraq, and the accidental downing of a Ukrainian commercial flight by the Islamic Republic. The modern news cycle and its feedback loop with social media (as well as President Trump’s remarkably consistent policy of publicly contemplating armed interventions) may make it seem like any degree of escalation might be on the table—and it is certainly too early to make predictions with confidence—but recent developments, including the President’s address regarding the situation, make it seem like both sides would prefer to avoid an all-out war. But let us say tensions escalate to a point where war with Iran becomes an immediate possibility. What effect could such a situation have on a presidential race that promises to be just as unpredictable as the last?

The temptation for the President to engineer a distraction going the 2020 campaign is understandable. His job approval numbers are consistently and historically low, and the majority of voters appear to support his impeachment, with details of the process having dominated the news lately—until the killing of Soleimani, that is. Trump also lost the popular vote in 2016, and it was by a very narrow margin that he managed to secure an Electoral College win. However, it should also be noted that the President is not badly in need of a distraction: the US economy remains strong and stable, with earlier fears of a recession this year having given way to a more optimistic outlook, and his approval among Republicans remains high.

If polling is anything to go by, recent events have done little to shake up the race. Sure, headlines such as “Majority of Americans disapprove of Trump’s handling of Iran, feel less safe after strike” suggest that the escalation of the conflict is hurting the President’s chances at re-election, but when broken down, the data reveals the same old entrenched partisanship that led Trump to note at one point that he could shoot somebody in the middle of Fifth Avenue and he still would not lose any voters. Indeed, 87% of Republican respondents in the above poll approved of the administration’s handling of Iran, and 54% of them claimed to feel safer in the wake of recent events. Meanwhile, independents, who both parties hope will end up swinging key states and electoral votes towards them, landed slightly (57%) on the “disapprove” side of the opinion scale.

War was a considerably more popular option before the launch of Operation Iraqi Freedom in 2003 than it is now, and, even then, it did not enjoy overwhelming support for the most part (52-59%) in the lead-up to the March intervention. Meanwhile, a poll published back in September 2019 found that about three quarters of Americans (including most Republicans) held that the US should not go to war with Iran, which was echoed in a previously mentioned poll released in January 2020, according to which 73% of respondents reported being “somewhat” or “very” concerned about the possibility of a full-scale war.

Moreover, one of the first lessons of 2003 is that public support for armed conflict is partially contingent on international consensus. Even at the height of pro-war fervour, support for the move would drop by as much as 11 points (to 47%) when people were asked to consider a scenario where the administration did not seek a final vote in the UN Security Council. As of the writing of this piece, Trump lacks any substantial foreign support with regard to his sword-rattling with Iran: Canadian PM Trudeau partly blamed US escalation for the accidental downing of a Ukrainian jetliner, and even as France, Germany, and the UK triggered the “dispute mechanism” of the JCPOA against Iran, they pointed out that they were not joining the US’ “maximum pressure” campaign.

Political calculation involving war is usually based on the “rally ‘round the flag” effect. Part of the narratives of a variety of cases, from the Cuban Missile Crises to the Bushes’ Middle East interventions, it is used to describe the boost in popularity that presidents experience in the immediate wake of a crisis or declaration of war due to unifying effect such times have on the public. Among others, it helped both Bushes improve their standing with voters. As the example of the Gulf and Iraq Wars shows, such a decision can—and tends to—break the rather sharp partisan divide discussed above: at one point, Bush 41 had a 72% approval among Democrats, and even his son (and his war) enjoyed the backing of the majority of the opposition party’s sympathisers. 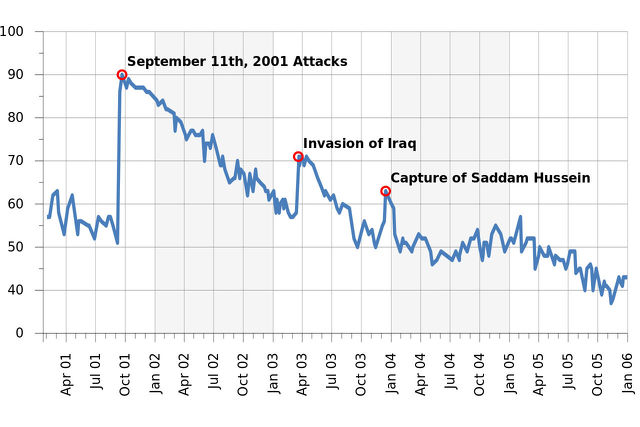 Of course, as we all know, none of it would last. Bush 41 lost the 1992 election, and, while 43 did win in 2004, both him and his Middle Easter adventure ended up becoming wildly unpopular—and, by then, the standard partisan divide had long been restored, with only Republicans keeping up any semblance of an approval bump. The signs were there from the get-go: a Gallup poll found that around half of the people who claimed to support the war did not “demand” it, while the Los Angeles Times found that only about one in ten people credited the President’s handling of the war with their positive assessment of his job performance. For Trump, the details appear to be hiding similar devils: even when a surprising majority (70%) says that they would support sending US troops to “stop Iran from obtaining nuclear weapons,” with more specific questions on what such a commitment would entail, that number drops to as much as 40%. 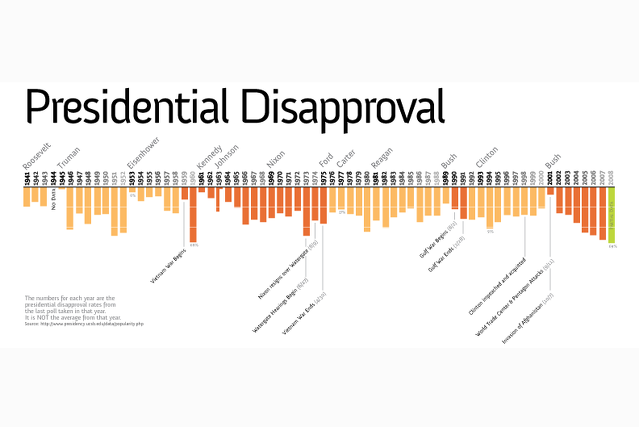 The question, then, is if and when such specifics would overpower the White House’s narrative. The “rally ‘round the flag” phenomenon has been demonstrated to be a rather consistent side-effect of wars and crises such as the September 11 attacks, but, in every case, its nature and afterlife are determined by a multitude of factors, many of them difficult to anticipate and measure. But being able to position it as the rational, even necessary response to an attack such as 9/11, or at least as a pre-emptive move to eliminate a major threat, certainly makes war an easier and more politically profitable sell, and, accordingly, the Trump administration has claimed that Soleimani was an “imminent threat”—only to end up struggling to demonstrate that this was indeed the case, which evokes less-than-desired echoes of the Iraq War and Iraq’s alleged weapons of mass destruction. In 2004, the conversation about the Iraq War was still in a stage that allowed George W Bush to get re-elected, and only later did the conflict turn into the political and military quagmire that it is regarded today.

With massive and seemingly unconditional Republican support, Trump has reason to think that he can not only get away with military adventurism, but might even reap considerable (although potentially short-term) political benefits. Timing would clearly be crucial—as well as nearly impossible to calculate with confidence.