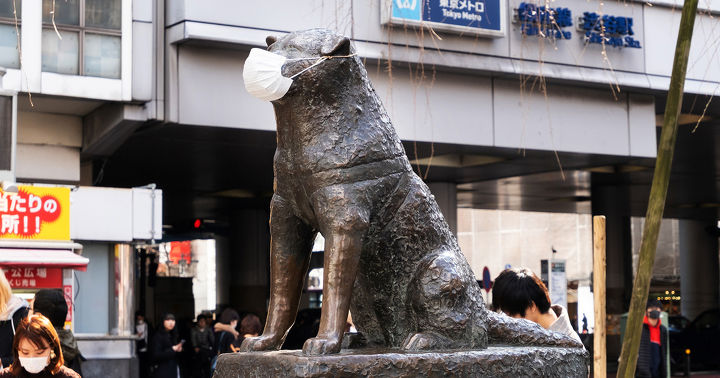 Where to Now, Japan?

The Effects of the Coronavirus in the Island Country

Like many other countries, Japan is also feeling the strong winds of economic recession. So far, the coronavirus (COVID-19) pandemic did not take as many casualties in the island country as in our distant neighbour Italy, but its example shows the economic downturn does not depend on the number of infected. Thus, the fate of the upcoming Summer Olympics may be even dicier. What will the future bring to the country that has been trying to avoid economic recession anyway?

As of 23 March, Japan has 1,101 people infected and 41 killed because of the coronavirus. The data mostly come from local governments, but it is important to bear in mind that, despite the WHO’s urging, the Japanese government does not always conduct sufficient amount of tests, so the real figures could be much higher. In order to curb the spread of the virus, Prime Minister Abe Shinzō had already ordered the closure of primary and secondary schools on 27 February (although he had officially used the word “suggestion” at the time of announcement), which was followed the next day by a statement from the governor of Hokkaidō Prefecture declaring a state of emergency and ordering the populace to stay at home on the weekends. It is no coincidence that out of the 47 prefectures, Hokkaidō was the first to take these measures, as Japan’s most popular winter festival, the Sapporo Snow Festival, which is attended by nearly three million people a year, is suspected to have been responsible for the spread of the coronavirus. Although the number of Chinese tourists has fallen this year due to the emergency in their home country, the event in 2020 also attracted 2.02 million visitors during the period between 31 January and 11 February. The government responded to the situation in early March by calling on mask manufacturing companies to sell their stock to the state so it could redistribute it in Hokkaidō’s most infected areas. Despite the prominent role of masks in the everyday life of Japanese society, a serious shortage unfolded in the island country after the lockdown of Wuhan Province in China.

The spread of the disease notwithstanding, on 4 March, President of the International Olympic Committee Thomas Bach reaffirmed his determination not to postpone or cancel the Olympics. The question remains: why? Only four months are left until the start of the Summer Olympics, and most experts believe that the pandemic will most probably continue for months, not to mention that such a global sports event with empty stadiums simply makes no sense. Several athletes have expressed their frustration that the committee is jeopardising their health by holding the games—never mind that of the audience. Almost all other summer events, festivals, concerts, and sports tournaments have been cancelled; still, preparations for the Olympics seem to go ahead as scheduled. Naturally, that is in Japan’s best interest, as the fate of the Japanese economy is heavily dependent on the revenue generated by the Olympics. Until the outbreak of the virus, the Olympics was considered the only safeguard against economic recession.

In many countries, including Hungary, social distancing, which has a key role in stopping the virus, has already damaged the restaurant business and small enterprises severely—and Hungary is still expected to take months to stop the virus. For the same reasons, on 7 March, the Japanese government announced that it would start to support small- and medium-sized businesses affected by the virus through a special program with interest-free loans without collateral. Meanwhile, the Nikkei index is down more than 1,000 points on the stock market, reaching an unprecedented low in fourteen months. At this point, the pandemic has disrupted trade, supply chains, and tourism so severely that the country came dangerously close to a recession, even though it was not too long ago that it managed to emerge from a more than two-decades-long slump under the leadership of the current Prime Minister, Abe Shinzō. This situation is exacerbated by the fact that the increase of consumer tax introduced last October (from 6% to 8%) has already somewhat reduced consumption. Due to the virus and the falling demand, many manufacturers are forced to close their factories in China and turn to Southeast Asian countries. This, of course, is not a new trend: With China’s economic advance, the cost of labour has increased so much in recent years that Japanese companies chose to build new production centres in Vietnam and Thailand; however, the long-term impact of the pandemic cannot necessarily be negated by these steps alone. The Japanese economy has already shrunk to an unprecedented level—last seen six years ago—in the last quarter of 2019. So what’s to come next quarter? Albeit—according to official data—the spread of the virus currently under control, the cherry blossom–viewing period, when the entire Japanese society goes out to the nature to watch the blossoming, is about to begin. Although the Japanese government promotes the practice of social distancing, official figures can create a false sense of security—as it is already evident in the rate of commute in the Tōkyō subway and similarly busy public spaces. Hokkaidō ceased its state of emergency on 19 March, which will undoubtedly result in relaxation of anti-spread measures. Holding the cherry blossom viewing would, therefore, have a disastrous effect on the spread of the virus, which is why the fate of the economy in Japan, just as in many other infected countries, will depend on the responsible behaviour of the society.

You can find up-to-date information on the Japanese coronavirus situation in English at the following link: https://www.mhlw.go.jp/english/.