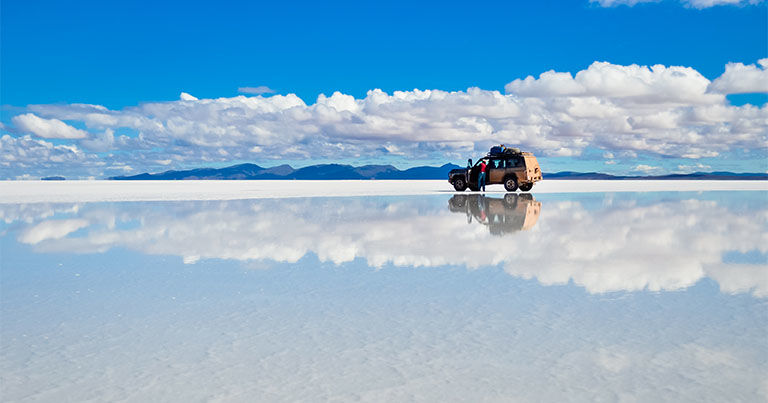 Will the new gasoline bring the Eldorado to Lithium Triangle?

Lithium is indispensable not only for providing energy for handheld devices that are increasingly becoming part of our everyday life, but, seemingly, also for the automobile industry of the next decades. This lends importance to three Latin American states that have significant reserves of this metal: Argentina, Bolivia and Chile. The very question of the future, however, is whether these countries can make the most of the possibilities buried underground.

The lithium, discovered in the early 19th century, has become increasingly important to industrial production since the middle of the 20th century. Although its capacity for energy storage was discovered back in the 1970s, it was no earlier than in the 1990s that it started to gain significance in this field, after Sony had launched its first lithium-ion battery onto market. From there on, lithium-based technology, which needs smaller space and stores more energy than its other counterparts, were quick to conquer the market of handheld devices. Its significance in this sector is expected to stay unbroken, as the market of smartphones and other mobile electronic devices has still a lot of room to expand.

Anyhow, the 50% increase in contract prices and the 300% increase in spot prices between 2015 and 2016 are mainly due to the global market runup in electric vehicle production and not to mobile phones and the like. This tendency is lucidly demonstrated by the North American Tesla affirming to raise a factory capable of providing batteries for half a million cars per year and by the Chinese government claiming to lead EV (electric vehicle) market by 2030. To show the lithium demand in the wake of the new industry, suffice it to say that, according to analysts, the Tesla Model S, one of the best sold electric cars throughout the word, needs 63 kilograms of lithium for its battery. This is 10,000 times more than the lithium used in an average cellphone.

To serve this catapulting demand, lastly, the reserves of the new raw material, bombastically called “the new gasoline”, has become focus of attention. Today, its production is dominated by four countries: Australia, Chile, Argentina and China. But if one takes resources instead of production into account, it is conspicuous that 50 to 85% of the global lithium rests in the lithium triangle that straddles Chile, Argentina and Bolivia. The importance of this area that embraces the salt flats of the Bolivian Uyuni, the Chilean Atacama Desert and the Argentinean Hombre Muerto is clearly revealed by the fact that, nowadays, the press often refers to it as the Saudi Arabia of Lithium, since, according to some analyst, it will be as important in the production and price setting of the “future gasoline” as the Arabic country has been as far as the oil is concerned. Yet, the three countries are not in unison about their future policies. 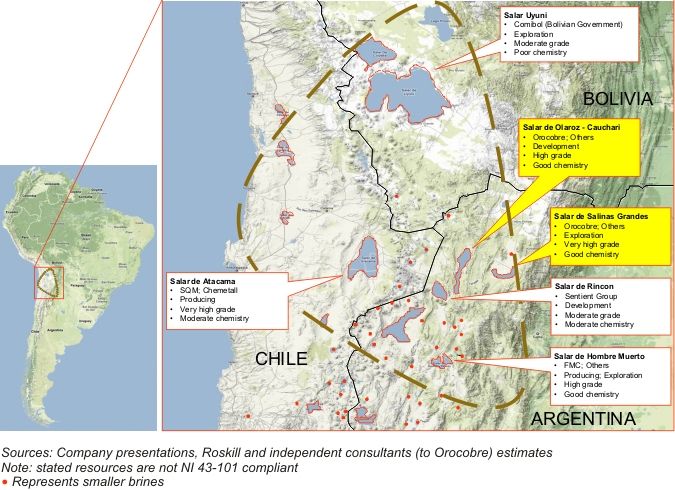 The whereabouts of the lithium triangle
Source: hir.ma

Among these three countries, lithium extraction has the greatest tradition in Chile, the most market- and investment-friendly state in the region. That is also reflected in the high production rates the country yields. Apart from the favorable business climate there, the climate of the Atacama Desert is also perfect for the cost-effective production: the arid lands make lithium evaporation from big pools utterly low-priced (unlike in other countries, in the lithium triangle this metal can be extracted from brine and does not need mining). Moreover, due to the region’s rainlessness, there is no need to worry about humidity affecting the otherwise highly reactive alkali metal.

In spite of these advantages and the vast reserves of the country, Chile’s production is dropping behind the good figures yielded by its competitors. One of the reasons behind this is a law from 1979 that defines lithium as a strategic material and therefore bans its concession and sets a quota for its production. This constrains the operations of the two main producers in the county: Sociedad Química y Minera (SQM – Chilean Chemical and Mining Company), a national company privatized during the 1980s, under the military dictatorship of Augusto Pinochet, and the North American Albemarle Corporation.

For the time being, SQM might lobby for appeasement, but only in vain, since its owner, Julio Ponce Lerou, who has strong family relations to Pinochet and is involved in illegal stock trading practices, is a thorn in nowadays politicians’ side. To make things even worse, last year it turned out that SQM had paid kickbacks to most of the political elite. What is more, the company was also threatened by the government that its lithium extraction licenses could be withdrawn. In the meantime, Albemarle’s authorized lithium quota was increased, a decision almost instantaneously attacked by SQM. The national company also announced as a counterpunch to start operations in Argentina, Chile’s main regional rival for lithium preeminence.

Many otherworldly places at Atacama Desert has not seen a single raindrop for 400 years
Source: Shutterstock

Be that as it may be, Chile’s share in global lithium production seems to be mired in the mudwrestling, while many even doubt whether the country’s lithium-strategy is appropriate, rather proposing the creation of some kind of lithium-based national industry instead of the immediate exportation of the unprocessed metal.

In the meantime, owing to Mauricio Macri’s market-friendly attitude, investors, hitherto alienated by the former President’s voluntarist policy, are starting to flock around lithium business in Argentina. Prognoses say that by 2020, Argentina, that possesses the same makings as Chile but has a better quality lithium, may be responsible for providing 50% of the world’s whole lithium output. However, in the country, which rapidly liberalizes its mining regulations, the increasingly firm dissident voices say the state should not allow foreign capital to dominate the extraction of this very important raw material. They would also help local enterprises to embark on lithium exploration, extraction and industrialization. However, nowadays, the only legal limitation on the extraction managed on a provincial level is a 3% royalty, and there are no regulations to defend indigenous communities, their homes and water supply from the consequences which mostly remain to be seen. 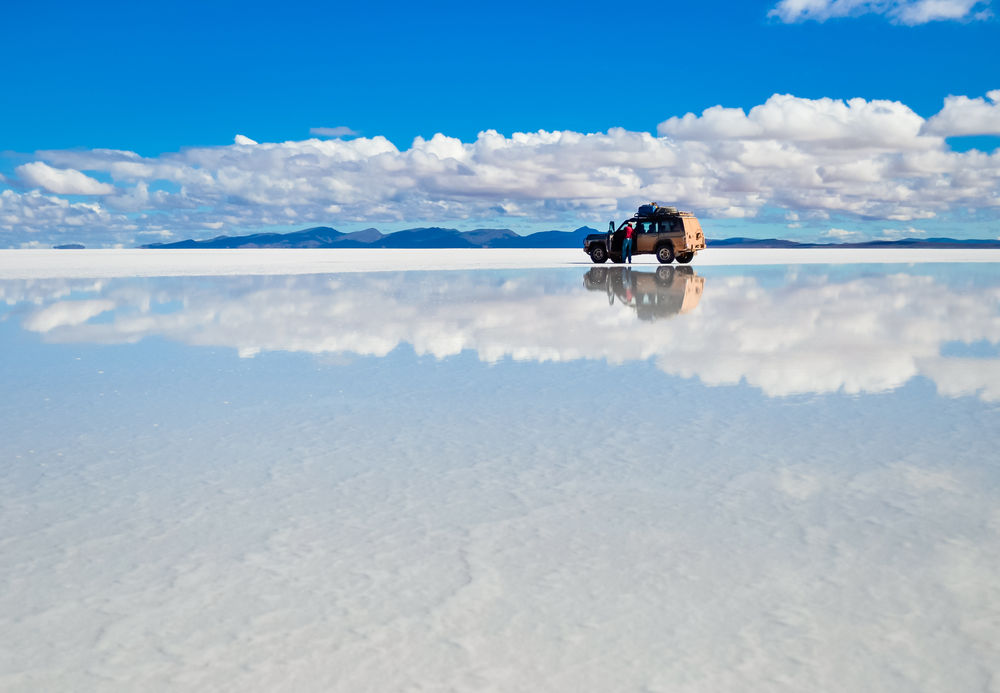 Beside the two big producers, the third vertex of the triangle is occupied by Bolivia, which, according to mining pundits, holds the 50-70% of the global lithium reserves. Aside from the huge reserves, the country is less gifted than his neighbors, as its deposits fall short of satisfactory infrastructure, Bolivia has no access to the ocean, and local lithium is more difficult to extract there than in the other parts of the triangle. Being a country deficient in funds, Bolivia would need to entice massive foreign investment to kick off high volume extraction. However, the capital attraction stumbles, as Evo Morales, the president standing up for indigenous rights, considers lithium as a strategic asset, and craves that the industrialization of this rare earth element take place in his country that otherwise regularly overlooks its investor’s interests. The reason behind this is that, according to his plans, lithium has an important role in the industrialization of the country, hence, the government would use state money to develop lithium industry.

Apparently, the three countries have greatly different approaches to the challenge the lithium boom poses. Still, there is one thing that appears to be common: in each of them, there are voices articulated at different levels which would like to prevent lithium extraction from becoming one of those one-time Latin American monocultures which bring tremendous wealth to big companies but provide local people with no means to attain a better economic situation.

Still and all, to proceed in this direction, it would be equally important that the three countries adjust their lithium policies so that foreign investors cannot turn them against each other. Until this does not become reality, the designation of “the Saudi Arabia of Lithium” will not be just another vague figure of speech.